In Los Angeles-based painter Christina Quarles’ artworks limbs, torsos, and faces merge with familiar domestic objects that have been distorted by her distinct color choices and gestural strokes, creating fluid portraits that capture the self and its relationship to its surroundings. Sometimes it’s difficult to tell if the figures are individual or multiple entities, and that’s sort of the point; her work seems to remind us that we are many things at once, and all connected.

What is it like to live in a body? This is a question at the center of Quarles’ art practice. Exploring the ways race, gender, and sexuality intersect to form complex identities, she seeks to dismantle assumptions through images that capture the body in a disorganized state that teeters on the border of excess and lack, according to her website.

The painter, a queer, cis-woman born to a Black father and a white mother, uses her paint brush to engage with the world via multi-dimensions and her daily experience with ambiguity.

Currently, her work is on view in a self-titled exhibit—her largest exhibition yet—at MCA Chicago until August 29th while another exhibit of her paintings is on display at the X Museum in Beijing until May 30th in an exhibition titled “Christina Quarles: Dance by tha Light of tha Moon.” This summer, a third exhibition titled “Christina Quarles: In Likeness“ will open at the South London Gallery on June 18th, her first major solo exhibition in London. This means that three global exhibitions of her work will overlap, which is a big deal for any artist.

While her main interests lie with race, gender and queerness, it’s less about the markers of race, gender, and queerness from looking at another person and more about how that sense of being is described by the greater society versus within communities, which can create a disconnect between how we see ourselves and how the world sees us.

Quarles grew up making art projects with family members; for example, an older cousin gave her art lessons as a birthday gift. Growing up with a single mother working in the film and television industry, the artist attended after school programs where she tried out different mediums and made doodles. “Doodling was sort of always what I loved to do as a kid,” she told Observer “All my notebooks were lined with doodles.” With a pen and a piece of paper, art gave her an opportunity to turn inward and explore her identity in relation to the world around her.

When she was 12 years old, she read in Seventeen Magazine about the LA County High School for the Arts, a local, tuition-free high school where she could focus on visual arts among other music, theater and dance students. That moment, she says, was a turning point for her; she decided she was going to become a serious artist. As she grew older, art became a gateway into a community of people she thought seemed interesting.

In high school, Quarles learned a lot of artistic principles that she still employs today. “I think that the interesting thing about art is that it’s about technique. It’s something that you just have to learn the practice of,” the artist explains. “It takes a lot of time but once you put those hours in, it starts to become something you can’t stop thinking about and other ideas start to flow through.” Though a lot of people believe talent is something that you’re born with, the artist thinks it is something that happens when you have a strong interest in something and maintain a practice over many years. That practice, she believes, allows innovative ideas to flow through the technique.

Having the support of a teacher in high school who taught her different figure drawing techniques made a big difference and she still uses many of those techniques today. “It’s very much about the physical muscle memory of drawing and really using that to create your piece,” she explains. She recalls that the teacher, Mr. Gato, would not allow the students to use anything more than charcoal dust or their finger tips for the first three minutes of drawing.

“We couldn’t actually lay down any hard decision-making marks and it was all about practicing how you would draw the figure after spending time really intensely looking at it,” she says. The teacher would yell at students who tried to use the tool before really surveying the figure. Outside of the Covid-19 pandemic, she still takes figure drawing classes.

Regarding her process, Quarles explains, “When I go to a canvas, I don’t have any sketches. I’m not referencing figure drawings visually, it’s more that I’m referencing the physical memory of drawing the figure and this sort of muscle that I’ve been working out, like any other muscle that you need to keep up with.” Her intuition comes from her consistent practice and creation of ongoing gestures.”

Along those lines, her art teacher taught her the importance of practicing line work by not erasing anything. “His advice was to just draw the correct line next to the incorrect line and fix it later.” She’s continued to practice this in her work, adding a sense of multiplicity and movement; as her figures move through space and morph into bodies she lays down marks but doesn’t take any away. Instead, she adds additional limbs if something isn’t situated the way she wants, and then ties them together.

Color-wise, she fills in Observer that, “I’m really looking for color that points to a certain mood or a certain sense of wholeness.” The color palette choices are meant to be in this sensory position and not an actual description of a reality.

“What I’ve learned throughout my life, it’s just sort of like, I just carry it all with me and keep adding to it,” she says, which seems like a metaphor for how we move through life, and how the ways we see ourselves contrasts with the ways others see us, as well. While we may want to find cohesion, there’s beauty in our separateness. 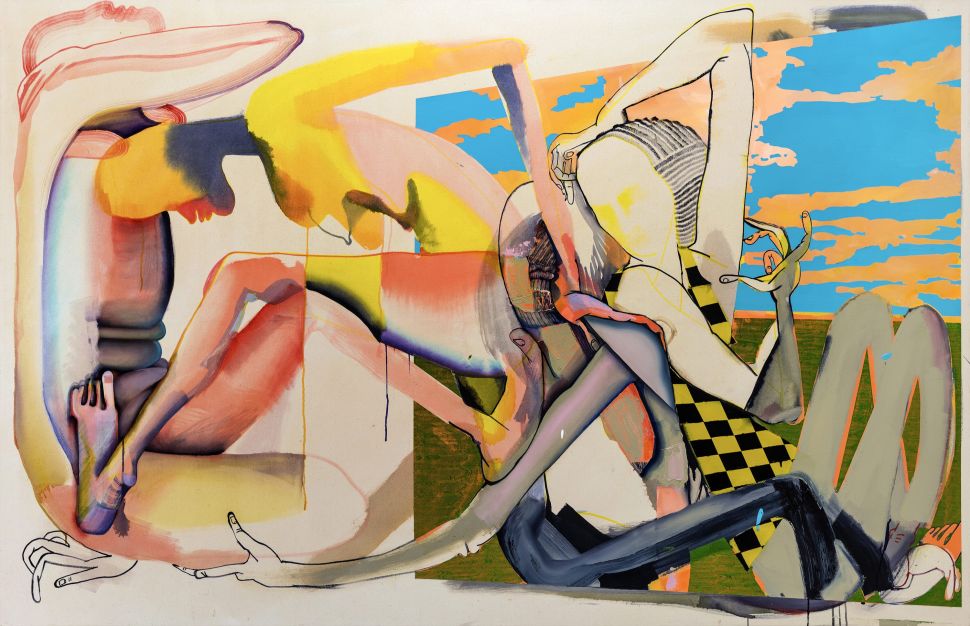