Late night television is historically topical, fresh and current and yet there’s a timeless element to the genre that has kept it at the forefront of the small screen for more than six decades. Opening monologues and celebrity guests are of the moment, but the idea of “Late Night” is a foundation of the very medium it now populates. Over the years, various hosts have established the mainstays of the genre, perfecting the formula, while others have challenged its form and function within reason. CNN’s The Story of Late Night, premiering Sunday at 9pm ET, and its companion podcast Behind the Desk, tracks the embryonic stages of this now well-worn TV territory, and its fluid evolutions over the last 60 years.

“Everybody since Johnny Carson adds little pieces to the genre, but interestingly keeps the foundation mostly the same,” executive producer, author and former New York Times media reporter Bill Carter told Observer. “You have a desk, you’ve got guests, and you have music. Those things stay the same, but each host brings their own unique personality to it.”

The series is nothing short of fascinating. It is at once applicable to older audiences who remember the early molders of America’s small screen pastime as well as younger viewers curious about the origins of our now deeply entrenched TV tropes. It’s a documentary with personality, a historical narrative with laughs.

With linear television declining and younger viewers eschewing the beloved entertainment franchises of previous generations, Late Night finds itself at a precarious position in the modern small screen landscape. Carter spoke to Observer about how The Story of Late Night conveys the complete narrative of Late Night’s existence and stretches into the future of what could be for the beloved format.

Observer: You’ve previously said that a psychological connection develops between an audience and a Late Night host because of the intimacy of inviting someone into your home every night. Why is that dynamic elevate with Late Night as opposed to other forms of TV?
Bill Carter: I think just the fact that it’s on late at night is a factor. A lot of people are either in bed or about to go to bed when they’re watching. Also, they watch by themselves late at night, they put it on, and it’s just like an individual talking to them and they connect with that. I also think the fact that it’s on multiple nights a week; not every show is now but certainly the traditional ones are on multiple nights a week. Over time a relationship develops, especially because the host, a lot of the ones that are great, start to talk about themselves. They talk about their families, they may talk about their parents, certainly when things happen to them when their parents pass away or something like that, they connect, they talk about it. And they’re telling you about events of the day also, very often. So it’s another way for people to sort of relate. They’re like, “Oh yeah, that’s on his mind too, or her mind too.” So I think there’s more of a connection just based on all of that kind of intimacy—the time, the place, and the personality that they’re presenting to you.

The Story of Late Night covers many of the different hosts in the early years of Late Night. How important was that variation and experimentation with different personalities and approaches for the development of the genre?
It was hugely important because when Steve Allen started it, no one knew what this was. And it’s so interesting to look at his early shows and the guy just has a yellow legal pad and he has names written out and he’s trying to figure out what to do next and the show was so long. It was 90 minutes nationally and an hour and 45 minutes in the New York market. So it was really a long show and you have a lot of guests and it was a ton of talk back then. But they didn’t know what they were doing, they thought it would be kind of like the Today Show with news and sports. They even had crazy weather reports early on. They were totally experimenting and they didn’t know what it was. All Steve Allen knew was that he was going to be funny, that he was going to use the time to try and look and come up with funny ideas. So that makes you think okay it’s not a news show, it’s not a Today Show, it’s actually an entertainment show. And that really was important.

It’s something of a discovery tool for audiences who may not be familiar with how many of the mainstays of the genre came to be.
What I think you’ll see as you go forward, the very interesting things that laid out by happenstance, there’s a great section in the second episode about [Johnny] Carson became famous for bringing on new stand up comics. And it became a thing, if you were going to be a successful comedian in America it was life and death to get on the show with Carson. And it scared guys so much, like George Lopez tells a story, he said, “I’ve been incarcerated and I was not as afraid as I was when I walked out on The Tonight Show.”

It became a thing for comics to break out on The Tonight Show. And then you bring in someone like Letterman who does this entire deconstruction of the show where he basically plays with every aspect of it, the timing of it and the angles of it and all of that because he was a brilliant broadcaster. And then Jon Stewart comes along and turns it into a faux newscast. And it just became a thing you could play with, put your own stamp on it. But it always has a certain DNA.

Linear television is desperately fighting and often losing to remain a piece of the monoculture thanks to streaming and the fragmented nature of how we consume entertainment nowadays. What does the future hold for the Late Night genre? It exists today in such a different viewing culture than even just 15 years ago.
No question, no question. And we do address that in the last episode of what the future is going to be like. And we talk to people, the newer people, like Desus and Mero and Amber Ruffin. What is interesting is streaming, which is a fascinating and valuable thing that’s been added to the entertainment culture, is not really great for a late night show because most late night shows are topical and focused on that day. And streaming is built to be available all the time and it’s meant to be timeless actually. You don’t know what time it’s on, you just decide to watch it. So there’s a different aspect to that and I sense that we’re going to have more people doing different, interesting things.

There’s going to be kind of a continuum. I just don’t think the root base of the Tonight Show that was created by Steve Allen will totally go away. And if it did, there’s so many of them now, if they all decided to go by the wayside and only one remained, I think it would do really well. If you only had the Tonight Show as you did for many, many years—I mean many tried to compete with Carson but it was futile. I think people will still want one of those if a lot of them went away.

What are some of the major development and innovations you’ve noticed that separate the Late Night of today from the Carson era?
I think what Carson really did was make the monologue topical. He really jumped on the news. And that is now taken a new step forward with Jon Stewart because he was satirizing the news but he was using a point of view. Johnny Carson did not expose his point of view, you didn’t know where he really stood on the Vietnam war. He would make fun of it but he wasn’t taking a stand. And to me the introduction of point of view has been an enormous change and it carried over because obviously [Stephen] Colbert then did point of view but backwards on The Colbert Report. He was giving the opposite point of view to his own. And then the Trump era really forced all of the hosts to take a stand and say this is outrageous and they really were way, way more outspoken than anybody in the Carson era or before, way more outspoken in their views. And I think once they started doing that, they weren’t going to go back.

Is Late Night television sustainable moving forward even as TV changes rapidly?
It is sustainable. I just think people love it. There’s like 12 shows now. So somebody likes this style clearly they just don’t watch them all together at the same time. That element of it, when 40 million people watched Tiny Tim get married on the Johnny Carson show—by the way that’s bigger than the population of Poland. That isn’t going to happen. Jimmy Fallon’s audience has diminished from when he started. But if you add up his five nights of the week, there’s a lot of people watching still. He might get 6, 7, 8 million people watching which is so rare in television right now, very rare to get that kind of audience. So it still has that appeal and I feel like people like the idea of outrageous, fresh comic voices. Late night is where they go, that’s where they gravitate to.


If you were made President of Late Night, what are some changes you would make?
I’d get a woman on the air, really fast. Because I just think that’s terrible. I mean Lily Singh is on NBC but she’s on in the middle of the night really crazy late. And I would really pay attention to Amber Ruffin, I think she’s fantastic. I would probably try to change up the format where you just bring on guests and promote their next movie or something but that’s really a driver to why you get big name guests to come on. I’d just mix it up a little more. I’d probably put more comedy in the middle of the show. Conan [O’Brien] did a lot of this by the way. He played with the format brilliantly in his NBC years. But I just want that and I’d always be looking for fresh voices for sure.

The Story of Late Night will premiere on CNN 5/2 at 9pm ET. 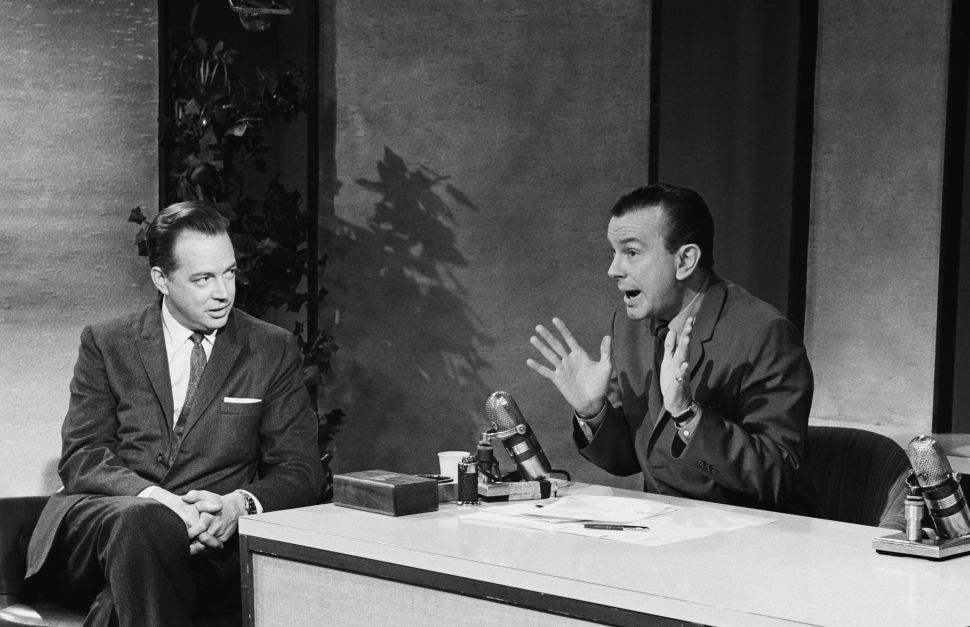