Since the 1970s, New York photographer Dawoud Bey has been photographing Black culture. From sidewalks to living rooms and inside the church pews, he has become an essential voice in unpacking African American history, politics and culture.

Now, a new retrospective on view at the Whitney Museum of American Art in New York is opening on April 17th, featuring roughly 80 pieces that trace Bey’s career from 1975 to 2017. From portraits in Harlem to moody landscapes and lively group shots, this exhibition tells the stories of Black life, up close and personal.

“Dawoud Bey: An American Project“ runs until October 3rd. It features early photographs shot on the streets of New York in the 1970s to his famed projects, like “The Birmingham Project” from 2012 and “Night Coming Tenderly, Black” from 2017, and beyond.

Co-curated by Elisabeth Sherman and Corey Keller, the exhibition is about really seeing America for what it is. “The title of the exhibition inserts Dawoud’s photographs into a long-running conversation about what it means to represent America with a camera,” Sherman tells Observer.

“It also hopefully suggests the idea that ‘America,’ as a concept, is a work in progress, and points to the way in which Dawoud’s work strives to draw attention to, and therefore amplify, those voices and perspectives that have historically been excluded from this idea.”

Bey was one of the first African American photographers in recent history who photographed Black subjects in everyday life, helping introduce blackness in the context of fine art, long before it was accepted, or even mainstream.

Some of the exhibition highlights his photos taken in Syracuse in the 1980s, like one called A Young Woman Waiting for the Bus, or another poetic shot (with perfect lighting) called A Man on the way to the Cleaners, which was shot in Brooklyn in 1990. They’re all very honest photos, yet there remains a sense of mystery.

“Dawoud’s portraits manage to convey—in a way that is truly quite rare—the present, vital humanity of his subjects,” said Sherman. “When you stand in front of his photographs, you almost feel as if you are directly engaging with the person you are looking at.”

The exhibition sheds light on the life of New Yorkers in the 1980s, what their lives were like in their everyday life, while in transit, or simply out for a walk. Beyond your average snapshot, Bey has elevated his portraits into classic art through his black-and-white lens, capturing pensive moments, elegantly stylized figures and immaculate lighting. They’re almost film noir of the everyday.

“Dawoud has been making work for over 40 years that has sought to highlight voices and perspectives that have remained underrepresented or even unseen as a result of the structural racism that underpins all of American society,” said Sherman.

In A Woman at Fulton Street and Washington Avenue, from 1988, a stylish woman stands in the streets wearing sunglasses and an oversized hat, looking onward. She knew she was being photographed and Bey had to develop a connection with his subjects to get these instantaneous moments that seem to stand the test of time.

Bey was born in Jamaica, Queens in 1953, changing his surname from “Smikle” to “Bey” in the early 1970s, studied at the School of Visual Arts shortly and then graduated with a MFA from Yale University in 1993. He counted Roy Decarava and James Van Der Zee as early inspiration for his artworks and often returns to youth culture as inspiration.

Bey, in 1995, said: “My interest in young people has to do with the fact that they are the arbiters of style in the community; their appearance speaks most strongly of how a community of people defines themselves at a particular historical moment.”

It offers insight when looking at his photo called A Boy Eating a Foxy Pop, shot in Brooklyn in 1988, where he captured a youngster in a quiet moment in the summer heat.

And in “The Birmingham Project,” where Bey memorializes the child victims of the 16th Street Baptist Church bombing in Birmingham, Alabama, from September 15, 1963. Each double portrait shows a child (the same age as the girls who died in the bombing, all of whom were between the ages of 11 and 14 years old) alongside an adult born the same year as the girls (roughly 1949 to 1952), to show how old the girls would be, should they be alive today. It provides the contrast necessary to understand the devastation to the lives that were lost.

If there’s anything Bey can convey in his photos, it’s raw emotion. Sadness, joy and just plain contentment all come across clearly in what he wants to portray.

One of his most iconic works in the exhibition includes Two Girls from a Marching Band, shot in Harlem in 1990, with two girls holding up their musical instruments, either before or after their performance.

There are landscapes, too. Untitled #20 (Farmhouse and Picket Fence I), shows a home as part of his “Night Coming Tenderly, Black,” series from 2017, where he re-creates the path of where slaves escaped the Underground Railroad. By capturing rural landscapes, he wanted to show them as somewhat timeless, as much of the actual landscapes have stayed the same.

There are color photos, too. As part of his color Polaroid series from the 1990s, there are photos of the cool kids, including Martina and Rhonda, shot in Chicago in 1993, and Kenosha II, from 1996, all wearing garb from the iconic era, a time when old school hip hop hit the mainstream.

Bey recently wrote on Instagram that along with the protests over the past year, it has brought a radical reconsideration of museums and their place in society. That they’re finally striving to achieve equity.

“I for one still believe in museums as spaces of possibilities and have always sought to have my work shift the equation inside of that institutional space,” writes Bey.

“While we began organizing this show long before the events of 2020, we are opening it to a world where these conversations are taking place more openly and more directly than ever before,” said Sherman. “This work is always timely and urgent, no matter the context.” 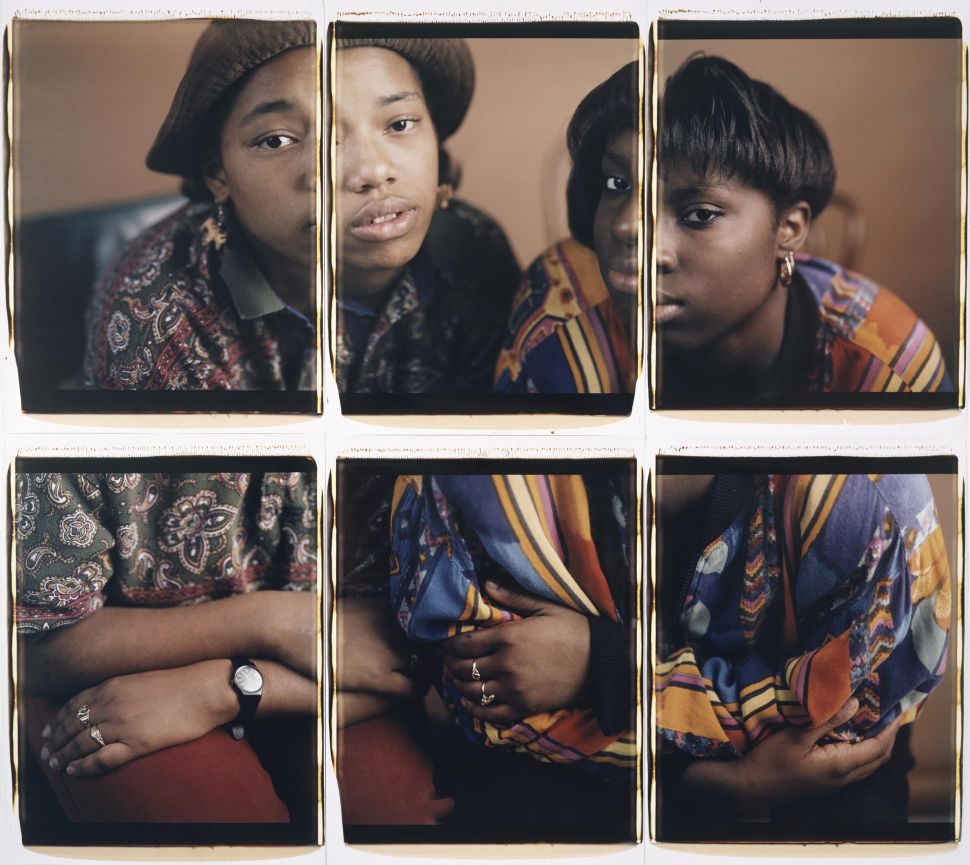