It may come as an understatement to say that Demon Slayer: Kimetsu no Yaiba the Movie: Mugen Train has a lot of hype surrounding it. The continuation of one of the most popular anime right now (it won Anime of the Year after its first season and made several best-of-the-decade lists), Mugen Train burst through several notable box office records, outgrossing last year’s Tenet despite screening in just a handful of countries, and overtaking the hugely popular Your Name and the cultural juggernaut that was Spirited Away to become the highest-grossing Japanese film of all time and the highest-grossing anime film of all time. This franchise keeps surprising and blowing away expectations, which is why it’s so delightfully shocking that Mugen Train actually lives up to its hype.

From the opening scene, it is clear that Mugen Train is far from the standalone, non-canon anime films that normally reach theaters. We follow Tanjiro (Natsuki Hanae), his demonic sister Nezuko (Akari Kitō), Inosuke (Yoshitsugu Matsuoka), Zenitsu (Hiro Shimono) as they are called to help the Flame Pillar Kyōjurō Rengoku (Satoshi Hino) investigate a series of disappearances on the titular Mugen (Infinity) Train. Rather than spend 20 minutes explaining the premise of the franchise and re-introducing the main characters, we’re thrown right into the action, which picks up immediately where the first season left off. Though there might be a bit of whiplash for newcomers without prior knowledge of Demon Slayer, the basics of the story are sewn effortlessly into the subtle dialogue.

After a brief fight with some demons on board, our young slayers find themselves trapped inside their dreams by the demon Enmu (Akira Ishida), where they are haunted by both pleasant memories and past regrets. One of the ways Demon Slayer managed to stand out among other shonen anime was by combining classic shonen tropes with horror imagery, and there is enough gore and body horror for the film to earn its R-rating. It’s honestly shocking at times to see an anime film like this go to such grim places, but Mugen Train always balances out its terrors with some morbidly dark humor and great comedic timing, cutting away right before a fatal blow to a slapstick joke.

All the bleak imagery does more than just make the film a perfect Halloween-watch; it also makes the emotional moments all the more heart-wrenching. Mugen Train may be light in character development, but what little we get is effective enough to make the tears flow like waterfalls by the end of the film. Despite only appearing ever so briefly in the show, this is undoubtedly Rengoku’s story, hands down. Sure, Zenitsu and Inosuke are serviceable as comic relief and side characters, and Tanjiro’s dream sequences are loaded with pathos and perfectly encapsulate the film’s (and show’s) themes of family, regret, and self-shame, but the film belongs to the young demon slayer of bright and fiery yellow hair, and incredible eyebrows. For a character we learn about mostly in the 117-minute runtime of Mugen Train, Rengoku has a surprising amount of emotional impact that slowly builds a connection to the audience before you even notice. His backstory is tragic without feeling soapy, his personality pops up the instant he’s on-screen, and his fighting skills are awe-inspiring.

The first season of Demon Slayer already boasted the best fight scenes in the anime industry, and Studio Ufotable was able to kick things to the next level, even if the CG for Enmu looks goofy and unpolished at times. Ufotable’s dynamic 3D backgrounds and digital compositing rival any Studio Ghibli or Kyoto Animation film, and fans of the show’s famous episode 19 have a lot to look forward to. Series director Haruo Sotozaki returns to make fight scene after fight scene match or even surpass the breathtaking animation of that episode, achieving complex camera movements and fluid character animation while combining bright and saturated colors with the gory violence to create a unique visual style.

Just as in the TV show, Mugen Train finds a way to make the fight scenes do more than just provide exhilarating action, by injecting a healthy amount of emotion into them. Every swing of a sword, every parry, every shout in pain serves not only to raise the hype but to add emotional context to the characters’ journey. Add in Yuki Kajiura and Gō Shiina’s operatic soundtrack, plus LiSA’s (who also sung the series’ opening theme) brilliant single “Homura,” and you get a grand and epic climax that will leave no dry eye in the theater.

Did Mugen Train need to be a feature film? Based on how short the story arc is, and the graphic and mature content of the story, yes. Does it live up to the hype? Without question. Mugen Train arrives in theaters with overwhelming anticipation and expectations, yet it manages to pay off some of the loose ends from the first season, continue the emotional development of our main character, introduce a new fan-favorite character, build even more anticipation for the upcoming second season of the show, all while presenting a compelling animated blockbuster that is, in the purest definition of the word, a crowd-pleaser. 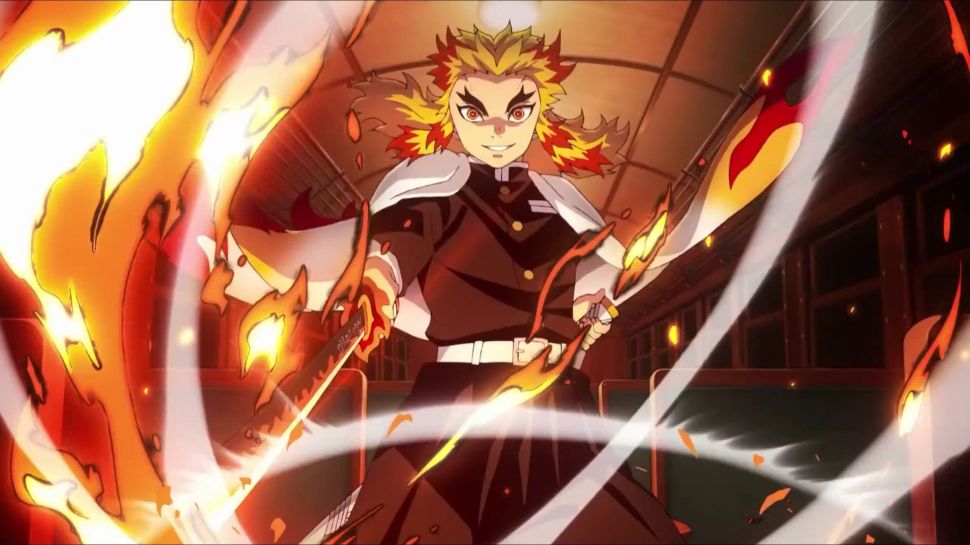