Everybody with a passion for the arts in New York City knows about Dia Beacon, the cavernous upstate museum that allows artists to run wild with innovative installations and which was conceived as a work of art in and of itself. Just as essential to the Dia Art Foundation, however, is Dia Chelsea, the series of interconnected gallery spaces that’s had a presence in West Chelsea, Manhattan dating back to 1987. On April 16th, after a 2-year renovation process that was plotted out by ARO Architects and that cost $20 million, Dia Chelsea will reopen to the public. The event is being christened with a new commission by Lucy Raven, a multidisciplinary artist whose work has been exhibited at Mass MoCA, the Whitney Museum of American Art and many others.

On Tuesday, Jessica Morgan, the Director of the Dia Art Foundation, spoke to early visitors to Dia Chelsea about the conception behind the updated space. For a while, Morgan said, conversations percolated about whether Dia Chelsea should be housed in an entirely new building or a new neighborhood altogether. After bringing artists into the conversation, the decision was ultimately made that renovations should take place at the original location. “We are very artist-focused,” Morgan said, “and this type of single-story industrial space was very much what artists wanted.”

“It’s really incredible to be invited to develop this show, which is truly something that I couldn’t have done on my own,” Raven, who was also present, added. The project, which ultimately clocks in at 32,500 square feet, includes 20,000 square feet of street-level exhibition space that merges all three of Dia’s 22nd street Chelsea buildings. The exhibition spaces also both have huge entrances that open out onto the street, opening up possibilities for performances that blur the line between indoors and outdoors; additionally, this means that huge sculpture and all manner of artistic materials can be brought into the space.

For this week’s inaugural show, the Lucy Raven film Ready Mix and an installation from her Casters (2021) series beautifully illustrated ways in which the cavernous spaces could be used. The Casters installation featured roving spotlights in a darkened room that evoked the marked ominousness of surveillance, while Ready Mix hypnotized with its shots of industrial construction in process. Even as you watched human machinery altering the Earth in a destructive way, the sight of dirt our concrete pouring from a truck in slow motion was almost sexual. 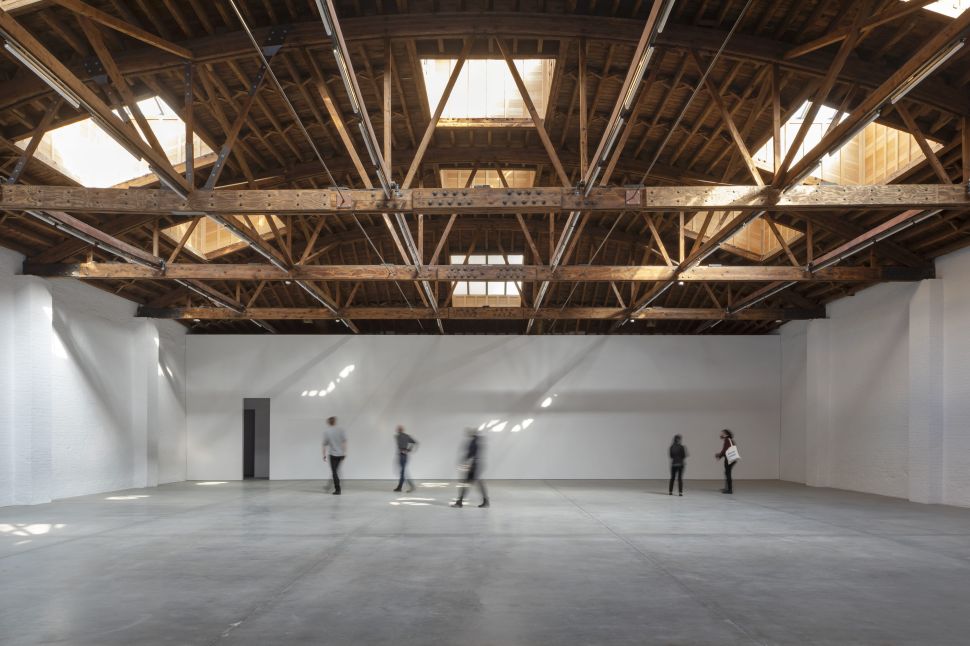