Panic over the end of the nuclear family is as high as ever. Fear that the traditional family unit is dissolving has not lessened due to visibility, queerness and family are still considered oil and . This is self-evident in both trans panic and the difficulty of LGBT people to adopt. Instead, queer family has become a term used to describe loose groups of friends trying to fill these big roles in each other’s lives.

The queer family plays a pivotal role in the sitcoms of Josh Thomas. His first, Please Like Me chronicled the life of a fictional “Josh” as he came out and struggled to take care of his bipolar mum and figure out his own path in life among his twentysomething friends. Thomas’ second sitcom, Everything’s Gonna Be Okay currently airs on Freeform among a burgeoning roster of  socially progressive utopian shows for young adults. It features Thomas as Nicholas, a thirtysomething who takes care of his siblings in California after his dad passes away. Nicholas, like Thomas, is gay and spends most of the first season in a cute if not difficult relationship. Like Please Like Me, the show deals with neurodiversity. Matilda is an autistic high school senior who navigates dating and the college admissions process. Matilda is played by the incredible Kayla Cromer, who is herself autistic. In a recent New Yorker profile, Thomas announced he too was autistic, something he discovered after talking to advisers on the show.

Authenticity is at the core of these utopian sitcoms. The auteur sitcom is created in the hopes of giving a voice, yet Thomas has come under fire for his discussions of casting, whether on Cameron Esposito’s podcast Queery for his take on casting gay actors in gay roles or comments in 2016 about finding it difficult to find talented actors of colors. Thomas has since apologized, and in the wake of that apology, the second season of Everything’s Gonna Be Okay has arrived.

This is creator Josh Thomas’ speciality, combining idiosyncratic takes on loneliness, depression or sex and infusing them with a healthy laugh.

The sitcom has historically functioned as a mirror for the nuclear family, slow to include outsiders and working to cast certain behavior as acceptable and others as special issue episodes. The amount of after-school specials on characters wondering whether or not to lose their virginity or to try drugs infiltrates even the most socially aware millennial sitcom. These issues certainly come up in Thomas’ sitcoms, but usually only to be disarmed by jokes or a plain-spoken tenderness. In one episode of Please Like Me, one of Josh’s friends gets an abortion. What starts as a “very special” episode ends with a character wearing a Godzilla costume while smashing cardboard buildings to triumphant music. This is Thomas’ speciality, combining idiosyncratic takes on loneliness, depression or sex and infusing them with a healthy laugh. In both sitcoms, every time a character lays depressed in bed they also yell through a pillow, laying their pain bare yet muffled. The small casts emphasize Thomas’ take on the sitcom. People’s intimate dramas are usually smaller than they make them out to be. This is part of the joke, characters often taking bits to further and further extremes, whether Josh locking a character in a room for a day or Nicholas throwing ceviche in a bath.

It’s telling that a sitcom about a gay man adopting two kids is gaining popularity. In his recent New Yorker essay, “The Untold Story of Queer Foster Families” Michael Waters explores the complicated history of queer families in the U.S. Waters follows the story of kids who were openly gay going from one abusive household to another, until as some discovered, “the Washington State Department of Social and Health Services had, it turned out, been quietly placing gay adolescents in gay homes for several years.” The article also traces the placement of a 15-year-old in a gay household, despite the fact that sodomy laws were in place at the time. Still, Waters dissects the difficulty of such arrangements, of marginalized people taking care of other marginalized people. In 1979, John Kuiper became the “first openly gay man or lesbian to publicly adopt a child in the United States” according to historian Daniel Rivers. Waters ends his essay by reminding the reader that, in 2021, it is still legal in many states for adoption and foster-care agencies to discriminate against parents “on the basis of both sexuality and gender identity.”

Nicholas is an intriguing father figure. He is selfish, difficult and angry. At the same time, even his misguided attempts at responsibility are for his siblings. In the first season he considers breaking up with his boyfriend since his sister “hates him.” “I don’t hate him,” she quips. Nicholas can also be caring, whether offering soup to his sibling’s romantic interests or giving sibling pep talks on hikes about grades and independence. We watch with glee as a queened up Nicholas, his nails an electric blue, storms the principal’s office in defense of his sister.

While an awkward follow-up at times, Everything’s Gonna Be Okay brings a larger platform for Thomas. It adapts a lyrical editing style, showing close-ups of bugs and drag queens with the same visual flourish that Please Like Me brought to suburban Australia. The new show ends with sweet credit sequences, often Nicholas’ sister Genevieve (Maeve Press) will recite nonsensical poems. The poetic editing style of the shows usually mirrors the shows’ exploration of murky feelings, but occasionally it can cut an already fractured narrative. Here the family narrative is never A to B, and there are rarely familial cleanups around a dinner table. More often than not Nicholas falls into bed, exhausted and defeated by attempting to learn how to raise kids.

Watching these characters struggle, we wonder if everything will be okay. Yet we also know, after decades of sitcoms, the heterosexual family is at least as equally disturbed.

Please Like Me took the opposite approach, following kids of immature adults trying to build their own community, even if they fell into codependent relationships with each other. Josh would cook meals for whoever showed up in his house throughout the episode, exes, friends, hookups and the occasional unruly family member. Josh struggled to balance his own life with that of his mother, who was in and out of psychiatric wards.

Watching these characters struggle, we wonder if everything will be okay. Yet we also know, after decades of sitcoms, the heterosexual family is at least as equally disturbed. Pathologizing families, straight or gay, is a favorite pastime of everyone’s. Whether it’s queer people thinking through inherited trauma on Twitter or conservatives believing people’s orientations or gender are based on absent fathers or mothers. Representation can easily be framed as a need to see ourselves reflected on screen. But I don’t always need to see myself on the screen. Sometimes I’d rather watch someone make even more of a mess of their lives than I do. 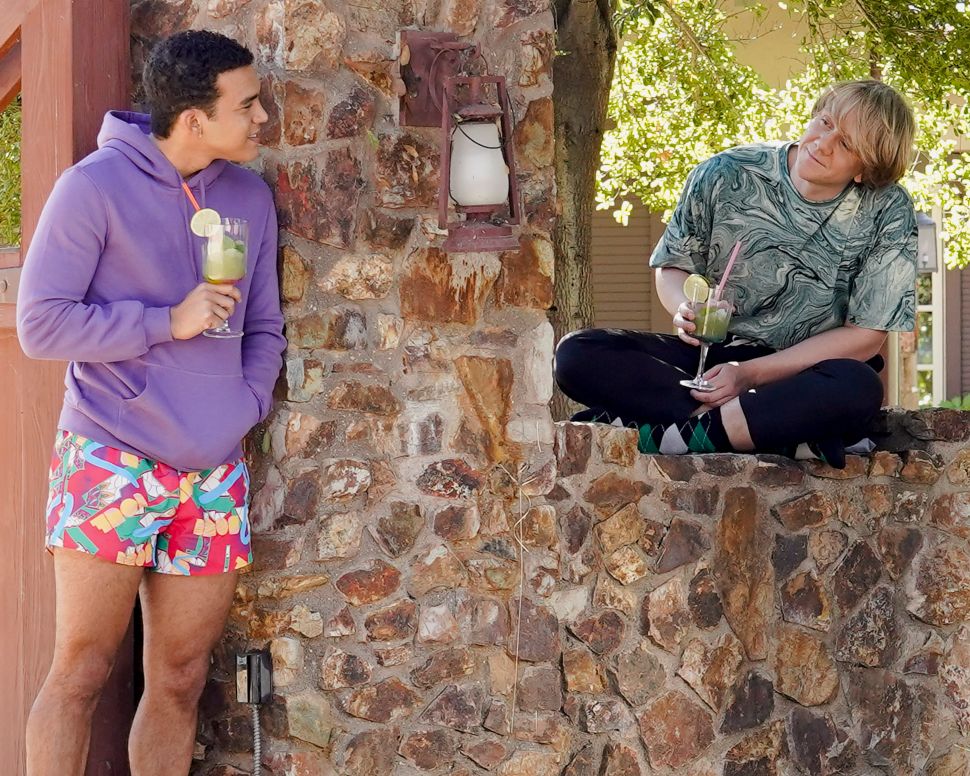