Brain-computer interface, or BCI, is the ultimate dream of artificial intelligence-obsessed entrepreneurs. The technology is often hyped by Tesla and SpaceX CEO Elon Musk, whose biotech startup Neuralink is developing an implantable brain chip aimed to “merge biological intelligence with machine intelligence.” That device is still years away from commercialization, but some of its envisioned functionalities have been realized by a barely-known startup born out of a Washington University lab—with the full backing of the FDA.

Last week, the FDA authorized the first device falling under the BCI category, a robotic wearable called IpsiHand developed by Washington University startup Neurolutions. The wearable is designed to help people disabled by a stroke regain control over their arm and hand function by using their thoughts.

IpsiHand consists of two parts: a wireless exoskeleton that fits over a patient’s hand and wrist and a small headpiece that records brain activity using non-invasive electroencephalography (EEG) electrodes.

The underlying science is discovered by a team of researchers led Eric Leuthardt, a professor of neurosurgery at Washington University School of Medicine in St. Louis. It’s well understood that each side of the human brain controls movement on the opposite side of the body. For example, if a person suffers a stroke in the right side of his brain, he will likely experience mobility impairment on the left side of the body. About a decade ago, Leuthardt’s team found that brain signals for body movement, known as ipsilateral brain signals, can be detected on the same side of the brain as well. The issue is that when the opposite side of the brain is damaged, these signals become useless.

The idea behind EpsiHand is to find a way to detect those ipsilateral signals with noninvasive EEG and use them to control an electronic hand brace.

Leuthardt cofounded Neurolutions in 2007 with Daniel Moran, a professor of biomedical engineering at Washington University, to commercialize this technology.

“Generally, any motor impairments experienced by a patient six months after a stroke have been considered permanent,” Leuthardt said in an interview this week. “What we’ve found with this device is that many patients can get a meaningful improvement in recovery of upper extremity movement when we wouldn’t expect them to get any. That’s not really true for any of the current therapies for stroke aimed at restoring function after the initial recovery period.”

“People have been trying for a long time to convert BCI from an experimental technology into something that will truly help patients,” he added. “With this, we’ve shown that BCI is finally ready for prime time. I sincerely hope there are many more such devices to follow.”

The IpsiHand system is approved for use in patients age 18 and older undergoing stroke rehabilitation. Neurolutions aims to make the device available in hospitals and clinics by the end of 2021. 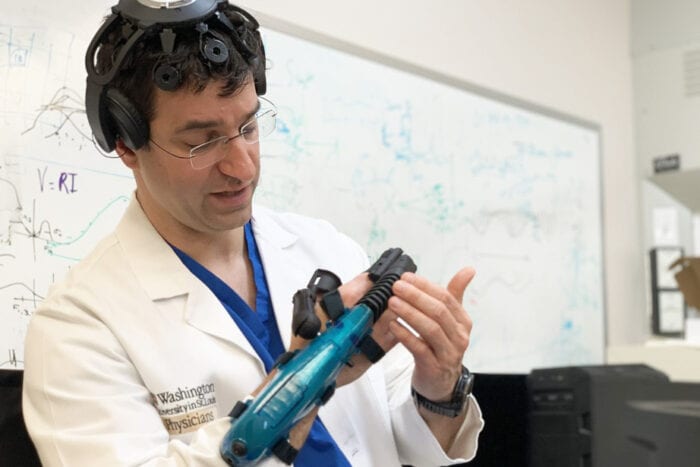