As climate changes, sea levels rise, people displace, and the art surrounding it becomes more urgent. Aicon Gallery’s “Fresh Earth” exhibit, on view until April 17th, plugs into urgency with its earthy, historically-minded art, centering the viewpoints of four, globally-located South Asian artists. As a unified show, “Fresh Earth” carefully considers colonization’s far-reaching effect on the environment at-large and specifically in South Asia, which has already suffered the worst effects of a world that experienced record-setting high temperatures this past decade.

This art attempts to cultivate a collective identity from shared history and nature. The dark collages Kolkata-based artist Jayashree Chakravarty makes out of natural materials focuses on the latter, considering the complex beauty of the environment and how long we allow it to stay that way. Soaring to the skies is like the future told in tea leaves, primarily made out of the material along with dried flowers, roots, and seeds, all unified under a blanket of black acrylic paint. Nature’s remnants build off of each other and pull away — dried flowers coalesce like a hairy cloud, leaves scatter and shoot outwards like dregs you can’t wash away. It suggests a permanence and power in nature, also found in Chakravarty’s Blooming flowers, which exhales the ghostly body of a deconstructed flower out of the same materials. These pieces are somber, they’re cluttered and crushed with their bits, but they encourage a recontextualization of nature, which is too often overlooked, painted black, cut down to make way for apartment buildings and shopping malls. Mounted to the wall, overlooked natural products like dry leaves and jute are centered and proudly exist.

Denver-based Suchitra Mattai’s work also incorporates nontraditional materials, but these are byproducts of a human life rather than nature. All of her pieces in “Fresh Earth” incorporate vintage materials, like Skin, an installation made of glass Erlenmeyer flasks filled with varying amounts of sugar resting on top of vintage encyclopedias. The Erlenmeyer flasks line the wall in a clean 7×11 grid, coming across initially as scientific and cold, a strange brick wall contained within itself. But the sugar inside of the flasks, the pieces of the past the flasks use as a nondescript surface, whisper a clinical view of colonized Guyana, where Mattai’s Indian ancestors worked as indentured servants on a sugar plantation.

It’s different to the tangled warmth of Tethered, which uses tightly wound vintage saris as a sculpting tool. It’s a vibrant and unifying piece, with a looser sari sculpture on the ground lifting towards the more whole piece like it wanted to become more whole, too. These intertwining saris hold the intertwining histories of the women that wore them, a show of unity and shared identity for part of the world with a complex relationship to it. The countries that make up South Asia have not really been unified since 1947, when it was haphazardly broken apart by a retreating British Empire that finally recognized (and wrongly allotted) its diversity.

Unification and immediate action have both recently been called for in response to the extremely perilous position many South Asian countries are currently in. It has been estimated that by 2050, 63 million migrants will be forced from their homes due to inhospitable drought, community-clearing floods, and frequent, deadly natural disasters in South Asia. In 2020 alone, global temperatures have risen enough to cause frequent and extreme rainfall, destroying communities and effecting over 4 million people. South Asia’s climate plan going forward is still unclear, partly due to the socio-political ramifications of going carbon-neutral in a place that colonialism left economically gutted.

What happens next is a big, difficult question, and so the artists of “Fresh Earth” zoom out, letting the patterns, colors, and feelings of shared history speak for themselves. Nadia Kaabi-Linke, who is based in Berlin, makes the metaphorical rocky, disjointedness of capitalism physical with her installation NYSE Road Works (Remont III). The site-specific installation is made up of unfixed granite paving stones, a stoic but unbalanced road. Associating it with the New York Stock Exchange, the world’s largest and site for general callousness and power imbalance, is a physical translation of capitalism’s dangerous road to nowhere. New York’s Rina Banerjee takes a more unmoored approach to capitalism and colonization history, especially in her titles, which often read like doomed poems, such as: A world Lost: after the original island, single land mass fractured, after populations migrated, after pollution revealed itself and as cultural locations once separated merged, after the splitting of Adam and Eve, Shiva and Shakti, of race black and white, of culture East and West, after animals diminished, after seas’ corals did exterminate, after this and at last imagine all evaporated…this after Columbus found it we lost it imagine this.

It’s the title for an installation made up of synthetic horns, ostrich eggs, pebbles, and coins, among other ephemera, as if it was created by a weary collector seagull or a magician. The horned, wiry nest hangs above a powdery ground that’s bleeding with red thread, knocked-over plastic cups, and dotted with human and animal figurines. An evil hot air balloon over a destroyed planet’s remains. It’s hard to look at, everything the red thread touches seems to be oozing — the blood is inescapable — and the title is full of implications. The last line in the piece’s title, after columbus found it we lost it imagine this, is tacked on like a rushed, embarrassed afterthought, but its use of “we” asks viewers to feel responsible for this loss. Banerjee is haunted by the violence done to the earth and the violence that happened on it, and she wants us to feel haunted too. Like the rest of “Fresh Earth,” this piece grabs the climate crisis with talons sinking in, puncturing the problems that have always lurked under this environmental issue. Each piece considers a different angle of the problem, like race, money, and politics, brushing clean forgotten historical wounds, hoping we confront them long enough to heal them. When we recognize what got us here, maybe we can begin again. 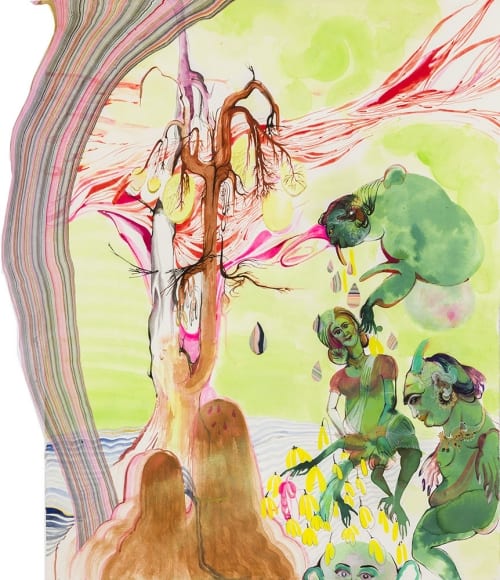