Hollywood exists in a perpetual state of purgatory where nothing and everything is both finite and infinite. For example, the James Bond franchise will seemingly exist forever, but good luck licensing those movies in a single location for the same amount of time. Endless routes are constantly broken up into well-defined detours in the entertainment industry. Ad infinitum always comes with an asterisk.

To that point, Godzilla vs. Kong brings together two historical cinematic titans that can trace their on-screen existences back to 1933 and 1954, respectively. Yet despite the early success the film is enjoying, the future of the franchise is anything but clear. Due to complicated contractual agreements, it’s unknown if the MonsterVerse can legally continue in its current form.

Is Godzilla vs. Kong a sequel-warranting “hit?”

“It was more designed in the sense in the way that Avengers: Endgame was kind of designed as a culmination point, not necessarily an ending, for the Marvel movies,” director Adam Wingard recently told Polygon. He added: “But we are at a crossroads where, you know, the audiences have to show up and fulfill the financial end of things. If this is a success, then you bet your ass there’ll be more.”

“To become arguably the first cinematic event of the pandemic means more than sheer dollars and cents. The fact that it over-performed financially is a huge win.”

Godzilla vs. Kong has taken in $285 million in just 12 days in theaters as of this writing, putting it on pace to become the single-most successful film of the pandemic. In the United States, the film opened to $48.5 million in its first five days, including a pandemic-best $32.5 million three-day opening. Its box office results are so strong thus far that shares of AMC Entertainment, the largest theater chain in the world, shot up more than 16% in midday trading Monday. Other exhibitors such as Imax, Cinemark, and National CineMedia have also seen their stocks rise in the post-release wake.

“Godzilla vs. Kong has already reached the milestone it needed to lock in a sequel because what the box office represents in these circumstances is more important than the actual financial revenues,” Paul Dergarabedian, senior analyst at Comscore, told Observer. “To become arguably the first cinematic event of the pandemic means more than sheer dollars and cents. The fact that it over-performed financially is a huge win. That’s the currency that matters.”

The film has also garnered a larger viewing audience than any other film or show on HBO Max over the first four days of its availability since the service’s launch, according to Andy Forssell, executive vice president and general manager of direct-to-consumer at WarnerMedia. That’s a vague platitude that does not provide any specific numbers to gauge. But based on the film’s box office success, its HBO Max viewership is likely impressive.

According to streaming guide Reelgood, which tracks every movie and series available online, Godzilla vs. Kong (8.1%) enjoyed the strongest opening weekend share of streaming and engagement on HBO Max of all SVOD movie openings in Q1 2021. (As a search engine function, audiences primarily use Reelgood to find where shows and movies are streaming, which can occasionally favor titles with less availability or audience awareness). 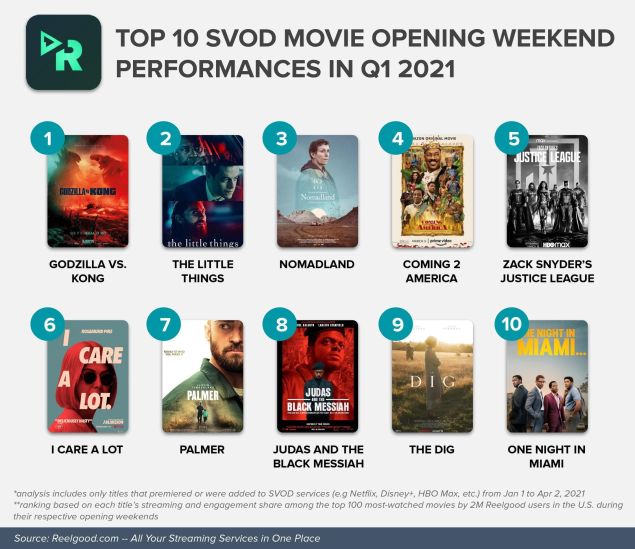 According to Samba TV, 3.6 million U.S. households watched at least five minutes of Godzilla vs. Kong in the first five days after release. It’s worth noting, however, that this is extrapolated from a select group of opt-in smart TV users and does not account for non-TV devices.

GvK is the pinnacle of Legendary’s MonsterVerse, a shared cinematic universe made possible only through deft deal-making and cooperation between multiple corporate entities. It’s the result of a licensing agreement between Legendary and Toho Ltd. that allows the former access to the Godzilla character and agreed-upon ancillary IP.

In 2015, following the successful release of 2014’s Godzilla (which grossed $529 million worldwide), Legendary and Warner Bros. announced they would be distributing a shared franchise continuation that would include Kong: Skull Island ($567 million), Godzilla: King of the Monsters ($387 million) and Godzilla vs. Kong. The latter fulfills the publicly announced pact and Toho’s agreement with Legendary regarding Godzilla.

Toho has previously telegraphed its intentions to develop its own Godzilla films after the conclusion of the mini-universe, which would prevent Legendary from using the character. However, Hollywood is a fluid business. Few expected Marvel Studios and Sony to strike a deal that allows them to share Tom Holland’s Spider-Man and few expected the two sides to extend that deal after the initial contract was fulfilled. As long as there’s money to be made, anything is possible.

“Godzilla and Kong are the Batman and Superman of movie monsters.”

The MonsterVerse has given fans new Hollywood versions of Mothra, Rodan, and Ghidorah—creatures that may not be allowed to continue in the MonsterVerse without Toho’s involvement. Other Toho characters Legendary was not permitted to use this time around include Anguirus, Gigan, King Caesar, and Ebira. Without Toho’s involvement, Godzilla and his compatriots likely would not be legally permitted to appear in the MonsterVerse again. But will Toho walk away if three of the MosnterVerse’s four films surpass $500 million at the worldwide box office?

Legendary still owns King Kong and is working with Netflix on a Skull Island animated series. The production company can churn out more movies alongside WB with the giant ape at the center. Exploring the newfound Hollow Earth world introduced in the latest film with Kong leading the way is a reasonable expectation for the franchise. The MonsterVerse has also created new monsters such as Skull-Crawlers, Behemoth, Pterodactyl Monsters, Warbats, Crab Monsters, and Hell Hawks, so there are ample kaiju monsters to choose from for future adventures.

With two Jurassic World films preceding it, 2019’s Godzilla: King of the Monsters performed so poorly at the box office that Godzilla vs. Kong was delayed even prior to the pandemic. Now that fans are accustomed to both Apex Titans sharing the same universe, trading blows, and even teaming up together, can the MonsterVerse truly continue with just one central Monster?

“Godzilla and Kong are the Batman and Superman of movie monsters,” Dergarabedian said. “The brand and power of their IP is strong and there’s obvious appeal pitting them against one another. But some of the appeal moving forward is also tied to titling and marketing a story that delivers the big screen experience audiences want.”

Dergarabedian points out that Marvel Studios managed to transform historically B- and C-list characters such as Iron Man, Thor and the Guardians of the Galaxy into the most profitable blockbuster characters in the world. Despite the struggles of King of the Monsters, “the same thing can be done in the MonsterVerse” with secondary characters, he argues.

“2014’s Godzilla and Kong: Skull Island already did it to a point. It’s really about finding a strong voice and a point-of-view in a MonsterVerse that may or may not include Godzilla and King Kong in the same way.”

One crazy idea Legendary should consider if it indeed does lose Godzilla? Crossing the MonsterVerse over with its own Pacific Rim franchise originally launched by Guillermo del Toro.