Gunda, a black-and-white documentary about several farm animals including a mother sow, has the cuteness of a video made by The Dodo, but it’s occasionally as ferocious as National Geographic footage of a leopard mauling a gazelle. Stunningly photographed and conceived, the film is Viktor Kossakovsky’s follow-up to Aquarela, his 2018 doc on the overwhelming power of , which begins with a car traversing a frozen Siberian lake before plummeting through the ice and disappearing from view. Both films share the same haunting quality, but Gunda can only really be described this way in retrospect. The film is bookended by emotionally challenging moments, though for the 90 minutes in between, it paints a soulful portrait of several animal “characters,” with the camera mimicking their movements and perspectives at eye-level, and creating an alluring journey into the way they live their lives.

Executive produced by Joaquin Phoenix — the world’s most famous vegan as of the 2020 Oscars — the Norwegian/American production has much to say about the treatment of animals, though it disguises its political musings behind visual poetry. The film begins with the birth of a litter of piglets. It’s a beautiful moment framed obliquely: all we see is the anterior of Gunda, a mother pig, protruding from a tiny opening in a wooden shed, and as far as we know, her babies only pop into existence when they make their way out of this darkened doorway. From the moment they’re born, their lives are lived on human terms, a fact reinforced each time Gunda’s left ear flops over and reveals a plastic tag.

The human desire to force neat, comfortable narratives onto these animals clashes wildly with the physical limitations placed upon them.

These impositions on the bodies of animals crop up in a number of ways. The film also follows a flock of chickens, as they hesitantly explore the world beyond their crowded pen, and a thundering herd of cows running freely through a field in arresting slow motion. In both cases, the adventure stops suddenly at a chain-linked fence. However, since there’s only so much imagery that can be mined from physical borders, the film seems to embody the ideas of imposition and interference in an intriguing manner.

The aforementioned opening vignette at the pig pen lingers on the runt of Gunda’s litter as it makes its way out from under a pile of hay, gasping for air, for milk and for life. As it emerges, it’s lit by a narrow ray of sunlight entering the pen through a nearby wall. It’s a natural miracle, and it feels like the first chapter in a tale of “the little pig that could,” or some aspirational fable recalled from childhood memory. However, this narrative, too, is a human imposition. It’s a projection that ignores the lived reality of these animals, and a fantasy that’s dashed shortly thereafter when Gunda crushes the struggling piglet to death.

We’re mercifully spared footage of the entire incident. For those unfamiliar with pigs in captivity, it may come off as a shocking turn — something inexplicable, and irreconcilable with human impulse — but in reality, it’s a result of the conditions in which farm pigs are usually kept. The human desire to force neat, comfortable narratives onto these animals clashes wildly with the physical limitations placed upon them. There’s no payoff to their explorations, no closure to their deeds or actions — there are only the enclosures. Gunda is immersed within this tension between physical structures and intangible stories. The latter persist in the mind’s eye, even though the film features no dialogue, voiceover, text, or even music. In fact, its soundtrack is largely made up of natural ambience, like rustling leaves, chirping birds, and Gunda and her piglets’ grunts as they roam the farm.

However, human beings, stubborn and egotistical as we are, are bound to keep imposing this quest for a story on the images presented to us (the final stage of editing occurs, after all, in the subconscious). As the camera lingers on the pigs, the chickens and the cows — often in lengthy, static shots, wherein the only movement is the animals’ bodies — the question of meaning crops up time and time again, and its boundaries become increasingly blurry. The more the camera fixates on the animals’ eyes, the more “What is the filmmaker trying to say?” becomes inseparable from “What are these creatures trying to tell us?” Perhaps humans aren’t just attuned to searching for a story, but for a soul, and it’s that yearning for recognition — for familiarity — of which Gunda takes full advantage.

Kossakovsky and co-editor/co-writer Ainara Vera lay out several scenes of animals playing and lazing about, which unfold across several months and seasons, as we watch the piglets grow from helpless newborns to sprightly adolescents. The film is rather languid at times, but it never loses focus of its animal subjects. In fact, it features no human presence at all — that is to say, no actual human beings, though humanity’s specter looms large at all times, in Bambi-esque fashion. Rare are the moments where the frame features no human-made structures or clearings, but the animals are presented so wondrously and tenderly that anything remotely human begins to feel unnatural.

‘Gunda’ raises the question of what responsibility the filmmakers have here, if any. Should they have interfered when Gunda savaged her newborn child?

As the film goes on, Kossakovsky seems to question his own role in this “story.” The closer the camera gets to the animals, the more they begin to acknowledge it, and the more overt and immediate the invisible human presence becomes. Before long, the camera’s anatomical study of these animals starts to feel uneasy; the more the audience is reminded of human authors, the more this raises the question of what responsibility the filmmakers have here, if any. Should they have interfered when Gunda savaged her newborn child? Should they, perhaps, have put some money towards better conditions for these animals? In fact, the pig pen seen in the film is a re-creation with breakaway walls, meant to make filming interior shots more convenient. Is the film itself not in some way culpable, even though it functions as a mere observer? Or is the camera, too, at the mercy of industry, and only allowed to document someone else’s property?

These are all questions raised implicitly, and a given viewer’s mind is bound to wander to a number of different conclusions while absorbing the imagery. However, it is those images themselves that make Gunda stand out amongst documentaries of its ilk. Kossakovsky and co-cinematographer Egil Håskjold Larsen use their digital black-and-white palette to physically accentuate and spiritually heighten. The high contrast helps paint gorgeous halos of light around each animal — especially the little piglets — as if the film were begging the viewer, in Pantheistic fashion, to view even these simple creatures with reverence, as they play, and frolic, and attempt to taste the rain.

Whether or not this divine approach succeeds, what’s clear by the end of the film is that regardless of whether one pedestalizes or deifies life (animal, human or otherwise), the mere presence of consciousness is enough for many viewers to create a subconscious mirror. As Gunda lurches tiredly around the farm, and her adorable piglets follow with enthusiasm, there’s an amusing familiarity on display, thanks to the bodily energies projected by the animals.

Gunda may not technically be a silent film, but its expression through movement functions much the same way, with our minds filling in experiential gaps to create something that feels narratively whole. And by the time the film arrives at its final scene — one where these animals’ futures are implied, but not shown — the audience’s imagination is likely to be working in overdrive, to fill in the blanks of not just what might happen to them physically, but all that they may be feeling within.

Gunda is available on demand through Film Forum’s virtual cinema. 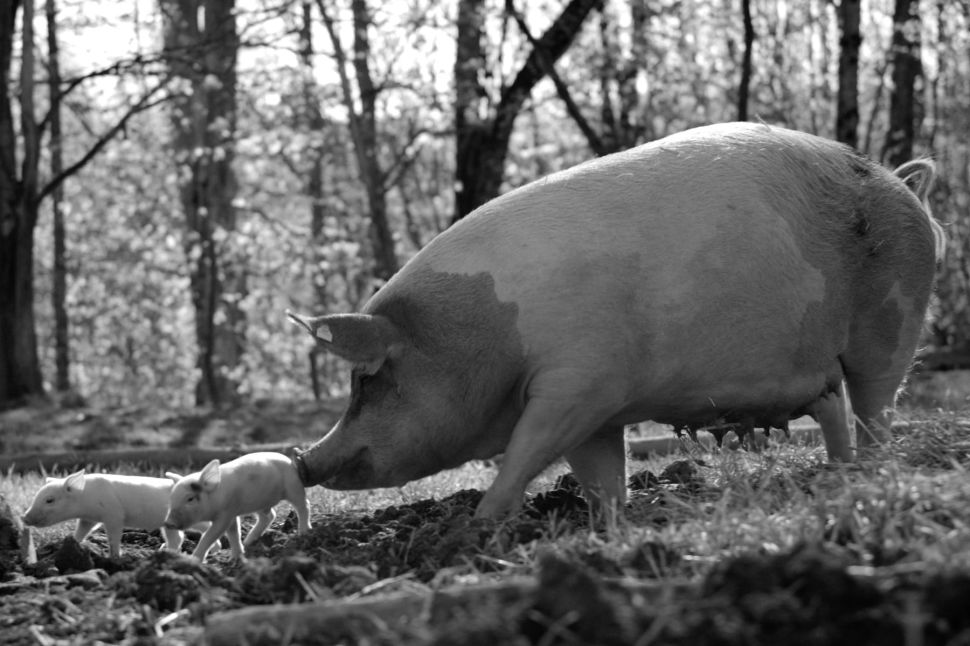