The New York-born, Afro-Dominican American writer Jasmin Hernandez, who founded the popular BIPOC-centered art website Gallery Gurls in 2012, remembers the 2010s as a moment of social transformation in the art world. The decade not only saw the meteoric rise of mid-career Black art superstars, like Mickalene Thomas, Kehinde Wiley, and Kerry James Marshall, but it also brought attention to a younger generation of BIPOC artists and art workers, whose practices challenged the art world’s exclusionary culture.

“At that point,” Hernandez, 40, recalls, speaking with Observer, “it was a responsibility to turn Gallery Gurls into a digital archive and document everyone as much as possible.” In 2014, while still working as a freelance photo editor, she began visiting the studios and homes of artists and art world influencers to conduct interviews. Her conversations would grow to make up the majority of Gallery Gurls’ content and become Hernandez’s “calling card” in art world circles.

Seven years later, and now a full-time arts journalist, Hernandez has entered the next phase in her archiving project with the publication of her first book, We Are Here: Visionaries of Color Transforming the Art World, a compilation of profiles of fifty BIPOC and QTBIPOC artists and art workers dedicated to fostering a culture of radical inclusivity within the industry.

Much like Gallery Gurls, Hernandez composed the Q&As that appear in We Are Here with celebration of identity and “timelessness” as her guiding principles. “I wanted to keep the questions super simple, super foundational, super universal…I definitely focused on joy and pleasure,” Hernandez says. “There’s pleasure and joy in answering what your favorite color is and who your favorite fictional character is.”  We Are Here, Hernandez makes clear, is not a heavy academic compendium, but a “simple inspiration book” for BIPOC and QTBIPOC creators of this generation and the next, “a for-us, by-us endeavor.”

As a child, Hernandez found her own creative inspiration in the art books that filled her family’s apartment in Jamaica, Queens in the 1980s. Her mother, a Dominican immigrant who had taught herself English by reading novels on her commute to work, encouraged Hernandez to develop her literacy skills at a young age. Despite their limited resources, literature was always “abundant” in their household. Hernandez devoured monographs on Goya, the Old Masters, and studied the works of painters from Titian to Rauschenberg. “The shelves on our walls were like my museums or my galleries,” she remembers.

By the time she experienced her first visit to a museum at seventeen––venturing up to the Met alone to see the 1997 Gianni Versace costume exhibit––Hernandez was already steeped in art history, eager to meet the Goya’s, Titian’s, and Rauschenberg’s she’d pored over and fall in love a dozen times over: “I just [remember] walking into this grand museum and paying a penny, or like a few cents for the suggested admission, and just being blown over and blown away.”  Even at the time, however, she recognized the lack of BIPOC representation in the collections: “It was always white male artists. Not even white women. It was just white male artists.”

As an adolescent, she spent hours alone in her room, buried in print magazines dedicated to hip hop and Black culture like Vibe and The Source, or fashion like Harper’s Bazaar and Vogue, where she followed the work of Azzedine Alaïa, Naomi Campbell and Tyra Banks.

In high school, Hernandez began to surround herself with “public school misfits” like herself. A part-time job at an Greenwich Village boutique introduced her to the QTBIPOC art and nightlife scene flourishing in Downtown Manhattan in the late ‘90s. “I met other Black and Brown queer kids, that also were art nerds and art dorks and fashion freaks,” says Hernandez. They hung out the Christopher Street piers and explored voguing balls and queer dance clubs. Her community grew as an undergraduate student at Parsons, and it would only continue to expand over the next two decades as Hernandez found herself spending more time online.

Born in 1980, Hernandez belongs to the first generation to grow up with Internet access. In college, she witnessed the late ‘90s dot com boom, which became a topic of interest within her business-oriented major. In the wake of the mania, she enrolled in a coding class and designed her first website as a group project, a celebrity fashion blog, called “TheScene.com” with a characteristically brash early-2000s aesthetic. During its short six-month lifespan, Hernandez produced the bulk of the site’s content, foreshadowing her future career in digital publishing. “I was planting the seed, and I didn’t know it,” Hernandez says.

The writer joined Myspace in 2007, and the platform quickly found its way into her professional life. As a freelancer at New York Magazine, she recalls using her Myspace account to communicate with an “anonymous [UK-based] nightlife collective,” only accessible through the platform for a magazine profile. “Even after the piece came out, we just kept a rapport,” says Hernandez. “When they came to New York, they threw a secret party and were asking me, ‘Can you help us with venues in New York?’ and I did.” Within the next few years, connecting with artists online would become second nature.

By 2011, Hernandez was already a seasoned blogger, social media user, and a decade-long veteran of art world events. Now, she was considering a career transition into art media. She signed up for continuing education courses such as Careers in the Art World at Sotheby’s that year, where she befriended Ann Samuels, at the time working at a law firm, ten years her senior, and the only other Black woman in her class. The pair bonded over their shared interest in the work Black contemporary artists and began frequenting gallery openings and art fairs. “We went full throttle, and we just dove into the art world together very intensely and deeply,” Hernandez recalls.

The pair launched Gallery Gurls in 2012 as a platform for their reviews, photos, and conversations centered on BIPOC artists. They would write about the art that moved them and focus on emerging BIPOC creators making waves.

Despite immersing herself in the New York art scene and writing prolifically, the art world jobs to which Hernandez applied often dismissed the value of her independent experience. Her age, 32 at the time, her lack of graduate degree, and her identity as a Black Latinx woman presented hurdles, the writer remembers. Gallery Gurls offered her a way to bypass industry “gatekeepers.”

When Samuels left the site in 2014, Hernandez took over, and invested herself in connecting with artists online, pursuing studio visits with rising stars like painters Hiba Schahbaz and Jordan Casteel through DMs. Instagram became a tool of research and discovery. It provided a way to not only build personal relationships, but also to identify key players in the field, tune into ongoing conversations, and observe a generation of disruptors coming to the fore.

Many of the individuals interviewed in We Are Here echo Hernandez’s sentiments about the importance of social media in their creative lives. Several BIPOC and QTBIPOC creators contend, in particular, that platforms like Instagram allow them to better communicate their identities and practices to a broader audience.

Firelei Báez, a Dominican-born, New York based painter tells Hernandez in We Are Here “I appreciate the generosity of the medium, whether constructed or not, in sharing process and inspiration, not just the big heroic moments.” The Los Angeles-based multimedia artist Shyama Golden adds, “I’m no longer solely at the mercy of a panel of judges who might not get what I’m about.”

With punchy prose and lush photography by Sunny Leerasanthanah and Jasmine Durhal on every page, We Are Here exists happily in the age of social media, while offering a portrait of the generation of BIPOC creators that used it first to assert their presence in art and the world at large.  Nevertheless, Hernandez’s text still carries with it the precious things that the Internet lacks: the authority and durability of a book and the promise of canonization for its fifty subjects.

Upon finally seeing We Are Here in print after two years, Hernandez shares, “I just knew that this book will still be looked at in 2027 and 2029.”

With We Are Here now on bookstore shelves, the writer already has her eyes on potential second and third volumes. “There are no Gen Z subjects in the book, and I want to get to them in volume two or three,” says Hernandez. “This is unstoppable…They need to get documented as well.” 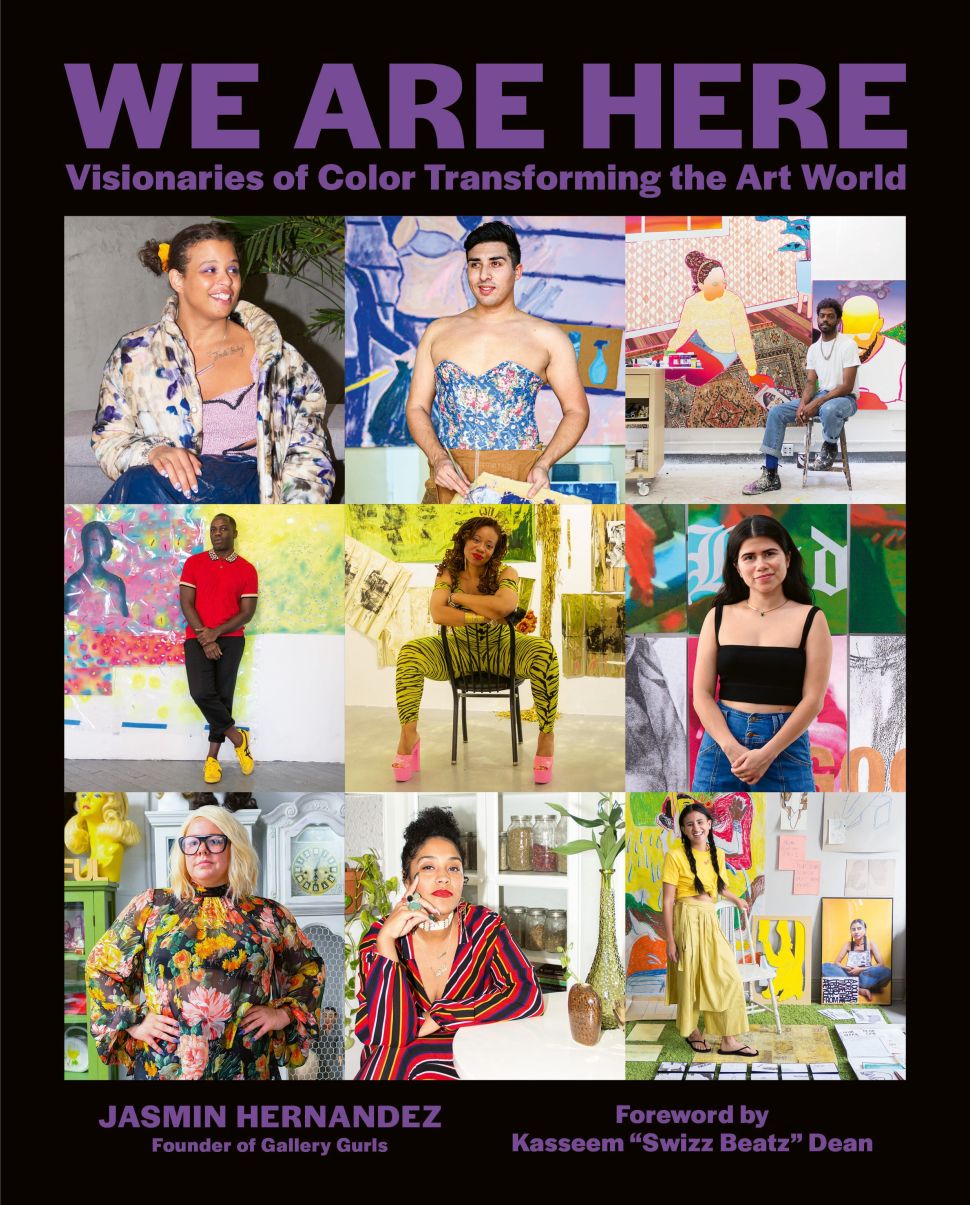