Nestled under the Belvedere Castle in Central Park, the moon rises over the stage and trees whisper in the summer air: it’s a night out at the Delacorte Theater. The closest stage New York has to a Greek amphitheater of yore, people from every borough and from every walk of life come together to encounter experimental musicals or newly interpreted Shakespeare. Artistic masterpieces ranging from The Taming of the Shrew starring Meryl Streep in 1981 to The Merchant of Venice starring Al Pacino in 2010 have left a mark on the Delacorte’s stage.

The performance community was one of the hardest hit in the pandemic, which caused theaters to close and forced thousands in the industry out of work. After a year of devastating loss paired with moments of pause that led to creative renaissance, playwright Jocelyn Bioh and director Saheem Ali are ushering in the revival of The Public Theater with modern adaptations of Shakespeare classics. Finally, the curtains are rising again for New York theater.

Since 1954 The Public Theater has cultivated New York City’s performing arts. Founder Joseph Papp’s goal was simple: create a forum to showcase up and coming playwrights and performers. The Public has five theater spaces at 425 Lafayette Street, including Joe’s Pub, a cabaret-style venue used for new and developmental productions. Its most famous theater is The Delacorte, home to the beloved Shakespeare in the Park.

Bioh, a playwright and performer born and raised in New York City, is writing an adaptation of the Shakespeare comedy Merry Wives of Windsor, which she shortened to Merry Wives. Ali, resident director of The Public Theater and director of Merry Wives, just completed his third audio play since the beginning of the pandemic: Romeo y Julieta, starring Lupita Nyong’o and Juan Castano.

“He’s like my creative soulmate,” Bioh said of Ali. The pair work together frequently on projects ranging from live performances to film. Late last year, Ali came to Bioh with an idea: what if they made Merry Wives about immigrant communities from South Harlem, and reimagined the story through an entirely new lens?

So there you have it: Merry Wives is set in Washington Heights, the same neighborhood Bioh grew up in, and the cast will speak in Ghanaian and Nigerian dialects, pulling from the richness of culture from the neighborhood’s African immigrants.

Both Bioh and Ali are passionate about putting stories from the African Diaspora at center stage. The creative pair come from African families: Bioh from the West, and Ali from the East. Her adaptation draws from her personal experience growing up in a Ghanaian neighborhood and focuses on what she tries to capture in all of her life’s work: a celebration of Blackness. Bioh’s play School Girls, or fondly known as “The African Mean Girls Play” was featured in the MCC PlayLab Series in 2017. Her other plays include Nollywood Dreams (Kilroy’s List 2015), African Americans (produced at Howard University in 2015 and a Southern Rep Ruby Prize Award Finalist in 2011), and Happiness And Joe. As an actress she’s been in the Broadway production of The Curious Incident Of The Dog In The Night-Time, Signature Theater’s In The Blood and Everybody, and An Octoroon, which was an Obie Award Winner for Best Play in 2014.

They have both seen how narratives about the African continent are too often written as tragedies, regularly highlighting the poverty and devastation rather than the joy, music, food, and light of those cultures.

Bioh studied theater and performing arts at Ohio State University for her undergraduate degree, but she wasn’t necessarily met with open arms. At that time the school was mostly casting to type, meaning her acting roles were limited to roles specifically written for Black people. Out of the discouragement of not being cast, Bioh took up writing. If no one was writing stories for and about Black people, she would write those roles for herself.

“I took a playwriting course to compensate for credits that I wasn’t getting because I wasn’t getting cast,” said Bioh, “and then found that I really liked it.” One of her professors encouraged her to keep writing, and she ended up getting her MFA at Columbia University for playwriting.

“Seeing a Shakespearean play with African people,” Bioh said about Merry Wives, “with Black actors using African dialects with Shakespearean text, that alone is just going to be really fun and make for a really unique experience.”

Shakespeare’s Merry Wives of Windsor follows Sir John Falstaff as he tries to woo two women at the same time: Mistress Alice Ford and Mistress Margaret Page. He sends them almost identical letters describing his affections, but the two women are uninterested in the older, less-than-desirable-looking Falstaff. Instead of confronting him with his identical letters, they get their revenge by responding to his advances. A classic Shakespeare comedy ensues, filled with deceit, jokes, and amusing raunch.

“I do feel like I always have very strong, centered women characters in my plays,” said Bioh of the main characters. “And I love that the play still has women outsmarting a man in some ways, it feels very central to what I talk a lot about in my plays.”

“In college I was kind of actually discouraged from doing any sort of Shakespeare or classical work. I never had those opportunities,” said Bioh. “So really, this is my first Shakespeare play ever that I’m working on in any professional capacity. So it is really exciting for me.”

Performers and directors were forced to think outside of the box this year to create new and innovative ways for audiences to interact with theater. Performances were held over Zoom, Instagram Live, YouTube, and in outdoor parks all across New York and the world. Director Saheem Ali and playwright Ricardo Pérez González’s Romeo Y Julieta reimagines the Shakespearean classic by merging the sounds of a city. This audio play starring Juan Castano as Romeo and Lupita Nyong’o as Julieta transports the listener to wherever their mind takes them. Because of the lack of a visual set, the audio allows a freedom for the audience to imagine their own setting.

Ali and playwright Ricardo Perez Gonzalez started the adaptation process by putting the texts from the Shakespearean English and Spanish translation side by side. They created a blueprint to figure out who would speak Spanish and when, and the end result was a play that embraced a bilingual rendition, with over 50% of the text in Spanish.

Academy award winning actress Nyong’o was born in Mexico and raised in Kenya, and Castano was born in Columbia. Ali wanted the two stars to have a different relationship to Spanish to be able to bring that relationship with them instead of forcing a specific dialect.

“I wanted the actors to keep that form of their identity and create a sonic landscape that could be anywhere,” said Ali to Observer. “Someone listening to it from Caracas could hear and see Caracas, someone from Havana could see and hear Havana.”

Similarly to Bioh, Ali is focused on creating a platform to tell underrepresented stories. After a year of racial reckoning, he recognizes the real demand within the New York acting community to continue to create substantial change.

“Like most theaters, coming out on the other side of this is a real desire to respond to the cultural moment, to continue to do work that is anti-racist,” said Ali. “You know, for me, I’m just, I just feel so privileged to be working at The Public now, because it’s been an institution that I have had such deep, deep love and respect and admiration for.”

“It’s not lost on me that the first big theater experience is going to be a play with all Black people on stage,” said Bioh of Merry Wives. “And I feel like, in some way, the best way and the most beautiful way, we’re going to acknowledge what we’ve all been through — acknowledge all the lessons we’ve learned this year. And really hope to be better and more empathetic people moving forward.”

People all over the country are going to be looking for growth and change that’s reflected relative to where we were before. And that’s going to mean different things for different theaters. The Public, however, has always been known for its long track record of amplifying diverse voices. “I think that we’re going to come out on the other side of this and just be even better than we were before,” said Ali.

Romeo y Julieta is Ali’s third audio play since the beginning of the pandemic, the first two being Shakespeare’s Richard II and Anne Washburn’s Shipwreck. Romeo Y Julieta is available to listen on Apple or Spotify podcast apps, or online at publictheater.org. Merry Wives will premier at the Delacorte Theater in July.

(COVID preparations/distancing info at the Delacorte Theater to come) 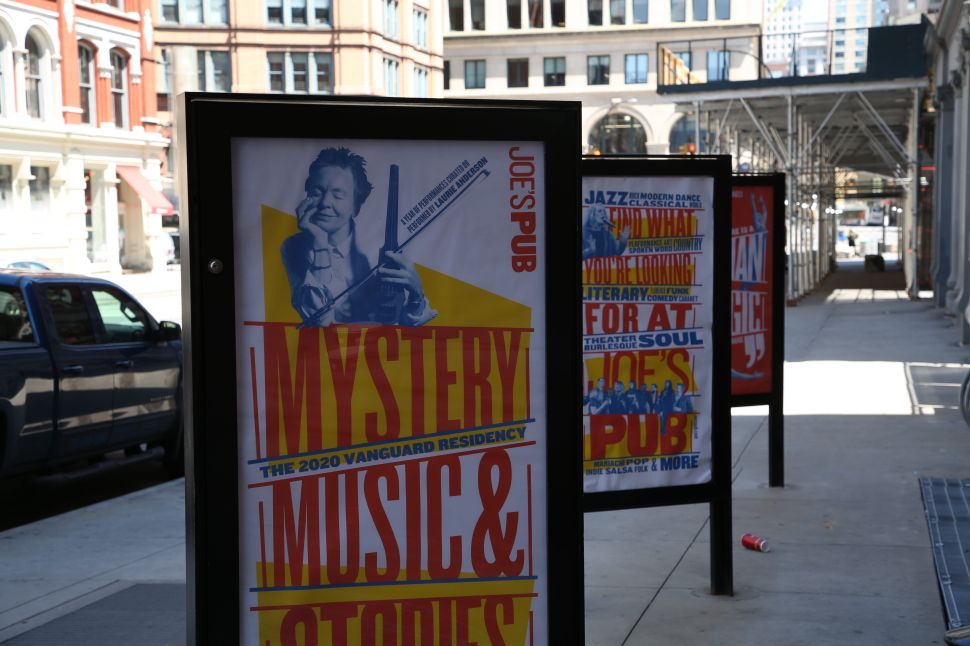