Never before in the history of cinema has a second take on a box office flop generated more intense conversation and scrutiny than Zack Snyder’s Justice League, which arrived on HBO Max March 18. From the inevitable comparisons to the 2017 film, to the greatest beneficiaries and the biggest losers of this redux, the film has been at the very center of film culture this month. But is the Snyder Cut of Justice League an actual hit? That’s what we’re here to find out.

In lieu of official information on the film’s performance from HBO Max, we’ve collected all the third-party analytics data we could to better understand the new Justice League‘s success or failure. But remember, each dataset has its own unique pros and cons as a viewership and demand indicator. Without any first-hand revelations from WarnerMedia, our goal is collect information from several sources to see if a consistent, illuminating trend emerges.

UPDATE 4/6: Variety has published data insights from TVision, which measures around 25,000 titles across the U.S. amongst a panel of roughly 5,000 households and 14,000 individuals to extrapolate viewership data. According to their research, Zack Snyder’s Justice League drew a smaller streaming share—defined as the weekly percent share of time spent with streaming services among U.S. TVision panel members—than Wonder Woman 1984, Judas and the Black Messiah, and Godzilla vs. Kong.

ANTENNA observes transaction data on several million U.S. consumers (on a strictly anonymous, opt-in basis). Using this data, it can tell when people signed-up, when they cancelled, when they switched services, and so on. It’s not a picture of ratings viewership, but it does provide clarity into how successful a piece of content is in attracting new customers to an SVOD service. In lieu of traditional box office grosses, new subscription growth is a favorable substitute for the streaming era.

For greater context, HBO Max has been growing incrementally, but not fast enough to appease Wall Street. The service had 17.2 million total activations overall as of Jan. 27.

The most important element to focus on in the streaming wars is churn. How many of these new customers will remain subscribed to HBO Max after one month without cancelling their subscriptions? The downside to the importance of churn is that we’ll have to wait a few more weeks to explore that facet, but there’s reason to believe high-profile new DC Comics content provides a decent retention rate. Per ANTENNA, Wonder Woman 1984 boasted a solid holdover rate following its successful release. On top of that, HBO Max’s overall retention rate in the latter half of 2020 was quite impressive.

Retention update on the biggest films of 2020 – WW84 & Soul cohorts were respectively 7 and 5pts more likely to cancel within 2 months of Subscribing vs. Benchmark, whereas the Hamilton cohort was 16pts more likely pic.twitter.com/naSqeAg4d2

WarnerMedia is sacrificing an estimated $1.2 billion in revenue by moving its 2021 theatrical film slate to a day-and-date release on HBO Max, per Variety. According to Stratechery, HBO Max generates a monthly average revenue per user (ARPU) of $12, which equates to $144 in annual ARPU. So to cover the estimated $1.2 billion in lost theatrical film revenue in 2021, HBO Max would likely need to add around 8.3 million new subscribers. The upside benefit of a subscription-based model, however, is the potential for recurring revenue, which is one reason why Wall Street gives tech-based streaming services so much more leeway than traditional media stocks.

WarnerMedia originally projected between 75 million to 90 million subscribers by 2025. Earlier this month, the company increased its projection to 120 million to 150 million, suggesting internal confidence in the product.

App analytics company Apptopia estimates mobile-app performance metrics, which include downloads, in-app purchase revenue, and daily active users. They do not, however, estimate viewership and their numbers only extend to mobile devices and do not include consoles, TVs and Smart TVs. It’s also important to note that downloads do not automatically equate to new subscriptions or a view and the bulk of users are likely not watching full films on their phones. Instead, Apptopia can help provide a small measure of HBO Max’s potential app growth.

According to Apptopia data, HBO Max saw 1.48 million mobile app downloads for the week ending on March 28. This marks a 64% increase from the week before Zack Snyder’s Justice League arrived on the platform. For comparison, Disney+ accrued 831,000 new app downloads for the week of The Falcon and the Winter Soldier‘s second episode, per Apptopia. Overall, the streaming platform saw a 8.9% increase in users launching its mobile app, according to Bloomberg.

The app analytics company also determined that HBO Max enjoyed the second-largest engagement in mobile-app streaming for the week ending on March 28. Specifically, the HBO Max app was opened 119.1 million times in that frame, per Apptopia, second only to Netflix’s 838.8 million. Disney+ drew 69.7 million app opens during the same span. Again, however, app downloads do not automatically equate to subscription activations.

Reelgood is a streaming guide that tracks every TV show and movie available online. The service boasts upwards of 2 million U.S. users. As a search engine function, audiences primarily use it to find where shows and movies are streaming, which can occasionally favor titles with less availability or audience awareness.

For its comparison, Reelgood included all “superhero” movies and TV shows that premiered on any SVOD platform between Oct. 2020 and Mar. 2021. The data shows these were the top four in terms of streaming and engagement share among Reelgood’s U.S. users:

Specifically, the opening weekend shares of streaming and engagement for the above titles broke down as follows:

For added perspective, Season 2 of Amazon Prime Video’s The Boys drew a 7.2% share of streams in its opening weekend (Sep. 4-6, 2020), ranking as the No. 1 TV show on Reelgood in that timeframe. Stranger Things 3 (July 5-7, 2019) drew a 5.8% streaming share. One thing to note, though, is that Reelgood computed each “superhero” title’s streaming and engagement share using a slightly different metric than The Boys and Stranger Things to enable the company to make direct comparisons between movies (ZSJL, Wonder Woman 1984) and TV show premiere episodes (WandaVision, The Falcon and The Winter Soldier, etc.).

However, it’s worth noting that both Prime Video and Netflix house significantly more U.S. subscribers than HBO Max, which can inflate streaming share metrics when comparing different services. Naturally, the service with more subs will generate a higher streaming percentage share when releasing new popular content.

Given the close proximity of Zack Snyder’s Justice League (March 18) and The Falcon and The Winter Soldier (March 19), Reelgood also put together a map showing which of the two titles was streamed by more users via its app in every state.

Whip Media’s TV Time is similar to Reelgood in that it helps to track availability and scheduling for small screen content as a discovery tool. As such, it can also occasionally favor more obscure titles users are tracking.

When measuring, TV Time—which has north of one million daily users—found that Zack Snyder’s Justice League was the most-watched movie in the U.S (7.6% viewshare among ALL movie titles both new release and library) during its release weekend (March 18-21, 2021). TV Time defines a viewer as an app user who has tracked a title as watched.

Though it’s far from an apples-to-apples comparison, Netflix recently announced that Jennifer Garner’s Yes Day!, which ranks second behind the Snyder Cut in the above chart, is on pace for 53 million views within its first month of availability. Again, this is not a direct comparison due to the disparity in subscribers between the two services, but it’s clear that Yes Day! enjoyed a successful opening weekend by Netflix’s internal standards.

Amazon claimed that Coming 2 America, which ranks third in the above chart, was the #1 streamed movie of its opening weekend (March 5-7), with the #1 opening weekend of any other streaming movie in 2021 to that point, and the #1 opening weekend of any streaming movie in the past 12 months as of its release, per 3rd party marketing consultant Screen Engine/ASI’s weekly PostVODTM ranking. Screen Engine, however, isn’t allowed to disclose viewership numbers for the movies it surveys, making the claim impossible to verify without greater transparency.

When compared to other HBO Max movies, audience demand for the Snyder Cut was 35% higher than Wonder Woman 1984 at 3 days post-release, per TV Time. The film is also garnering more interest than Godzilla vs. Kong (March 31) or Mortal Kombat (April 16), in terms of the volume of followers tracking each project on the TV Time app.

Samba TV gathers viewership data via its proprietary Automatic Content Recognition technology on opted-in smart TVs. They analyze the proprietary dataset to project household-level TV viewership. It’s worth noting, though, that this is extrapolated from a select group of opt-in smart TV users and does not account for non-TV devices, leaving out a big piece of the puzzle. HBO Max reached 3.1 million app downloads in its first month alone, per Apptopia.

According to Samba TV data, 1.8 million U.S. households watched at least five minutes of Zack Snyder’s Justice League on HBO Max over the weekend. (For perspective, Netflix uses two minutes as its minimum viewership metric). Here’s how that compares to the “opening weekends” of other major recent SVOD releases, per Samba’s numbers:

When Samba TV went back to calculate the completion rate for the four-hour film, they found only 1/3 of households (600,000) watched the movie in its entirety from March 19-21. The film is split into six chapters so many viewers have been watching it in segments over several days.

Google Trends is not a substitute for viewership ratings in any form. Instead, though, it does offer a glimpse at internet search traffic, which can reflect the interest and demand for a given title. Here’s how the term “Justice League” (which far out-performed other variations including “Snyder Cut” and “Zack Snyder’s Justice League”) compared to other major recent movie releases.

Here, we can see that the peak of Justice League search traffic was comparable to Amazon Prime Video’s Coming 2 America, greater than Disney+’s Raya and the Last Dragon, but smaller than Pixar’s Soul and fellow Max blockbuster Wonder Woman 1984.

Now, here’s how the new four-hour Justice League, which was originally going to be released in weekly episodic chunks as a miniseries, compares to other major recent SVOD television releases.

While Justice League boasts the highest high, it doesn’t yet have the sustained engagement tail as a WandaVision or Bridgerton. The decay in viewership for streaming movies is a very real phenomenon which also applies to the social conversation surrounding it. Whether or not the film’s long running time negates that reality remains to be seen long-term. But search traffic surrounding the film has already dropped precipitously from its peak.

This article has been updated with additional Reelgood data context and new data from TVisions. 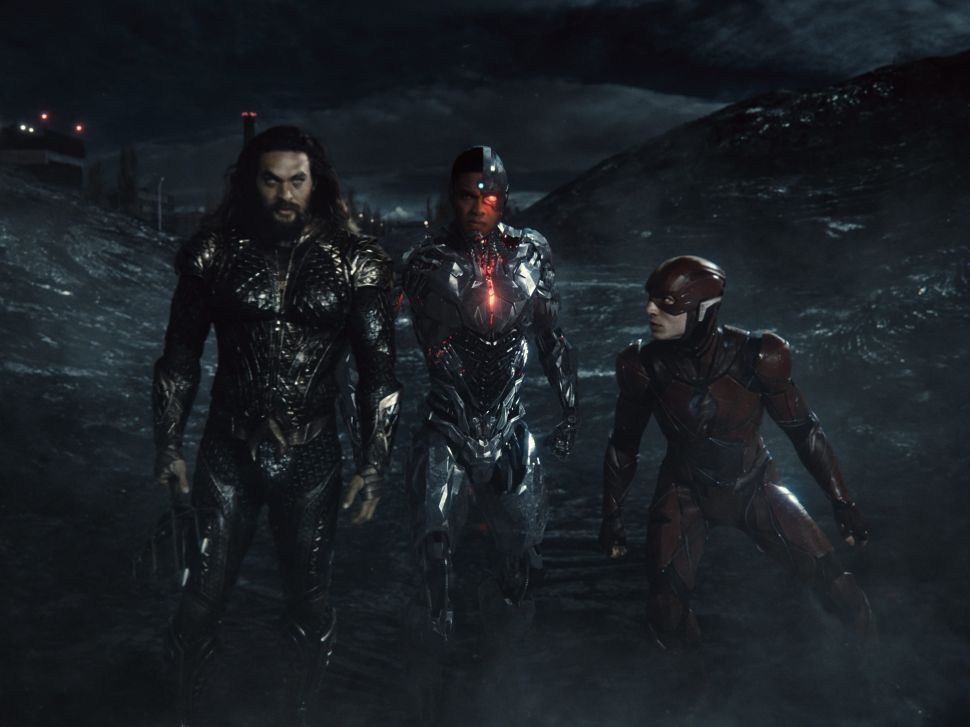