When I stood in front of one of Mariette Pathy Allen’s portraits, I realized I was holding my hands the same way as Vanessa in a Fur Jacket. I noticed the work many of Allen’s subjects had done in an attempt to pass. The carefully painted nails, thin bracelets, bold make-up, leather pants, dangly earrings, and hair done just like Princess Diana.

“Transformations: Crossdressers and Those Who Love Them,” a revisiting of Allen’s photographs from 1989, is currently on view at ClampArt through April 10th. The portraits originally formed a portfolio to coincide with the publication of Allen’s book of the same name. Allen has a long history of photographing transgender people, from Burma to Thailand to Cuba.

In many of Allen’s photos on view at ClampArt her subjects display a sweet glamor and tenderness. Her subjects are familial, whether they are posing with their children, wives, or spouses. Placing and photographing crossdressers and trans people with their families is rare, in life and art alike. Unlike some photographers, Allen’s work attempts to give dignity and power to her subjects. In an interview with Float Magazine, Allen noted how she worked with her subjects: “I would try to help them figure out what kind of woman they wanted to be, and encourage them to act as that person.” With Queer Art, Aaryn Lang, and Serena Jara, Allen helped develop the Illuminations Grant for Black Trans Women Visual Artists.

I admit I’m always skeptical of the power dynamics of outsiders portraying communities. What is a photographer’s investment in trans portraiture? The messy historical complications of turning the lens on trans people has been heatedly debated in recent years, one of the most visible cases being Andy Warhol and Candy Darling’s explosive and exploitative relationship. When asked about her relationship to the trans community Allen recounts her origin story of meeting a group of crossdressers at a hotel breakfast. “I felt I wasn’t looking into the eyes of a man or a woman, but as if I were looking into a soul,” Allen said in Sixteen Journal.

The politics of looking have been debated endlessly, partially because we love to look in spite of ourselves. On the one hand there is Nan Goldin with her insertion of self, discussing her own life through self-portraiture and pictures of her own queer and trans friends. Something Hilton Als has called her “I.”  On the other hand there is what Susan Sontag calls “the opaque dignity of victims” in her book of essays On Photography. Sontag is praising the work of Diane Arbus, who is often positioned against Nan Goldin. In fact, Arbus is often called a photographer of “assorted monsters” or “freaks” by Sontag. Arbus, Sontag argues, does not try to create humanity, instead she breaks it down. Goldin, on the other hand, is often written about as a hero, even if at times she comes across as someone without a grip on modern gender discourse.

Mariette Pathy Allen is aware of this discourse, in interviews noting how trans and gender variant people were portrayed as “freaks.” For Observer, I asked Allen what precipitated showing this work now “Brian Clamp chose to offer the show to me at this time. I’m glad he did, for my own sake, but also because the gender variant /non-binary world in the US tends to forget a lot of its history, and re-argues all the points that were discussed in the past. The issues regarding the acceptance of crossdressers within the LGBTQI and Feminist communities is once again under discussion.”

An understatement if there ever was one.

It brings to mind discussions of crossdressing and trans respectability politics in the written work of Andrea Long Chu and Torrey Peters, as well as the mobility of certain sections of the LGBT community and the punishment of others based on race, class, and gender identity. What is at stake when arguing for dignity? Who gets dignity and who gets hormone replacement therapy? The hope of portraiture is to become eternal, a lasting image full of glory. Whether this glory is full of dignity or cracks in the armor depends on factors often out of the subjects’ control. This mix of agency and rights is a large part of what is at stake in working or documenting trans people. The scales are not balanced.

Allen’s photos are beautiful in scale, their use of dappled light captures the luxurious texture of fur coats. Allen’s photos were displayed alongside Kenneth Gruenholtz’s “Behind-the-Scenes”, a series of homoerotic black and white photographs. This upheaval of gender next to displays of gay masculinity is intriguing. Allen’s glamor shots bring dignity to home portraits–the location where so many crossdressers and transgender people experience untold amounts of shame. The photographs seem to hold untold stories, stories where love exists. Sometimes this comes across, in the kitschiness of Princess Diana and the sheer beauty of the portrait Sherry. Sometimes the photographs lapse through into something else, an unhealed wound is exposed.

Vanessa in a Fur Coat is in this second heartbreaking category. While the subject seems ready for the shutter, her hands betray her fragility against the stone wall backdrop, the twilight-streaked grays highlight Vanessa’s black blouse and gaunt figure. She seems both bored and as if waiting for something. As if the bracelets just clanked down her wrists and she heard someone coming down the street. Her red nails perfectly manicured. I grabbed a program, a striking woman in red looking back at me, and went for the door, checking my chipped nails as the afternoon sky hit. 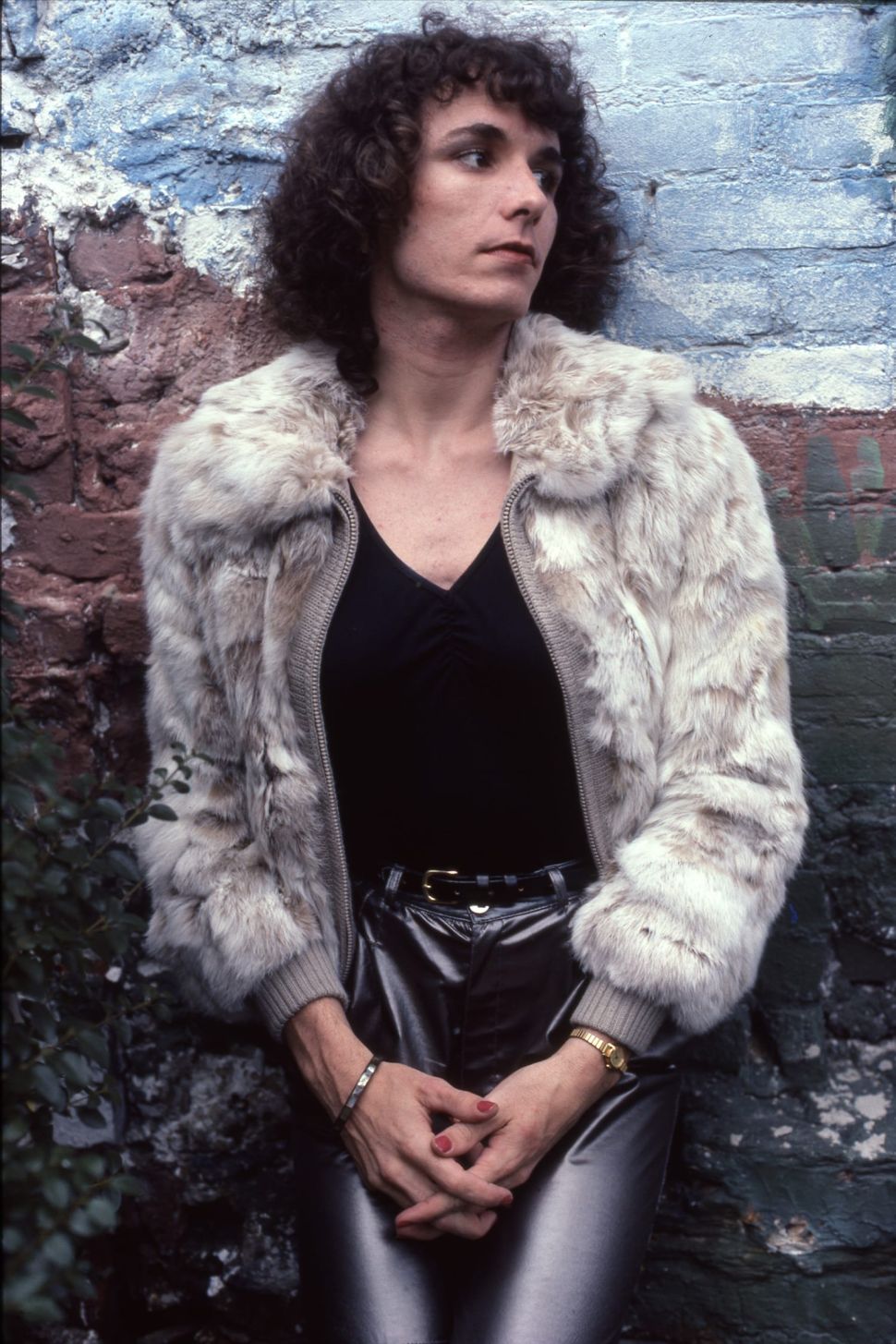