There’s something both incredibly alarming and mesmerizing about reading a fictional character’s word-for-word description of your own eating disorder. When Rachel, the anorexic main character of Melissa Broder’s second novel, Milk Fed, mixes zero-calorie sweetener into her Greek yogurt for breakfast, I muttered out loud to an empty room, “Oh, I do that.”

It’s like passing the same make and model of the car you’re driving and giving the driver a little wave. Later, you pull up at the gas pump next to them. “Hey, does your muffler make a rattling noise too?” “Yes!” You become instant comrades, bonded by shared experience.

It’s difficult to extract my instinctive attraction to Milk Fed from an evolutionary impulse to seek out what is similar to me. This theory of fiction, that we read stories to see ourselves reflected back, is an affirming but closed feedback loop. Milk Fed becomes far more interesting when a disruption is introduced in the form of Miriam, an Orthodox Jewish woman working at Rachel’s favorite frozen yogurt shop.

As fascinated as I am by Rachel’s eating disorder, she is equally fascinated by Miriam’s lack of one. Miriam eats food with a connoisseurship. When Rachel and Miriam go out to dinner together for the first time, Rachel is entranced by Miriam’s confidence and enthusiasm in eating food: “…she cut carefully into a piece of chicken with the side of her chopstick, elegantly and with slow precision, as though nothing had to be inhaled urgently…. She surveyed her plate, strategizing, map-making.”

Milk Fed is full of people watching other people eat, replicating the surveillance state that we create for ourselves and for others, as people with bodies and complex standards for what those bodies must look like. Everywhere Rachel goes, she is being watched: in childhood, by her mother who chastises Rachel for her food choices; by her female coworker, Ana, who comments on other coworkers’ bodies; by Miriam’s mother, who admires Rachel’s slimness when she visits for dinner; by Miriam’s suspicious sister Ayala.

As keenly as Rachel feels strangers and acquaintances’ observation, she returns it in equal measure: “I watched Ayala eat. Miriam and her mother, father, and brothers each took second helpings of every dish, eating with fervor, but Ayala picked at her food. This made me self-conscious, as though I should be doing the same.” The watchfulness could be interpreted as care and attention, and Rachel is desperate for both of those things, if it didn’t have such a narrow margin of success.

The hyper awareness of being perceived is familiar territory for Broder, whose popular Twitter account has given her years of practice in masking careful reputation management with a facade of confession-style honesty. Reading Milk Fed becomes a game of discerning when Broder’s writing slips into autofiction — there are details that are pulled directly from Broder’s book of personal essays, So Sad Today.

Her writing seems most unguarded when she’s writing about Rachel’s earnest desire to connect with her Jewish faith. The agony of being held at a distance from her heritage by her fear of eating feels like a conflict that Broder is processing in real time. But she takes the reins of control back up when writing Rachel’s sexual fantasies, which often overlap desire with food. Broder writes eroticism with a gleeful awareness of its own shock value. She is watching us watch her, and enjoying it.

At the same time I was reading Milk Fed, the TikTok algorithm was putting dozens of eating disorder recovery videos on my For You Page. Here were all these young people, mostly women, who looked like me and ate like me. The format of the videos usually followed the same formula: the TikToker would post videos of what they had eaten in a day of recovery, as a system of accountability to themselves. But I couldn’t watch them without internalizing a mandate to replicate them, to trawl grocery store aisles for the same foods.

That same process, observation spilling over into consumption, drives Milk Fed. In one of her therapy appointments, Rachel’s therapist gives her a lump of clay and tells her to sculpt an image of herself. Rachel reluctantly forms the clay into “an immense psychedelic woman.” For the rest of the novel, we’re left to decipher if the clay figure is actually Miriam, Rachel’s desire manifested in clay, or Rachel herself, in a reflection of her desire: “It was a shape that always lived inside of me. It was destined to come out.” Choose your sexual disorder: voyeurism, with Rachel lustily watching Miriam eat; or narcissism, with Rachel aroused by her own appetite.

Curiously, Rachel never reveals her eating disorder to Miriam, choosing instead to privately navigate her fear and desire. Voyeurism, by definition, dictates that the person being viewed does not realize they are being viewed. By not divulging the intense anxiety and eroticism Rachel associates with food, she avoids confronting how she uses Miriam as a canvas for her desires: sexual, liberatory, or otherwise. When her gaze becomes visible even to Miriam’s conservative family, Miriam cuts things off. She’s more beholden to the forces of respectability asserted by her faith and family than the forces of Rachel’s lust and hunger.

Which is devastating to Rachel, but not necessarily something to mourn. Like I had watched the eating disorder recovery TikToks and replicated their modes of recovery, Rachel witnesses Miriam’s joy, studies it, fears it, loves it, and ultimately, co-opts it: “I had thought that I was the sculptor and she was the golem. But now I considered that she might be the sculptor, the maestro, the creatrix, expanding and improving me, giving life to my dead parts, laughter to my breath. Maybe she was remaking me in her image. Maybe we were remaking each other.”

Which is a generous interpretation of a distinctly one-sided relationship. Because of the first-person narrative, we’ll never know if Miriam felt used by Rachel. Certainly the eating disorder recovery TikTokers have more autonomy than Miriam — they filmed and uploaded the videos, asking to be seen. But do Miriam and the TikTokers feel better, having been witnessed? Does Broder feel freed, having outsourced her recovery to a fictional character?

And do I feel better, having watched and read these things? I don’t know if witnessing strangers’ consumption habits is as cathartic as I want it to be. As thrilling as it is to see myself reflected back in those videos and in this book, the jolt of recognition has the same shelf life as catching my reflection in a mirror on the street. If the book’s conclusion is to be taken as a cautionary tale of mistaking voyeurism for self-discovery, Broder seems to be telling us that our salvation won’t come in the form of someone or something else. The myth of Narcissus warns of how intoxicating our own image can be. Milk Fed warns of how arresting it is when reflected in another person. 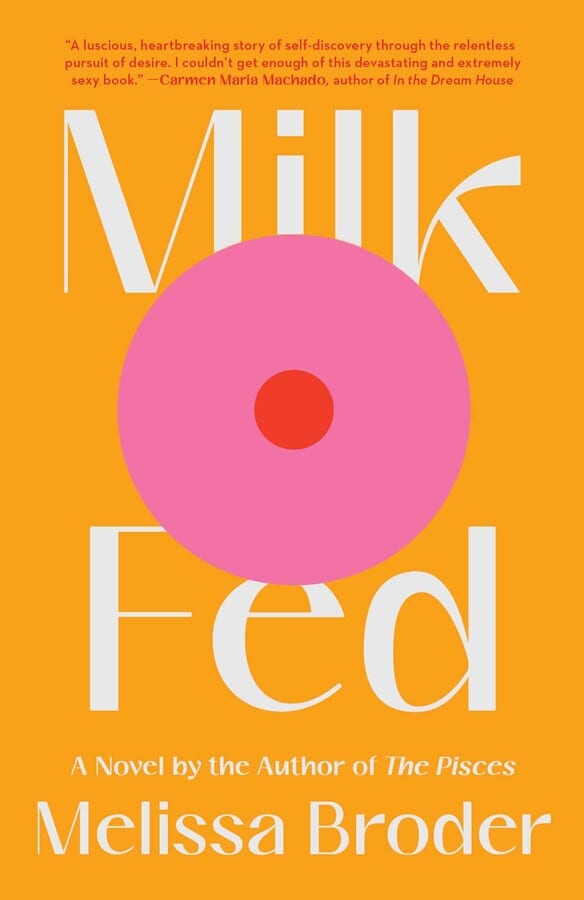