Wouldst thou like to live deliciously? Look no further than the music video for Lil Nas X’s new single, “Montero (Call Me By Your Name),” a provocative celebration of queer fantasy and love. Dripping in glitter and rife with biblical imagery, the video invites viewers to witness the rapper’s journey from the Garden of Eden, to Heaven, and, finally, to hell as he sings about sex. In true camp fashion, Lil Nas X stars in all the roles: Adam, the serpent, a demon, and Satan himself. Unsurprisingly, people are mad. The video has sparked a new satanic panic, with conservative commentators clutching their pearls and attacking the rapper on Twitter.

But Lil Nas X can certainly hold his own. On Instagram, he wrote a love letter to his younger self, dedicating “Montero” to the closeted fourteen-year-old he used to be. In it, he admits that while he’s still afraid of people’s anger in reaction to his art, he’s also pushing an agenda: one to open doors for other LGBTQ people and normalize embracing queer identity, rather than just tolerating it. As Lil Nas X suggests in his post, he is that type of gay person—flamboyant, loud, and proud. By stamping his given name, Montero, on his latest banger, he’s challenging listeners to deal with it.

Lil Nas X’s critics attempt to cloak their homophobia and racism in concern for young consumers of the rapper’s music. But representations of the devil have long existed in children’s media. Disney’s 1929 animated short film “Hell’s Bells” depicts a party in hell where a lesser demon eventually overthrows Satan.

Sound familiar? “The devil as a gay person” trope is also nothing new, particularly in cartoons. And, more specifically, neither is “the devil as a red, gay man.” In 1990s Cartoon Network series The Powerpuff Girls, Cow and Chicken, and I Am Weasel, the main characters’ main foes are effeminate, red demons HIM (His Infernal Majesty) and Red Guy. These villains are iconic, unhinged, and queer-coded. Intentionally or not, Lil Nas X draws on this history in “Montero,” reclaiming the motif and continuing a long tradition of queer blasphemy.

The similarities between Lil Nas X’s devilish “Montero” persona and HIM in The Powerpuff Girls are striking. Described by the cartoon’s Narrator as a “king of darkness,” HIM is the androgynous secondary nemesis of the titular powerpuff girls. Often suggested to be Satan, himself, HIM’s look can be described as high-femme (lobster claws, aside). He wears false lashes, a neat goatee, a pink and red ruffled mini-dress, and thigh-high boots. In the final half of the music video, Lil Nas X pole dances down to hell to claim his rightful seat on the throne as king of the underworld, red braids flying, legs sheathed in black leather boots.

The resemblance to HIM is uncanny, so much so that Twitter users are calling for the artist to play the villain in the live-action reboot of The Powerpuff Girls, planned to air on the CW. Lil Nas X’s prudish detractors are lamenting the singer’s departure from “Old Town Road” (which is no kids’ bop), but like HIM, he “never gives repeat performances.”

Lesser known than HIM is Red Guy, the primary antagonist in both Cow and Chicken and I Am Weasel. In the former’s pilot, “No Smoking,” jazzy music plays as the camera pans to cow and chicken’s nemesis, a red, nude demon. “Hello,” he drawls, surrounded by flames. “It’s me, the devil. I stand for all that is bad.” Lil Nas X, too, is “only here to sin.”

A parody of Satan, Red Guy seems almost designed to offend puritanical parents. Often in disguise to lure the main characters to their doom, the villain’s pseudonyms regularly reference his lack of pants: Officer Pantoffski, Principal Hiney, and NoPants DeLeon to name a few. And Red Guy’s butt—his literal butt—is a source of pride for the character and fodder for jokes. The sexual innuendo is strong in Cow and Chicken. In “Montero,” lyrically and visually, the symbolism is overt. As Lil Nas X sings, “I wanna feel on your ass in Hawaii.”

But the similarities between these characters and Lil Nas X in “Montero,” are more than just aesthetic. As demonstrated by Cartoon Network’s red devils, evil has often been associated with homosexuality because homosexuality has historically been considered perverse and even infernal.

In his art, Lil Nas X leans into the stereotypes and associations the creators of HIM and Red Guy employed to design their villains. The rapper embodies all sides of himself: tempted human, righteous angel, and, yes, lustful devil. Subversive in its joy, “Montero” gleefully confirms bigots’ worst fears: Lil Nas X is young, Black, and gay, and he has kinky, “gay” sex. But if these naysayers’ kids have ever watched Cartoon Network, it’s likely nothing they haven’t glimpsed before. Hail Satan. 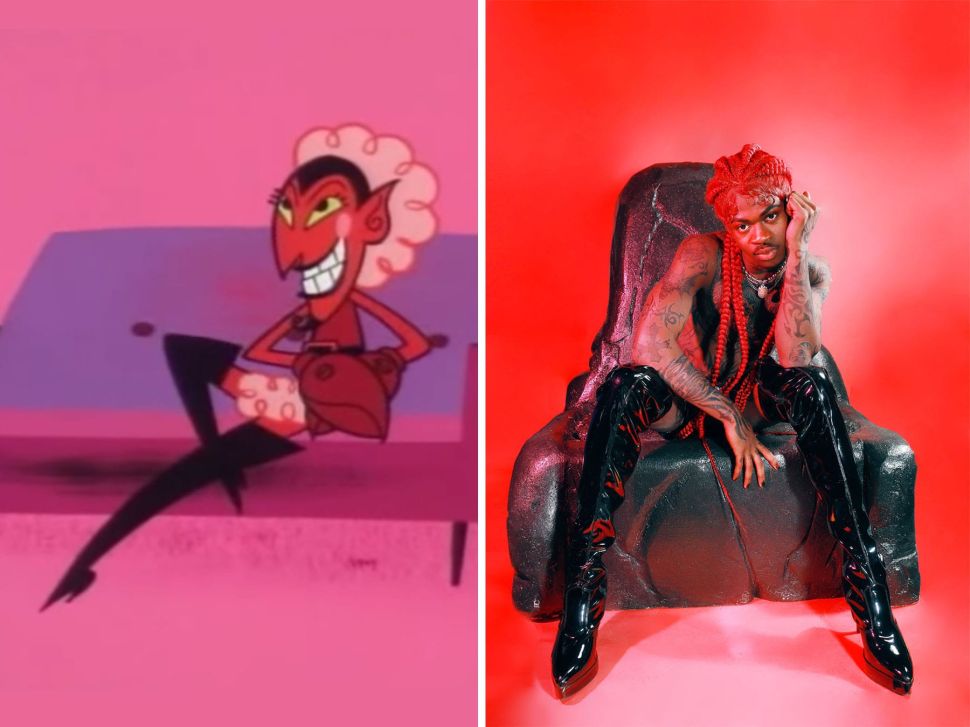