After a feudal elegant prologue set in Japan, we discover in the current revival of the Mortal Kombat film series that Earth, or more precisely “Earthrealm,” is “on the verge of catastrophe.”

It’s not political rancor, climate change, or even a pandemic that has put our world in such dire circumstance; rather, it’s our dismal record at the secret cross-realm fighting tournament of the movie’s title. We are zero for nine — one more loss to the barbaric Outworld and they will take over our world, in the process slaughtering all of its inhabitants. Yes, European football fans, there are fates worse than relegation.

It is difficult to consider this predicament and not think of movie theater exhibitors, whose business has long relied on the gore-hungry sentimentalists who are driven towards this sort of bloody spectacle, as long as it’s sanitized in a recognizable IP. Unable to safely compete in over a year, their current record against the Outworld of streaming services is arguably much worse. And now they have to side-eye HBO Max, whose customers for a limited time get access to the movie at the same moment that they do, and at no additional cost.

But that I spent so much of the movie concerned about the fate of theater distribution points to a fundamental issue with first-time director Simon McQuoid’s film, the first entrant in the series based on the beloved video game franchise in some 24 years. Within the movie itself, it feels like there is comparably little at stake.

In keeping with their video game origins, the characters haven’t much by way of an emotional life, or personalities for that matter. Instead, for audience connection, the film relies entirely on the fact that one of them was your favorite to play at some point in your life. (In the 90’s, I was strictly a Jax man, the ex-Special Forces Goliath with bionic arms, here played by Mehcad Brooks, James Olsen on The CW’s Supergirl.) This makes the chief new addition to the series — a past-his-prime MMA fighter named Cole Young (Chinese-British actor Lewis Tan) who engages with his destiny as Earth’s savior with all the urgency of a man doing his laundry on a Sunday — a uniquely ineffective choice for a lead character.

But what Mortal Kombat lacks in urgency, it makes up for in fights.

No matter how you spell it, the combat comes fast, and while perhaps not quite furious, it is at least reliable. Yes, the dialogue is borderline ridiculous — “We didn’t win nine straight tournaments by playing by the rules,” says a chief bad guy — but thankfully we don’t have to wade through much of it between bouts overstuffed with limb-ripping, lasers, fire and ice. (The ice-creating superpower employed by the main enemy Sub-Zero, played by Indonesian judo specialist Joe Taslim, is the film’s most impressive special effect.)

As for the violence itself, the movie’s attempts at blunt force — such as when one warrior pops another’s head like a Buzzfeed watermelon — are generally more successful than its endeavors towards wit. (Moments later, a character who earlier in the proceedings had rather randomly declared his distaste for garden gnomes by spitting on one, gets the offended red-capped figurine jammed through their eye socket.)

Copying the famed finishing moves from the video game — yes, a fallen opponent’s beating heart is yanked from their chest — seems to be at the top of the film’s agenda. With blood spouting up like from the Fountains of Bellagio, as well as a metric ton of f-bombs, the film carries around its R-rating, a first for the series, like a cat showing off a canary.

All of this gives the Australian-born McQuoid’s film a feeling of box-checking diligence rather than joyful or necessary expression. It will more than likely meet fans’ expectations for what they want in a Mortal Kombat movie but will fall short of exceeding them.

As for inspiring them to peel themselves away from their couches and off their gaming chairs enough to head to the multiplex and share the experience with strangers? I’m afraid that movie theater owners will need to wait for yet another warrior to champion their cause.

Mortal Kombat is in theaters and available to stream on HBO Max. 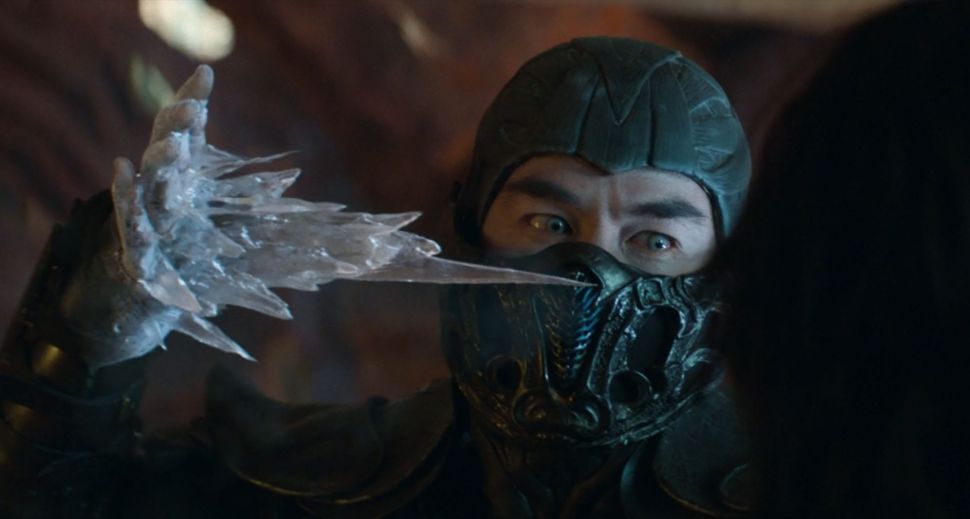