Together Together, writer/director Nikole Beckwith’s second film, fills a space you may not have realized was missing in pop culture. The unexpected movie, out April 23, is about a relationship between a man and a woman that isn’t romantic — and never needs to be. As fortysomething Matt (Ed Helms) hires twentysomething Anna (Patti Harrison) to be his surrogate, the pair develop a strong connection, one that feels unusual for the big screen.

“I was curious about two strangers endeavoring on such an intimate and emotionally charged circumstance together,” Beckwith tells Observer. “And to be so integral to each other moving into the next chapter of their own individual lives in such a big way. I was curious what that would do to a relationship. What kind of relationship would that potentially create?”

She adds, “I knew I didn’t want them to get together. It never occurred to me that they might together — that was not part of my curiosity. I wanted to explore one of the many other kinds of love that exist in the world that, for some reason, we barely pay attention to in pop culture.”

It’s nice to be watching something and rooting for them not getting sexual.

Because the viewer goes into the film with the history of rom-coms behind them, there is a sense that Anna and Matt could end up living traditionally happily ever after at the end of the story. But there’s also the feeling that you don’t want them to — it’s not a spoiler to say that Anna and Matt find their own paths — and Beckwith’s script subverts the expectation of what a film about two people is supposed to be.

“It kind of introduces you to how you really feel about that trope or the universality of the way stories are told,” she says. “It’s nice to be watching something and rooting for them not getting sexual. I didn’t plan it, but that’s part of the natural rhythm of experiencing the relationship. Which is cool. People are saying, ‘Oh it’s a rom-com turned on its head.’ But it’s not really. It doesn’t really follow rom-com structure. But that’s the way to understand it or contextualize it. It’s the closest thing we have.”

Matt’s character, too, feels unexpected for the big screen. While Hollywood makes lots of movies about women wanting to have babies or embracing an unplanned pregnancy, there isn’t a similar history of single men who simply want to be fathers.

“Men have biological clocks too,” Beckwith says. “We, as a society, are too obsessed with the female biological clock to share that space. I really am very used to seeing men reluctantly becoming fathers in pop culture or absorbing the blow of an unexpected positive pregnancy test or the wife being like, ‘It’s now or never.’ That’s really bad. I think that’s bad for women, I think that’s bad for men. Part of feminist filmmaking is deepening the representation of women onscreen and also deepening representation of men. Feminism is for everyone.”

She adds of Anna, “It’s also nice to see a female character whose identity isn’t corrupted or redefined in the wake of being pregnant. She maintains herself and understands herself and knows what she wants and knows her boundaries and what she’s capable of. That’s also important.”

The straight single dad element of the story initially confounded some producers, who weren’t used to characters like Matt. Single dads obviously aren’t unusual, but our onscreen experiences haven’t previously mirrored that reality.

“In the early days of shopping the script around people would ask, ‘What’s Matt going to do with this baby?’” Beckwith remembers. “Um, love it forever and raise it for the rest of his life? And they’d say, ‘And he’s straight?’ I was like, ‘Okay, nice to meet you. Bye.’ Those questions and that trepidation was further asserting the movie needed to be made. I was getting these rejections about making this but those [rejections] were also proving to me that the movie needed to be made. It was such a strange intersection.”

Beckwith wrapped production on Together Together in 2019 and finished the edit during quarantine last year, which meant she had the challenge of releasing the film during the pandemic. The movie was one of the breakout hits of January’s virtual Sundance and Beckwith didn’t feel like she was missing out the festival experience too much. Her debut feature, Stockholm, Pennsylvania, also premiered at Sundance in 2015, and that year she didn’t make it to anyone else’s screenings. This year, she saw 21 movies.

“People would ask, ‘What’s Matt going to do with this baby?’” Beckwith remembers. “Um, love it forever and raise it for the rest of his life? And they’d say, ‘And he’s straight?’ I was like, ‘Okay, nice to meet you. Bye.’”

“Hopefully Sundance will be back to its normal vibe next year, knock on wood,” the director notes. “But everyone will remember this Sundance because it was so crazy. I’m lucky in that I’ve been Sundance once before so I’d had the in-person experience to inform my digital experience. They did a really impressive, fantastic job of creating this digital space for the festival to run and trying to maintain some of the connectivity and energy behind the festival itself, which is part of what makes it so great and unique.”

Beckwith is currently working on a few TV projects, but she’s already begin writing some pages with ideas for her next feature. She’s joked with her manager that her process is to write a film, direct it and then take it to Sundance — at least, that’s how it’s gone for the filmmaker so far. And despite how refreshingly subversive Together Together feels, Beckwith isn’t out there trying to change the landscape of filmmaking or prove a point. She just telling the stories that interest her.

“Who knows what the next movie will be. I don’t consider myself an innovator or whatever, at all,” she says. “I really am just a storyteller. If anything is changing the landscape it’s up to audiences. That’s who tells the gatekeepers what they want. The more movies like this that get made, the less risky they will become. And the less risky it becomes, the more of it we’ll see. So I think of the audiences as the innovators.”

She laughs, adding, “So come on audiences, show up for this and stop watching movies where the 20-year-old girl is boinking the 40-year-old guy!”

Together Together debuts in theaters April 23. 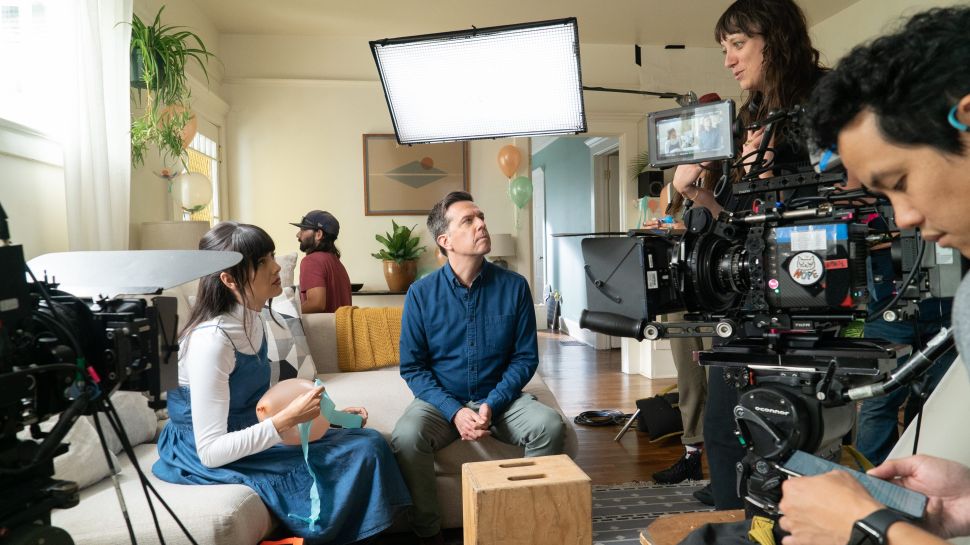