There’s perhaps no relationship structure more canonical in the art world than the classical pairing of artist and muse, especially if the two happen to be lovers. Pablo Picasso, the problematic genius whose misogyny was just as evident as his skill, got a great deal of mileage out of painting his muses. Buste de Femme Assise telegraphs his fascination with his second wife Jacqueline Roque, while Femme assise près d’une fenêtre (Marie-Thérèse), the painting which will serve as the centerpiece of the upcoming Christie’s 20th Century Evening Sale in May, captures the awe the artist felt for Marie-Thérèse Walter, a French model.

Because the monumental portrait of Walter is agreed to be one of the finest portraits that Picasso ever painted, it’s estimated to sell for approximately $55 million. However, there are several elements to the story surrounding the painting that might give a viewer or a patron of the arts pause. Walter was only 17 years old when her relationship with Picasso began, and she committed suicide four years after his death. These facts obscure the godlike qualities which the artist has captured on the canvas; clearly, he was enamored with the gorgeous Walter and placed her on a pedestal as a result. However, there’s no denying that the artistic results are stunning. Within the painting, Picasso’s vision of Walter is commanding, powerful and self-possessed.

“Femme assise près d’une fenêtre (Marie-Thérèse) was painted during a seminal year in which Picasso crafted a new pictorial language to depict his muse and lover,” Vanessa Fusco, the Christie’s Co-Head of the 20th Century Evening Sale, said in a statement. “This striking, monumental portrait was last seen publicly in the superb exhibition devoted to the artist’s ‘year of wonders,’ Picasso 1932, at the Musée Picasso, Paris and Tate Modern, London in 2017-2018.” 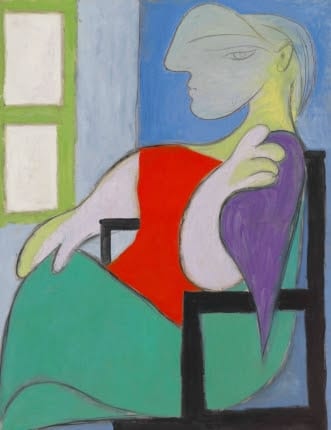