For years Roni Horn has cultivated an enigmatic presence within the confines of the art world. Engaging in a conceptual studio practice that spans mediums, Horn’s work has always been pushed forward by larger questions surrounding identity, the nature of being, perception, and meaning. “Roni Horn Recent Work” at Hauser & Wirth is a meditation on many things. It brings together many of the classic elements Horn has become known for such as drawing, but is reconfiguring what it is and how it functions within her work.

While drawing has been a part of Horn’s studio practice since the 1980s, she is revisiting within this latest exhibit with a new perspective. Horn, who once described drawing as “a kind of breathing activity on a daily level”, is taking this a step further in “Recent Work.” In this exhibit, the act of drawing takes on new meaning and is challenging how it has traditionally functioned.

From large scale works measuring roughly 7’x’7’ to pieces that are the size of a regular notepad to even sticky notes, “Recent Work” is overwhelming in size and also through the sheer force of information viewers are presented with. “LOG (March 22, 2019 – May 17, 2020)”  is an installation that consists of over 400 works on paper. The size is overwhelming as well as what Horn is pushing us to pay attention to. These pieces seem to function as a kind of diagram of Horn’s psyche, offering insight into how her mind processes information and creates connections in the world as well as her art-making process. There are multiple phrases, concepts, and topics that are revisited in the expansive works on paper touching on everything from an escaping octopus, photographs of the New York City skyline, selfies, journal entries, climate change, descriptions of the weather and other topics.

They are in some regards, a literal log of her thoughts throughout the 14-month period she created this work. The installation also takes on some obsessive qualities in terms of the repetition of ideas, words, and issues that come up that all are in conversation with one another. It feels like Horn, like the rest of us, was trying to get through COVID-19 in the best way she could, and tracking her observations and thoughts in these ways became about that and something else in the process. “LOG” is a series in and of itself, one exhibit could be dedicated to just this work.

‘Recent Work’ also features several pieces that were part of Horn’s two-part 2019 drawing survey ‘Roni Horn: When I Breathe, I Draw’ at the Menil Collection in Houston, Texas. The use of language and phrases in these works is complicated both in how Horn uses them and also in her exploration of trying to create new meaning for them. Phrases such as “Rome wasn’t built in a day,” “happy as a clam,” and “Elvis has left the building,” among others can be seen repeated throughout different works and bump up against one another literally on various pieces of paper.

In large-scale works such as in the series Wits End Mash, and in others, Horn silkscreened 300 handwritten phrases to create an overlapping effect. The works, although legible, become abstracted through their placement and also in their ability to create a larger image. It has a dizzying effect. Horn’s attention to detail and play with text, as well as the larger materiality of drawing itself pushes it to an almost sculptural realm.

There is a playfulness to Horn’s word drawings in particular. Using a wide range of idioms and phrases such as “a bee in her bonnet” or “hitch a wagon to a star” these, and others, become repeated and arranged in a multitude of ways. Sometimes side by side, on top of one another, others are written over, sometimes in graphite pencil, blue, green, brown, purple, and black marker, and felt tip pens. From a distance, the placement of the phrases forms a larger figure and upon closer inspection, they become separate parts of a whole. The organization of the phrases helps to create a larger part of the picture and each word and placement of them becomes dependent on one another. They also can read as a larger stream of consciousness poem or observation about the world. The work transcends itself and the process of Horn’s selection of phrases, their arrangement becomes another interesting element to consider given the information she is presenting.

Through the use of phrases and idioms that Horn has collected over the years, her conceptual process of categorizing and organizing them becomes another performative layer to how she is engaging with words. Horn is making words do what she wants them to through this larger intimate interaction with them. Through Horn’s word play she is also thinking about her relationship to language and how it functions. Adding another layer of complexity to this work as well, Horn enlisted the help of acquaintances, friends, and colleagues to help her source the hundreds of phrases used throughout these works giving it a performative element.

This larger thought experiment with words takes on a performative quality and brings to mind the work of British philosopher J.L. Austin. His seminal text How to Do Things With Words affected a generation of academics who were interested in pushing beyond the bounds of language and meaning through his development of speech acts, Horn is also redefining her relationship to language in these works. Where Austin tried to rethink the human relationships to language by thinking about how it can become performative and do things, to me, Horn is putting these concepts into action, consciously or unconsciously. Though Austin’s notion of speech acts which at its most basic understanding is predicated on the idea that all speech and utterances are doing something beyond our cognitive understanding of what the words and sentences mean and are taking on a larger performative understanding. Austin’s now famous text, was given as a lecture and later became a book further adding a layer of complication to what he did with words and how they exist in the world.

Over the last four decades, Horn’s artistic practice has sought to create new possibilities and create alternative ways of seeing the world. “Roni Horn-Recent Work” is some of her most ambitious work to date and is doing exactly what she set out to do––creating complicated relationships and giving viewers another perception of the world. While these works are hard to pin down they are also mapping time and defining what this moment was and is for her but also on a more collective scale. The show is complicated, funny, difficult, unnerving, and not what you quite expect, but this is Horn. Writing and words has always played a significant role in her work, but this show takes it to the next level and makes you focus on the meditative qualities it possesses but also what this can do outside of itself. 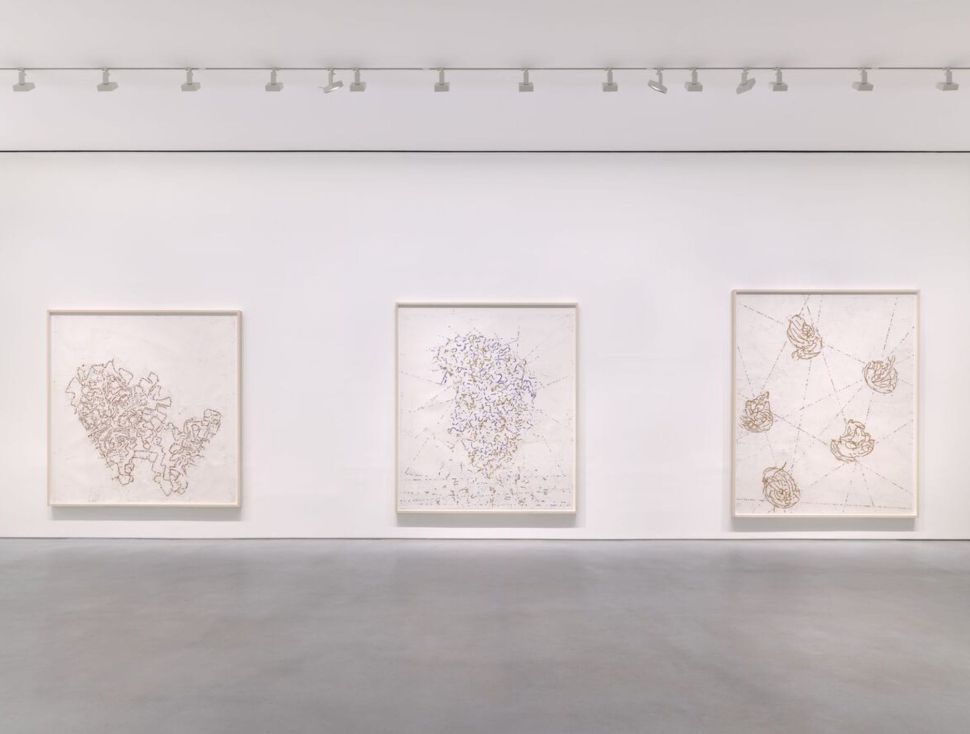