Since being cast as Bucky Barnes, a.k.a. the Winter Soldier, in Captain America: The First Avenger, Sebastian Stan’s career has taken a dramatic shift. The actor has recurred as the character in numerous Marvel movies, which has culminated in his starring turn on Disney+’s new series The Falcon and the Winter Soldier. But between blockbuster action films, Stan has shown a predilection for more eclectic projects, from I, Tonya to Destroyer to The Devil All the Time. His latest film, Monday, directed by Argyris Papadimitropoulos, is particularly intimate, a romantic drama that stars Stan and Denise Gough as a messy couple trying to make things work.

The film, shot before the pandemic and set for release on April 16 via IFC, is about what it means for two imperfect people to be in a relationship, a theme that attracted Stan. It chronicles the couple from their initial one-night stand—which ends with the pair naked on a beach—through their ups and downs while living together in Athens. It’s refreshingly raw and honest, standing in juxtaposition to the glossier world of Stan’s Marvel series.

In an interview during the film’s press day, the actor had a lot to say about his desire to make truly varied projects and his frustrations with how the media presents him. Like the film, the actor could also be categorized as refreshingly raw and honest.

Here Stan discusses making Monday, how he fights against complacency and why it doesn’t really matter that he got naked onscreen.

(Eds. note: After this story was published, Stan posted an image of his bare buttocks to Instagram yesterday. We’ve included it below for posterior posterity.)

Observer: Was there something specific that drew you to a film about a relationship?

Sebastian Stan: I’ve always loved movies like the Before Sunrise trilogy. Movies that were never really afraid of depicting relationships honestly. There’s a lot more foreign movies that do that than American movies, I find, although I like the typical romantic comedies as well. There’s a very small list of romantic comedies that are the best of the best, but most romantic comedies to me feel like they offer you this message that’s hopeful and filled with escapism and never really go deep into the mess that relationships are or the projections we often throw on another person that we meet. I was really interested in the movie because it felt very authentic. Like an authentic experience. A journey with a director and a co-star that asked to be a very collaborative process of truth. And the director had another movie before that I’d seen that I really loved called Suntan, which was extremely honest and beautiful.

I really appreciated how messy this movie allowed the characters to be.

Yeah. Well, I mean, that was sort of the point. I think people that watch the movie are going to be kind of mixed about it. It’s always very interesting for me to see people’s reactions when they’re like, “Well, I don’t understand! I wish [you were] going to hand me the ending!” There are always these endings in romantic comedies where it’s like a weird dopamine hit. It’s like drinking a Coca-Cola. It satisfies you a little bit, but it doesn’t offer you anything to take with you. And if you’re coming out of a pandemic where we’ve all been hopefully reflecting on the people in our lives and what does it mean for us to show up or not show up for the issues that are waiting at home, then watching a movie like this [might be helpful]. It’s all to say, “Look, it’s okay, we’re all humans trying to fucking figure it out. And it’s fine.” That, to me, feels like a much better message to younger people than often what they get from this Internet pseudo-reality that’s very far from the reality that you’re living in.

It was intense in different ways. It wasn’t intense like “Oh my God, how am I going to do these scenes?” It wasn’t intense from that perspective. It was intense by how uncertain the process was. A lot of it was discovered as we were shooting and it required us to stay open with each other and ourselves about the process, and not come in and try to control something or figure it out. Just to follow this train as we go. With all of these scenes we spent a lot of time talking about it and bringing in our own input. Each person brought their own experience, so it can be nerve-wracking from that point because you end up bringing a lot of personal stuff into it. You go home and you’re like, “Fuck, I don’t know. What does that look like?” You’re left feeling very naked—and literally, you are naked—but that’s the feeling.

Which made you feel more vulnerable, being literally naked or delving into the intense emotions?

I didn’t even care [about being naked]. The thing about the naked stuff is, right, sometimes you hear about movies having sex scenes or nudity or whatever and maybe that’s all people talk about. And for some reason if anybody does highlight only this once this movie comes out then that’s a shame because that’s just clickbait, which is what everybody is too lazy to admit they like to rely on nowadays. Like, “What’s going to get someone to read the article? Oh my God!” It’s like, “Give me a fucking break. Say an ounce of truth for once, you know?” But whatever. And I guess we were trying to say some truth with this movie.

What I’m saying is that nothing about it felt salacious or not earned. We always discussed [those scenes] and saw them from a place of “Yeah, in that situation that’s what would happen. They would be like that or they would be naked. They would end up in that way.” Argyris never shot those scenes in a way that [made us uncomfortable]. The nudity and the sex scenes were there to help bring depth to the film or help do some heavy lifting that was not being done by the performances or the story.

Why is it important to you as an actor to pursue smaller films like this alongside bigger projects?

I don’t think you should only do one thing. I’m not interested in that. I’m interested in continuously exploring different types of characters and stories. And sometimes things that scare me. More often than not, stuff that scares me. As I’ve gotten older that’s been more the case. I will much more drift now towards something that’s a terrifying thing because in a way that’s what keeps you on the edge of your seat. The thing that terrifies me the most is probably comfortability, or going back to a similar thing that you know you can hit a homerun with. What’s the point in that? At the end of the day find your cold shower, whatever that is, you know what I mean? That means, for me, a lot of trying to do different things as much as I can. I can’t always get the people to hire me that I want to hire me. I’m always still fucking waving a flag! But that’s all good. I’d rather seek out interesting collaborators like Argyris and know that he’s going to make a movie that’s going to be different.

Who do you want to hire you?

We’ll throw that out into the universe and see if it comes back to you.

Yeah! Or Kathryn Bigelow would another one.

“Winter Soldier gets naked in a movie called Monday.” I’m sure that’s going to be a headline.

When you’re trying to avoid complacency, is that challenging to do when you keep returning to play the same character for Marvel?

You do that by constantly looking for other things that keep you on the edge. The Marvel machine is just not in my control. It’s an amazing thing that happened to me that has afforded me opportunities like this movie. Then I feel like it’s up to me to go out there and do something with it, rather than wait for another call that may or may not come. Doing different things, funnily enough, actually makes me more excited to come back to Marvel. In a way, it keeps me going out there and exploring different things and then I come back to a character that’s familiar. And then sometimes I can bring something new to that character. The complacency is not really up to me. That’s what the media does—they like to put people in certain pockets and that’s it. Like “Winter Soldier gets naked in a movie called Monday.” I’m sure that’s going to be a headline.

If my editor makes that the headline of this article you’re going to be sorry you suggested it.

Well, you know what, it doesn’t fucking matter. At least I gave it to him or her for free. [The media] is going to do that anyway. It’s the nature of the beast. There was that Andy Warhol quote, right: “In the future, everybody’s famous for 15 minutes.” We’re in that future, man. It’s all about fighting complacency, and yet it’s what we’re all selling to each other.

Monday hits theaters and VOD on April 16. The Falcon and the Winter Soldier is streaming on Disney+. 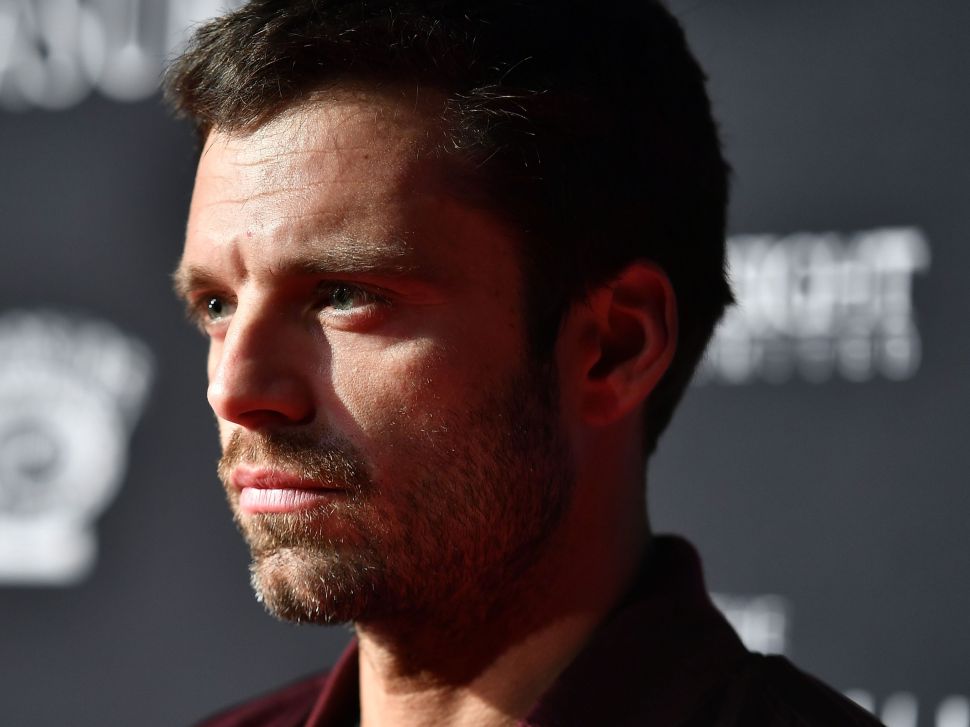