When Tan Kheng Hua received the audition sides for Kung Fu, a gender-flipped reboot of the 1970s series that she had watched with her late father, she tried to approach the audition like any other. Then, she returned home and returned to her chores, seemingly wiping the audition from her mind.

“I really believe in domestic therapy. I’ll do my laundry, clean my home, go to the supermarket, and then just wait for the next audition to come in,” Tan tells Observer in a recent Zoom interview. “I’ve always felt and believed in feng shui. If it is yours, it is yours. If it is not yours, it is not yours. I don’t spend too much time worrying about it, and then, very quickly, I was like, ‘Oh! I got in.’”

With a career spanning nearly three decades, Tan, who is best known for her work in the long-running Singaporean sitcom Phua Chu Kang Pte Ltd and the acclaimed romantic comedy Crazy Rich Asians, has used the same easygoing attitude to build an impressive international career.

“I’ve gone through so many dark periods of my life, but my art has always been there. I firmly believe in this way of living, and I hope to die like this.”

Earlier this month, the 58-year-old Singaporean actress broke new ground with her first American series regular role in Kung Fu, which is the first network drama to feature a predominantly Asian cast. The new action-adventure series stars Olivia Liang as Nicky Shen, a young Chinese-American woman who is forced to use her martial arts skills to protect her hometown after an unplanned three-year stint at an isolated Chinese monastery. Tan plays Liang’s hard-bitten mother, Mei-Li, who still harbors her own resentment for her daughter’s decision to abandon their family.

The middle child of liberal and accepting parents, Tan says that she was “always deeply interested in the arts,” but given the lack of native English-language productions in Singapore, she never thought that a career in entertainment would be a viable option. She discovered acting while studying abroad at Indiana University, where she went on to earn a Bachelor of Science in Public and Environmental Affairs.

“The wonderful thing about an American tertiary education is that you get a very well-rounded education. I wanted a very early morning class, so that I would finish my day at school early, and I discovered acting by taking an elective called Acting 101,” she recalls. “As corny as it sounds, I guess I very quickly fell in love with it. In hindsight, I think that love was exacerbated by the fact that it was an 8:30 class, which meant that whoever signed up for that class were really serious people who were all really interested in acting, and we had a wonderful teacher.”

After graduation, Tan returned home to Singapore, where she managed to balance a high-paying corporate job with a strenuous rehearsal schedule for local plays. “I would just run to the theater and I was just the most full-time, part-time theatre practitioner in Singapore,” she jokes, shaking her head.

“I would work from 8:30 until 6, and we would rehearse from maybe 7:30 to 1 in the morning. We were all young, so we would run off and have supper, talk, laugh and fall in love with each other,” she recalls. “We would go home at 4 a.m., sleep, wake up, put on make-up, put on our corporate gear and just go to work again.”

It would take Tan nearly a decade until she decided to quit her day job and pursue acting full-time. Having witnessed the rise of native English-language theater productions in her youth, Tan notes that she was fortunate enough to be in the right place at the right time, as she made her career change right when Singaporean television started their first English-language drama, Masters of the Sea, in 1994. A few years later, while also starring in stage plays, she landed a main role on the sitcom Phua Chu Kang Pte Ltd, which ran from 1997 to 2007.

In addition to starring in a number of Singaporean productions, Tan also became a prolific producer, creating and producing festivals and content across a variety of genres. Her success in Singapore eventually helped her land a guest role on NBC’s The Philanthropist and a recurring role on Netflix’s Marco Polo. But it is, without question, her portrayal of Kerry Chu—the mother of Constance Wu’s Rachel Chu—in Crazy Rich Asians that paved the way for a flourishing international career.

“It’s the stuff of my joy, to be working with wonderful artists from all over the world who have great talent, a wonderful attitude, a generosity of spirit, and a humility of heart,” Tan says of making the hit rom-com with an international cast in her home country. “I’m just going wherever good work takes me, and I would hope for all artists to experience this, because only art can give you that lens of perspective and beauty, to help you to frame your life in a way that helps you to find meaning. I’ve gone through so many dark periods of my life, but my art has always been there. I firmly believe in this way of living, and I hope to die like this.”

Having worked in both the East and the West, Tan is quick to highlight the differences between working in a smaller acting market versus a larger one.

“Despite the small market in Singapore, it really builds a sort of heartiness, a sort of resilience and resourcefulness, because there are smaller opportunities and the resources that are available to television are limited, especially because we are English-speaking artists,” she compares. “In this part of the world, one of the most wonderful things that I have enjoyed is the fact that, with the large market, it is so much more pristine much more detailed. I’m such a nerd, and I love being surrounded by so many people that may be in charge of one small aspect of this industry that I love so much, as opposed to a smaller market in Singapore where one person might be in charge of quite a few things.”

“Another big difference is the eye on celebrity. I wouldn’t say I’m unrecognizable in Singapore, but as a person, I guess I’ve never really taken celebrity [status] seriously,” she adds with a laugh. “I just take my work seriously, and this has been a very calming place to be [in North America] because all I do is keep concentrating on the work. I feel protected in that fashion, and I think that this particular point of view has been honed by the fact that for many years, nobody takes your celebrity [status] very seriously in Singapore.”

After the worldwide success of Crazy Rich Asians, a number of doors opened for her. With her daughter Shi-An off to university in Singapore, Tan moved to Los Angeles in search of more work. She obtained a work visa and signed with a new talent agency, making guest spots on Grey’s Anatomy, Magnum P.I. and Medical Police before she began production for Kung Fu.

“I was really free to explore doing this work in another place, and the minute I realized that, I would go for all sorts of auditions because every experience is new, and I can be quite fearless because I just want to experience the work,” she explains. “Nobody knows me here. I can redefine myself in any which way, and every experience has been really great.”

Since last October, the cast has been shooting the show under strict COVID-19 protocols in Vancouver, Canada, which has forced them to lean on one another in lieu of their loved ones who are stuck back home. For Tan, travel restrictions have foiled her plans to reunite with her daughter, and she has channeled her heartache into her portrayal of Mei-Li, who is trying “to love her children in the best way that she can, even if the best way might not always be the right way.” Tan has also grown closer with the rest of the cast, who affectionately call her “Mama Kheng” and, she says, “make me feel so safe.”

“The thing about COVID is that it really makes you understand why family is so important. I remember when we got out of the first quarantine at The Sutton [Place Hotel Vancouver], and I met [Olivia Liang] outside,” Tan recalls. “She could see in my eyes that I was like, ‘Okay, we’re going to start this. I’m alone here.’ She asked me how I was and I told her, ‘I miss my family.’ Then, she looked at me and she just said, ‘We’re your family now.’ That was a very long time ago, and now we really are family. My language of love is cooking and feeding people, and these people, every single one of them, they will eat anything I cook for them.”

While she admits that her experiences as a Chinese woman in Singapore are completely different from the ones of Asian Americans, Tan says that, through listening to her castmates, she has come to realize the importance of a show like Kung Fu in a time that has seen an alarming spike in anti-Asian racism.

After a strong debut, which saw a viewership of 1.4 million viewers for the first two episodes, Kung Fu will be looking to keep the ball rolling for the rest of the season. Tan teases that, in addition to showcasing all of the multifaceted characters in a non-judgmental way, “not everything that you see is what it seems” on the show.

“You have to keep watching to understand what really lurks underneath everything, because there are revelations that come up, and these revelations can be quite mind-blowing,” she says, laughing. “When we receive the scripts, we all go like, ‘Oh my goodness!’ And then we all start to text each other! We take screenshots of our script and we’re all like, “Oh my goodness! Oh my goodness! Oh, I don’t believe it! What, what, what?!’”

Kung Fu airs Wednesdays at 8 p.m. on The CW. 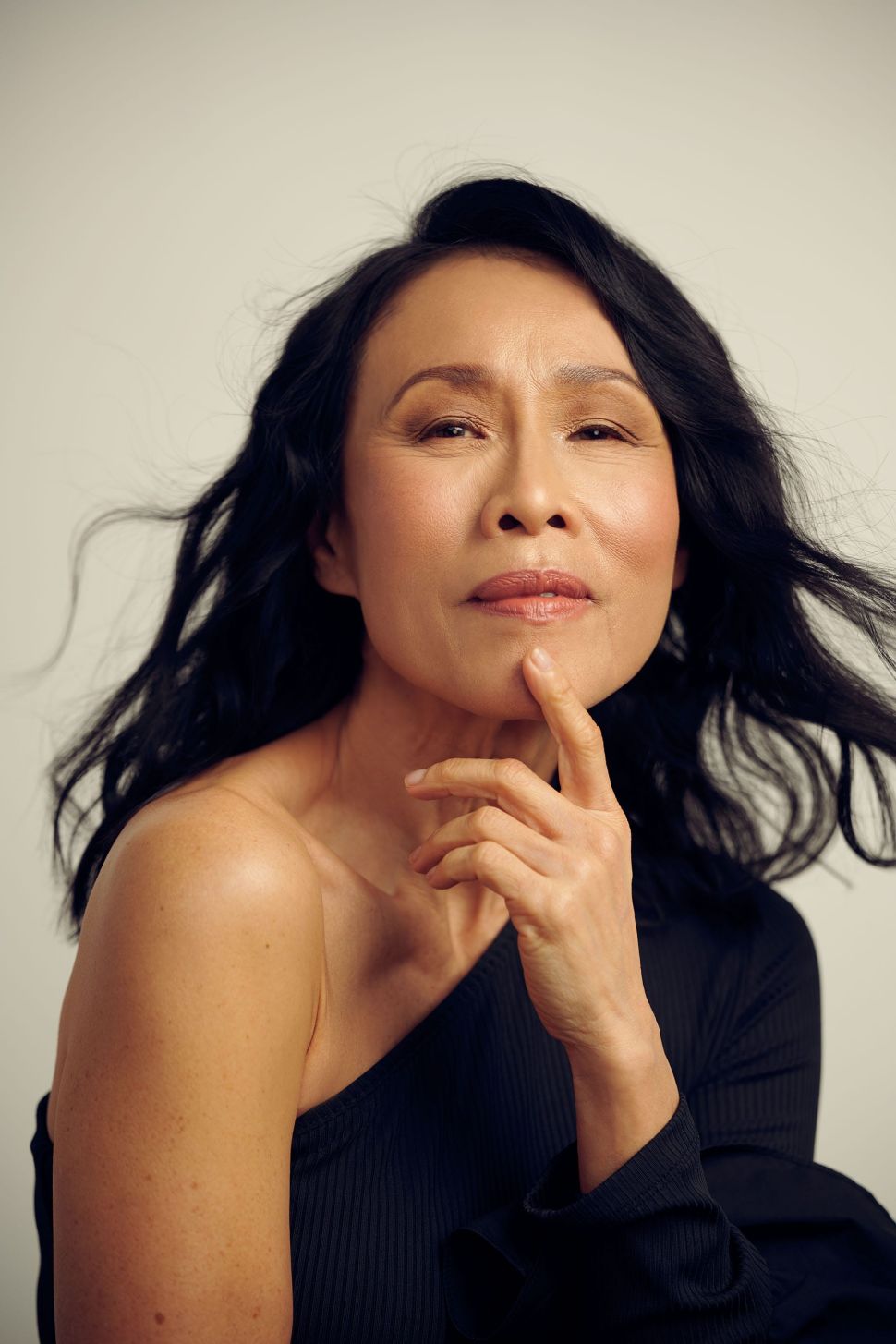