Two men died in a Tesla crash near Houston, Texas on Saturday night. The tragedy has earned national attention because authorities were “99.9 percent” sure that there was no one behind the wheel at the time of the crash.

The Tesla vehicle, a 2019 Model S, was traveling at a high speed and failed to navigate a turn before hitting a tree and bursting into flames, according to reports by local television stations. One man was found in the car’s front passenger’s seat, and the other was in the back seat. They were 59 and 69 years old.

“They feel very confident just with the positioning of the bodies after the impact that there was no one driving that vehicle,” Harris County Precinct 4 Constable Mark Herman told CBS affiliate KHOU-TV.

Herman said it took firefighters nearly four hours to extinguish the fire. At one point, crews had to call Tesla to ask how to put the fire out.

Police told The New York Times that minutes before the crash, the wives of the two men heard them talking about Tesla’s Autopilot feature, a driver-assist system that allows a car to drive itself in some situations. It is unclear yet whether the Model S’s Autopilot was on when the deadly accident happened. The police investigation is ongoing.

Houston police say a deadly car crash involving a Tesla vehicle was believed to have been operating without a driver at the time of the incident https://t.co/f6tcOrC6Q2 pic.twitter.com/jnmRN1D3Nz

Tesla has released several versions of Autopilot systems over the years. A basic version of Autopilot, which is similar to a cruise control system, comes with most new Tesla purchases. A separate and more advanced software, known as Full Self-Driving, or FSD, is available to some Tesla owners in the U.S. for $10,000.

Despite what their names might suggest, neither system is capable of fully autonomous driving. (In Germany, Tesla is prohibited from using these words in its advertising.) In a document filed with the California DMV last month, Tesla said the final version of FSD will remain at level 2 under the six-level scale of autonomous driving defined by the Society of Automotive Engineers (SAE). Level 2 autonomous driving requires an attentive driver behind the wheel at all times.

To date, car crashes involving Tesla vehicles have resulted in 175 deaths, six of which involved Autopilot or FSD, according to TeslaDeaths.com, a site tracking Tesla accidents. In 2021 so far, 12 accidents involving Tesla cars have killed 18 people. Tesla was not at fault in every recorded incident, yet the death toll is alarmingly high compared with other carmakers manufacturing midsize luxury vehicles.

Update on April 20: Elon Musk tweeted Monday afternoon that data recovered from the crashed Tesla car showed that Autopilot was not enabled and that the car didn’t purchase FSD.

Adding to Tesla’s trouble is an unexpected protest in China, Tesla’s largest overseas market. At the Auto Shanghai Expo on Monday, a woman wearing a T-shirt that read “The Brakes Don’t Work” climbed atop a Tesla Model 3 at the company’s booth, shouting about Tesla’s faulty brakes. She was quickly dragged away by security guards, photos and videos taken by visitors show.

+ yesterday in China, a young woman went to the Shanghai Auto Show to protest Tesla before being dragged away like this ⬇️. Her shirt says: “Brake malfunctions.” She previously said that the brakes of her Tesla Model 3 had failed which almost killled four of her family members. https://t.co/gmC2wtnZGr pic.twitter.com/OJlaMAHe4p

Tesla China said the protester was the daughter of a Model 3 owner from Henan province who was injured in a February crash. The woman, who had staged protests against Tesla in other places, claimed that a faulty brake had caused the crash. Tesla insisted that her father had crashed due to speeding. 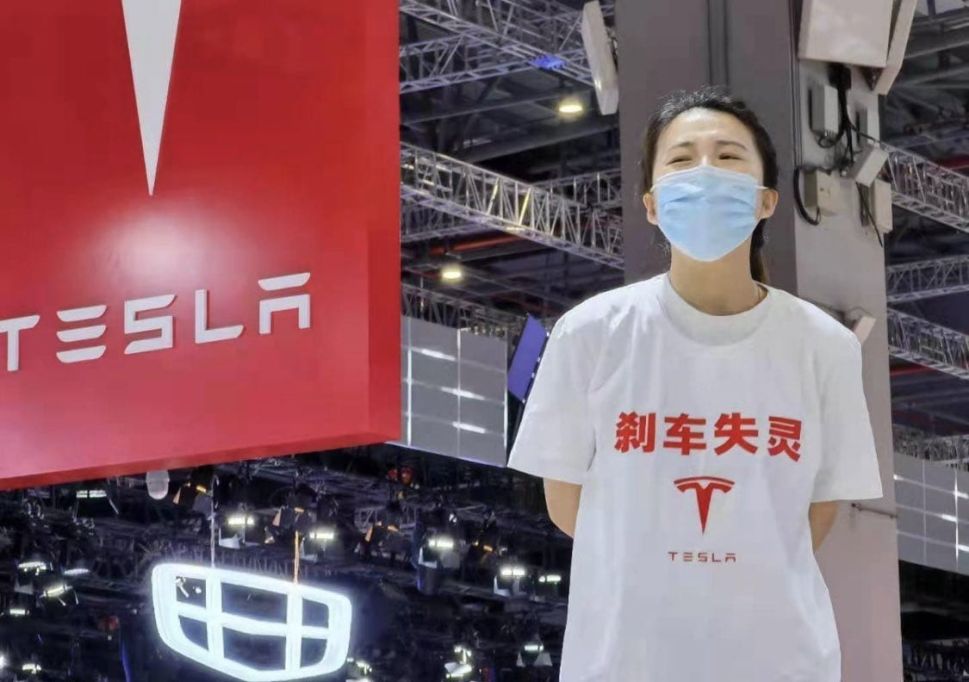