Disney+’s six-episode series The Falcon and the Winter Soldier is the Marvel Cinematic Universe’s most forthright critique of American racism, both at home and abroad. It’s also the most direct and frustratingly blithe defense of American virtue despite that racism. This isn’t a contradiction so much as it is a tactic. The series presents a radical condemnation of the American way precisely so that Captain America can neutralize that condemnation with a mixture of brawn and high-mindedness. The series is a masterclass in just how thoroughly superhero genre conventions can rationalize, and ennoble, power.

The Falcon and the Winter Soldier is set after Avengers: Endgame (2019). In that movie Steve Rogers (Chris Evans) abandoned his role as Captain America, and willed his shield to the Falcon, a.k.a. Sam Wilson (Anthony Mackie). Sam, as a Black man, is conflicted about taking on the role, and gives the shield to the government for preservation. The U.S. immediately turns around and creates a new Captain America, John Walker (Wyatt Russell), a decorated veteran of Afghanistan. Sam, John and Sam’s friend Bucky, a.k.a. the Winter Soldier (Sebastian Stan), spend most of the series trying to hunt down the Flag Smashers, a radical group advocating for open borders. They are led by Karli Morgenthau (Erin Kellyman), a teenager who has been injected with the super soldier formula that gave Steve his powers originally.

Though Falcon and Winter Soldier is at first coy about addressing racism directly, it becomes more and more explicit as it goes on. Karli, who is Black herself, leads a group of multi-racial refugees who demand that the U.S. and international organizations provide housing and help to the people displaced after the catastrophic events of Endgame.

The American flag, in this context, is not a symbol of freedom. It’s a symbol of violent subjugation and death.

In perhaps the most memorable scene of the series, John Walker, wearing the Captain America suit, and standing on foreign soil, beats one of the super-powered refugees to death. The image of the red, white, and blue shield stained red with the blood of a person-of-color is a shockingly direct depiction of imperial violence. The American flag, in this context, is not a symbol of freedom. It’s a symbol of violent subjugation and death—the flag of drone strikes, of war in Iraq, and of refugees callously turned away.

Nor is the violence and death reserved for those overseas. Back home, Sam visits Isaiah Bradley (Carl Lumbly), a Black man who was given the super-soldier serum as part of racist medical trials by the U.S. government during World War II. The evocation of the infamous Tuskegee experiments is surely intentional.

Other Black soldiers who were given the serum died. Isaiah was imprisoned for thirty years while the U.S. experimented on him and punished him for performing a heroic rescue against orders. He eventually managed to escape. But his story echoes that of many other Black people imprisoned and brutalized in the U.S. “justice” system, and his indictment of his captors is searing. “They will never let a Black man be Captain America,” he tells Sam, who listens with sympathy and horror. “And even if they did, no self-respecting Black man would ever want to be.”

Lumbly’s anger and bitter dignity is riveting; it is easily the most compelling performance in the series. Sam has a more positive view of America and of working within the system, but he has no real response to Isaiah. Nor does he need one, because the superhero genre conventions are all on his side.

The writers carefully delegitimize Karli by having her murder civilians (a narrative tactic also used to turn viewers against the Black radical Killmonger in Black Panther). By the end, she can be dismissed as a “misguided teenager,” in Sam’s words. John Walker, the imperialist murderer, is casually rehabilitated because he opposes Karli. The life of the foreigner he beat to death doesn’t matter enough to quibble about.

In last week’s finale, Sam, clothed in the flag, saves a bunch of politicians and then delivers a stirring speech. “I’m here, no super serum, no blonde hair or blue eyes,” he says, openly acknowledging the racism he faces. “The only power I have is I believe we can do better. We can’t demand that people step up if we don’t meet them halfway.”

His rhetoric, of course, sways those in power, who are good at heart. It even sways Isaiah Bradley, whose fierce denunciation of compromise mellows into avuncular agreeableness. “I mean you ain’t no Malcolm or Martin,” he says, but it’s meant as friendly ribbing, and effectively suggests that Sam may indeed belong in that company.

Sam isn’t to blame because he believes in compromise. Barack Obama wanted to meet people halfway, too. Even John Lewis saw virtue in working within the system. Reform vs. revolution is a longstanding argument in Black resistance movements. It’s exciting to see the MCU portray that on-screen.

The problem is that Sam’s ideological victory—over Karli, over John Walker, over Isaiah—is too easy. Even before The Falcon and the Winter Soldier started, viewers knew that Sam would become Captain America by the end. The image of a Black man wearing the stars and stripes is, as the series acknowledges, fraught. And yet, when Sam puts on the costume, and gives a speech, the history of American imperialism and racism melts away so thoroughly that even John Walker is forgiven. Karli and Isaiah may get a moment to point out there’s blood on the shield. But Captain America is the hero, and that means all the resources of the MCU are devoted to making sure that, by the end at least, you don’t see the stain.

The Falcon and the Winter Soldier is streaming on Disney+. 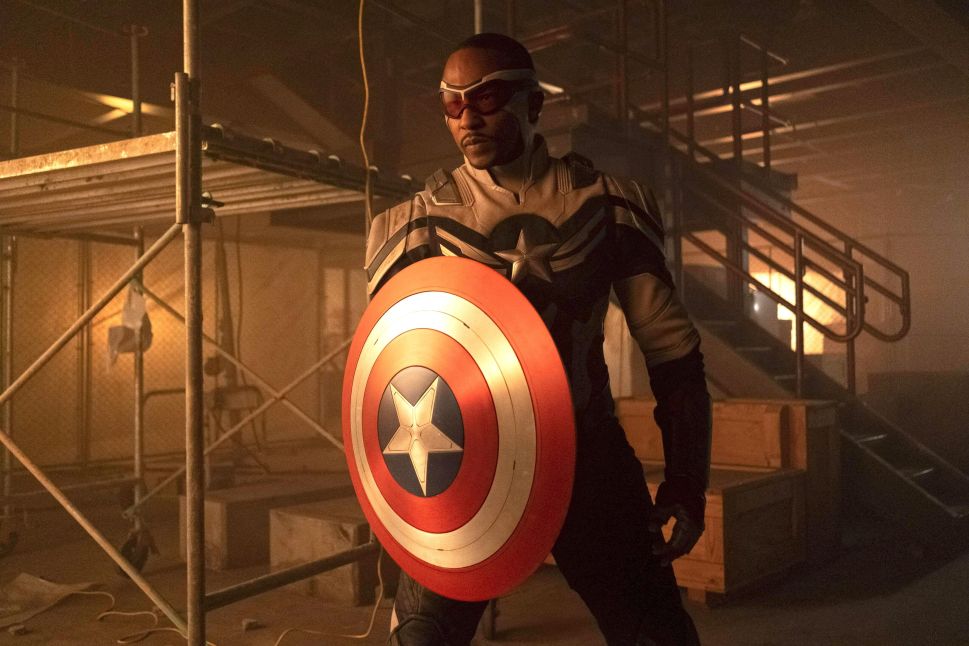