Toxic nostalgia for Cold War machinations and defense budgets is the malevolent force that fuels the nefarious events that take place within Tom Clancy’s Without Remorse, the origin story for one of the bestselling novelist’s most popular characters. It’s also the primary life force behind the movie itself.

Yes, the action begins in Aleppo, Syria, where a special ops team violently extracts a hostage on behalf of the CIA. But its focus quickly shifts from a post-9/11 footing to a Reagan-era one, where the bad guys are well-funded Russian operatives and shifty government officials with wavering allegiances who may or may not be conspiring with them.

But while the milieu may feel as mildewed as your Grandpa’s favorite paperback (Clancy got paid a then-record $14 million for the book when it was published 1993), the film’s other chief reason for existence — as a platform to show off the action hero bone fides of the film’s star Michael B. Jordan, who also serves as a producer — feels a bit fresher.

After explosive turns as a brash underdog boxer in 2015’s Creed and its 2018 sequel as well as the rage-driven Killmonger in that year’s Black Panther, it seems well past time to give the onetime Friday Night Lights and The Wire actor the keys to his own military hardware-laden franchise. His character, John Kelly (who later becomes John Clark), has in the past been played by Willem Dafoe (Clear and Present Danger, 1994) and Liev Schreiber (The Sum of All Fears, 2002) and is featured in the popular video game series Tom Clancy’s Rainbow Six.

With his outrageously articulated physique and an unsmiling visage featuring faraway eyes conveying both determination and recently experienced loss, Jordan is more than up to the task.

The actor distinguishes himself especially well in two of the film’s big set pieces, one where he fends off an onslaught of armored guards shirtless in a tiny prison cell and another where he must escape an airplane that was downed by a Russian fighter jet and crashes into the Bering Sea. (He took off his white t-shirt to clog up the sink, the wet floor apparently giving him a tactical advantage; whatever the reason, expect to find yourself hugely disappointed he never found cause to go sans top again.)

But Jordan is fighting against the current of the film — directed by Sicario: Day of the Soldado’s Stefano Sollima and written by that film’s Tyler Sheridan, reworking Will Staples’ adaptation — when he attempts to imbue the character with any sort of emotional gravitas.

Kelly is driven by revenge after Russians murder his pregnant wife Pam, played by Lauren London (she’s killed by a marauding horde of Baltimore pimps and drug dealers in the original book); but the relationship feels more symbolic than anything real. Kelly has little inner life. He likes to listen to “music” late at night, but the film never bothers to specify what kind. And he has only the haziest of relationships outside of the military. (That Colman Domingo shows up in a grand total of two scenes as a barely there pastor feels criminally negligent following his breakthrough performance in Ma Rainey’s Black Bottom.)

Without Remorse pretends, for the briefest of moments, to be interested in the matters of race and social justice that have driven other Jordan films, such as 2013’s Fruitvale Station and 2019’s Just Mercy.

“We served a country that didn’t love us back…because we believed in what it could be,” Kelly tells his Lt. Commander, played by Jodie Turner-Smith of 2019’s Queen & Slim. But both Kelly and the movie almost instantly drop the idea, as not to offend the often conservative legions of fans who have kept the Clancy train chugging some eight years after the author’s death.

Without the grounding of richly drawn characters and burdened by ideas that reflect Pentagon policy papers of the late 1980s rather than our current world, Without Remorse has the feeling of product rather than cinema — just another polished, consumer-facing, slightly stale gizmo scooting down the virtual Amazon assembly line. It’s just that this sturdy if unspectacular piece of manufacturing happens to have the hard-working, earnest and magically delicious Jordan as its well-meaning pitchman.

His presence is just barely enough to allow you to move past the sins of the film’s creation, especially when the guy takes his shirt off. 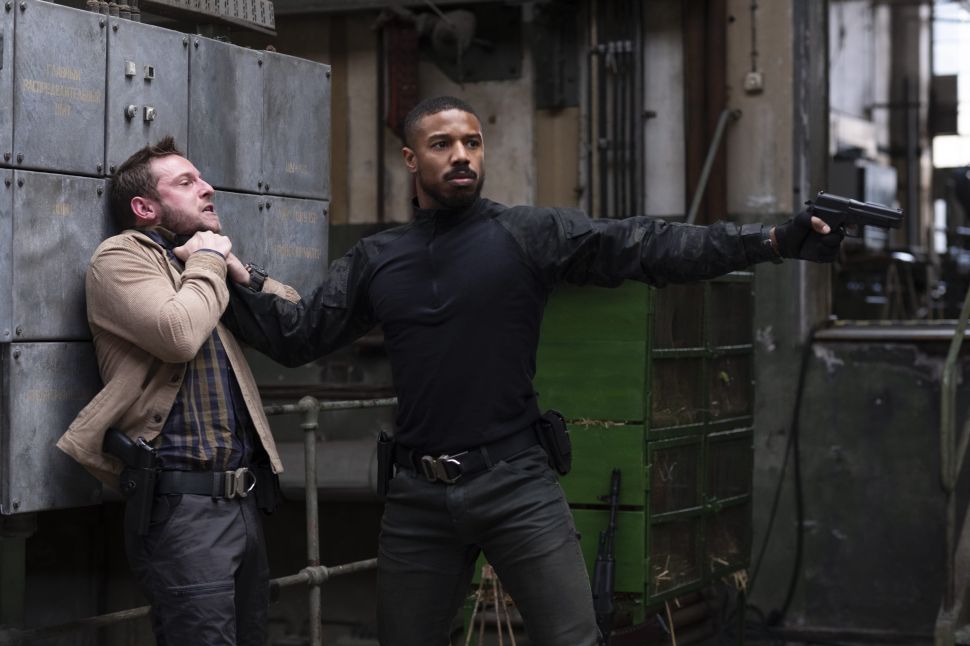