When it comes to apocalyptic imagery, it doesn’t get much more dire than pictures of a burning library, and devastatingly, a fire that’s recently torn across South Africa’s Table Mountain down to the University of Cape Town has produced just such imagery. Over the weekend, the fire, which was exacerbated by acutely high temperatures in the region and heavy winds, ripped into the University of Cape Town’s Jagger Library; it’s likely that the incendiary incident has laid waste to thousands of irreplaceable books, manuscripts and other scholarly items.

According to the Washington Post, the Jagger Library in particular contains 1,300 smaller collections of manuscripts and personal papers in addition to its main materials, which consist of printed and visual items related to African studies. The library also contains 85,000 pamphlets, books and papers pertaining to African studies, as well as one of the most fully realized collections of African film in the world.

Unbelievable — the UCT libraries with priceless rare books is being gutted by the #CapeTownFire (Video from WhatsApp) pic.twitter.com/7RI4dsxD3U

According to officials from the University of Cape Town, it’s not clear at this time just how much damage has been done by the fire. “At this stage, we can confirm the Reading Room is completely gutted and thankfully the fire detection system in place triggered the fire shutters, thereby preventing the spread of the fire to other parts of the library,” Ujala Satgoor, the executive director of UCT Libraries, said in a statement obtained by the Washington Post.

“Some of our valuable collections have been lost,” Satgoor continued. “However a full assessment can only be done once the building has been declared safe and we can enter.” Last year, New York’s Museum of Chinese in America suffered a similarly devastating fire that ripped through their collection of over 85,000 items, but the Museum was able to fundraise in order to recover and digitize much of its surviving materials. Hopefully, the University of Cape Town will be able to pull off something similar. 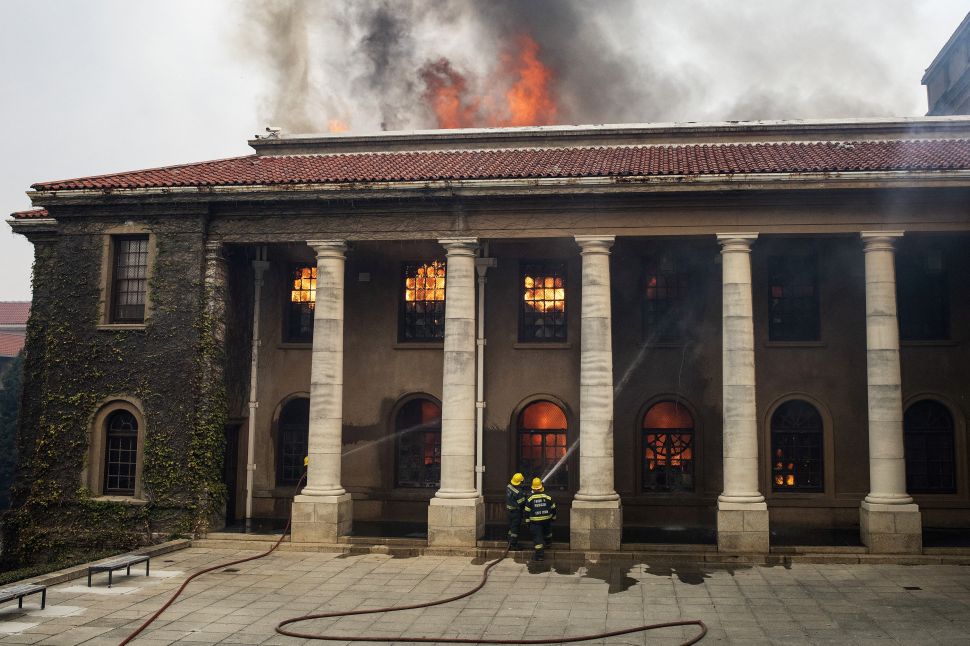