During a recent visit to the Elkon Gallery in New York, where her show From the Floating World is exhibited, Vicky Colombet, a usually calm person, gets ecstatic while showing Monet’s famous Matinée sur la Seine, the series that inspired her work. She flips the catalog over to inspect how the reflection confuses the viewer, unable to tell which side is reality and which its reflection.

“Monet is asking the fundamental question of the relationship between man and nature, but he was already asking it at a time when nature was taken for granted,” she says to Observer.

This radical modernity is what excited her when Marianne Mathieu, the director of the exhibition Monet/Colombet: Peindre comme la rivière (Monet/Colombet: Painting like the River) at the Musée Marmottan-Monet in Paris asked her to enter this dialogue. “We wanted Colombet to go beyond the master, to put her own viewpoint as well as our era in conversation with his work,” Mathieu says to Observer.

Vicky Colombet is a Franco-American artist who grew up in Paris. Her mother was Filipina and took her on travels throughout Southeast Asia and India, which she describes as her first aesthetic experiences. Her father owned a print shop, and wanted her to study law. She trained in the studio of Henri Dimier in Paris, while being an important part of the French feminist movement of the 70’s, close to Simone de Beauvoir, she helped create an independent journal, The New Feminists in 1974. Now in the US, she works in the Hudson valley, and like Monet, spends a lot of time cultivating her garden.

Colombet worked on this series for four years, immersing herself in Monet’s work, “the more I studied him, the more I loved him,” she says. Both artists share a passion for nature, and seem to appeal to it as a healing force. Monet painted the Matinée sur la Seine in a time of distress, his partner’s daughter, Suzanne, was struggling with a long disease that would eventually kill her. Colombet is painting in the midst of a global pandemic. But neither put their feelings at the center of their work, “they are both incredibly humble,” Mathieu says to Observer, and the work always exists beyond themselves.

But unlike Monet, who tightly controlled the narrative of his paintings, letting the trace of his hand be visible on the canvas, Colombet almost erases her own presence. She lets the viewer connect with her art and with nature directly. She uses brushes made of goat and squirrel hair to avoid leaving stroke marks, and lets the liquid paint drip where it may, at times escaping the canvas itself onto its sides. Her name is only signed in the back.

Colombet uses nature as an ingredient in her work. Like artists of the Quattrocento, she still works with pigments, which she grinds herself by hand, working with solvents almost at the molecular level to achieve the perfect consistency. She even thought about putting her canvas directly into the river, and let it paint it as it willed.

“Colombet is in constant dialogue with the elements,” says Marianne Mathieu.

Monet was one of the first to leave the comfort of the studio and immerse himself fully in nature. Akin to a duel, he would challenge himself to paint under the worst conditions, under the perpetual rain of Bretagne, on a boat in the middle of the tempest, or at the will of the perpetually changing light. “He was in an anguishing process of control,” says Marianne Alphant, author of Claude Monet, une vie dans le paysage (Claude Monet: A Life in the Landscape), adding “he would despair in these extreme situations, trying to capture the landscape at the exact right time.”

The elements were a means to an end, to master a technique, and render the truest version of nature. In a letter sent in 1890, he wrote: “I started again impossible things to do: with grass that moves under it… it’s beautiful to see, but it is driving me mad trying to replicate. Oh well, I always tackle these kinds of things!”.

Sometimes, Colombet will stop, leaving blank space on the canvas, because she feels it is ready. She invites the viewer to see her process, and to accept the painting for what it is, complete in its own way, without trying to master it.

In Colombet’s paintings, is not a vector, but an element worth observing in detail and fascination. Her large painting Eau et Lumière ( and Light) focuses on the movement of the waves on the surface, sucking the viewer into their playful dance. Her work is never static, always reaching for a better comprehension of nature’s forces. Although these large blue canvases could represent anything, there is a personal feeling of understanding that comes from looking at her paintings, like one knows it.

“There are no representations of landscape in Colombet’s canvases, yet viewers know: what they are seeing is a trace, an imprint, an X-ray of natural events—waves, folds, flows, a gust of wind, sliding, shimmering, tremors,” writes Marianne Alphant in her introduction to the catalog of another recent show of Vicky Colombet’s work at the West Bund One Art Museum in Shanghai.

Colombet will say freely that nature saved her, at a hard time in her life, it is the river at the heart of nature in France’s Cevennes that healed her. And now, after a dark year, she is sharing this gift with us. “I want people to sit next to me by the river, and to convey not my pathos, (…) but this serenity, this beauty of nature, which is so much stronger, so much bigger than us,” she says. 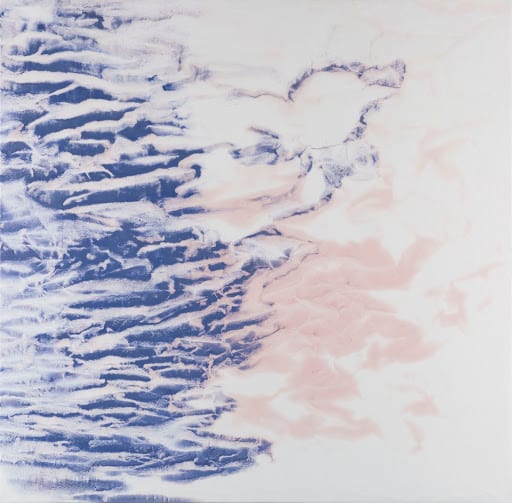