Last month, we ran a piece detailing how the colloquial streaming wars will be dictated by future consolidation, mergers, and acquisitions. On Monday, following a weekend of whispers, AT&T and Discovery Inc. officially announced their intentions to merge their entertainment assets in a pact that will unify brands such as CNN, TBS, TNT, HGTV, Food Network, Discovery Channel, Warner Bros.’ movie studio, and streaming services HBO Max and Discovery+. It also couples WarnerMedia’s U.S. sports rights such as the MLB, NBA and March Madness with Discovery international sports titan Eurosport.

According to a joint press release, the companies are combining assets in order to construct a “premier, standalone global entertainment company.” The goal is for WarnerMedia’s deep war chest of content and high profile IP to match with Discovery’s global footprint in a mutually beneficial union.

“The new company will be able to invest in more original content for its streaming services, enhance the programming options across its global linear pay TV and broadcast channels, and offer more innovative video experiences and consumer choices,” the press release reads.

Shares of AT&T have already jumped about 4% and Discovery to 13%. However, at this early juncture, we still have absolutely no clue what this will truly mean for you, the consumer and audience member. So let’s review the major talking points to begin to understand the industry reverberations.

What AT&T’s WarnerMedia and Discovery deal lays out

WarnerMedia and Discovery are merging in an all stock deal that will see AT&T receive $43 billion in cash, debt securities and WarnerMedia’s retention of debt. AT&T stockholders will then own 71% of the newly merged company, with Discovery owning the remaining 29%. The deal is expected to close, pending regulatory approval, in 2022.

The combined company is projected to have $52 billion in revenue in 2023 and leadership says there will be $3 billion in cost synergies through the merger, per THR. AT&T will then refocus on its core telecom business: 5G and fiber broadband.

In a join press conference Monday morning, Discovery CEO David Zaslav said the combined company would spend about $20 billion on content per year. For reference, Netflix is expected to spend upwards of $17 billion on content in 2021. It is not yet clear if the new company will look to bundle its respective streaming services, HBO Max and Discovery+, or combine them into one mega-streamer. More on that down below.

Will the new WarnerMedia-Discovery entity keep users within its streaming ecosystem with a bridge between Game of Thrones and Flip or Flop?

Why make this deal? For starters, scale is crucial in the eyes of Wall Street, even though the financial epicenter of the world often overvalues sheer size at the expense of strategic acquisitions. But in a streaming field where Netflix (208 million global subscribers), Disney (159 million) and Amazon (200 million potential Prime Video users) generate mind-boggling D2C volume totals, the merger of WarnerMedia and Discovery makes strategic sense. The streaming wars are already overcrowded with combatants. Reforming into one fortified unit with harmonious strengths gives them a better shot at success than two separate competitors.

According to the Financial Times, the combined company will hold an estimated enterprise value of $150 billion. Entertainment value includes in its calculation the market capitalization of a company but also short-term and long-term debt as well as any cash on the company’s balance sheet. For a loose comparison, rivals Netflix ($218.76 billion) and Disney ($315.31 billion) hold significant market caps as of this writing.

AT&T took a tumultuous path toward this merger

To better understand the current strategic upheaval, it would help to have a grasp of AT&T’s recent transactions, particularly under current CEO John Stankey. As always, context matters.

Over the last six years, AT&T has made a series of moves that wound up hurting the company. In 2015, Stankey (then CEO of AT&T Entertainment and Internet Service) spearheaded an acquisition of DirecTV for $67 billion, including debt. Since the purchase, the pay-TV bundle has spiraled downward on an irreversible decline.

A year later, AT&T began its acquisition of Time Warner, which ran into significant opposition from the Department of Justice. After winning the case in 2018, the company shelled out $85 billion and rebranded it as WarnerMedia. In 2020, investor concern about AT&T’s $150B debt load and attempts to compete in entertainment media echoed throughout Wall Street. AT&T was the only major company with a Hollywood footprint to actually lose market cap value over the last 18 months.

Stankey was promoted to AT&T CEO in April 2020. In February 2021, the company sold off its DirecTV business at a major loss in a $7.8 billion deal with TPG Capital. Now, three years after acquiring WarnerMedia, AT&T is spinning it off for just $43 billion, or roughly half of what it originally paid. Sub-optimal.

There are two ways of looking at this most recent move:

The first is as a concession that AT&T misread its ability to use WarnerMedia entertainment assets and HBO Max to drive business to its core telecom endeavors. WarnerMedia didn’t provide enough profit under AT&T to ease Wall Street concerns and the massively expensive pivot to streaming has been a distraction instead of an addition to AT&T’s primary ventures. From the outside, it’s remarkably easy to look at this move as an embarrassing industry failure.

The more optimistic outlook is that a joint venture in which AT&T is the largest shareholder is not a waving of the white flag, but an opportunity to create more value for investors outside of AT&T. According to former Viacom digital media exec and founder of streaming newsletter PARQOR Andrew Rosen, “AT&T’s ecosystem has not been providing growth but HBO Max’s Retail DTC business has been. So WarnerMedia and HBO Max may be better off outside of AT&T’s ecosystem to grow and adapt than within AT&T.”

The potential benefits in Rosen’s eyes include passing off debt to a new entity in return for some cash. AT&T’s net debt of $168.9 billion is suddenly reduced by more than 15%.

Still, it’s impossible to ignore that roller-coaster ride WarnerMedia employees have taken over the last three years. After several major hierarchal and organizational restructurings, including the ouster of long-term Time Warner executives as well as a revolving door of new hires, the company is facing yet another significant overhaul. It’s exhausting.

The strategic assets WarnerMedia and Discovery bring to the table

The good news is that this merger is mostly about the fusion of complementary pieces. Discovery traffics in low-cost, highly bingeable unscripted fare such as 90 Day Fiancé. WarnerMedia has a long and storied track record of premium programming ranging from Warner Bros. blockbuster films to HBO’s library of prestige TV offers and more. It’s an additive merger with less overlap than, say, Disney’s acquisition of Fox. The two companies have a wide-ranging portfolio of programming hubs.

Here’s where things get tricky, however. Both entities still have a sizable footprint in linear television. WarnerMedia’s Turner Broadcasting division (TNT, TBS, CNN) as well as cable operations such as HBO keep it tied to the legacy medium as does Discovery Inc. via Discovery Channel, Animal Planet, Science Channel and TLC.

Unless WarnerMedia-Discovery suddenly grows wings, it’s unclear how much longer their attachments to legacy media will be able to return significant value.

Per Discovery’s own earnings report, the company is the “most-watched pay-TV portfolio in the U.S.” and earned 67% of its $2.79 billion in 2020 revenue from domestic networks. This does enable the combined company to mine a significant level of value from linear business, which still stands at 74 million customers in the U.S. But upwards of 6 million customers are opting to cut the cord each year and the model is stuck in a free fall. Unless WarnerMedia-Discovery suddenly grows wings, it’s unclear how much longer their attachments to legacy media will be able to return significant value.

It’s not all doom-and-gloom though. Discovery can provide WarnerMedia with a larger sphere of influence overseas with channels in Australia and New Zealand (HBO Max plans to roll out in international markets this summer.) On the sports broadcasting front, combining Turner Sports with Discovery’s Eurosport has the potential to be a dominant force in the industry. As we’ve seen in recent years, sports broadcasting rights are among the most valuable assets in the TV ecosystem.

But what happens with the new company’s streaming efforts? Discovery+, which launched in January, has accrued more than 13 million subscribers thus far and Discovery has upwards of 15 million D2C subscribers overall. HBO Max (which launched one year ago) and HBO have a combined 64 million subscribers globally. Do Discovery+ and HBO Max suddenly become a dual bundle? The grouping of seemingly disparate streaming platforms has worked wonders for Disney, which attributes much of its growth to its Disney+, Hulu and ESPN+ bundle. Or, does the newly merged company merge both of its streaming services to form one major generalist platform à la Netflix? Will the new WarnerMedia-Discovery entity keep users within its streaming ecosystem with a bridge between Game of Thrones and Flip or Flop?

It’s already been announced that HBO Max will roll out an ad-supported tier this summer, rumored to be priced at $9.99 per month. Discovery+ already offers two AVOD options at $4.99 and $6.99 per month. It remains to be seen how the separate streaming services will be handled moving forward. But together, in whatever form it does take, it stands a better chance at edging its way into the final three-to-five SVOD platforms left standing.

WarnerMedia-Discovery’s new leadership is a shake-up

It has been reported by multiple outlets that Discovery CEO David Zaslav will run the combined company as CEO while Jason Kilar, who has only been WarnerMedia CEO for one year, will lead the company’s direct-to-consumer push. Even if the goal is to give Kilar a more focused empire to rule, it’s hard not to see this as something of a demotion. The pandemic expedited Hollywood’s transition to streaming, transforming direct-to-consumer business into the most vital operation.

Yet Zaslav, who maintains strong relations with CNN head Jeff Zucker and Liberty Media’s John Malone (the largest shareholder in Discovery Communications) suddenly finds himself at the head of one of the largest entertainment media empires in the world. Meanwhile, Kilar loses control over theatrical and network business.

UPDATE 12:48pm: According to the New York Times, Jason Kilar is negotiating his exit from WarnerMedia. 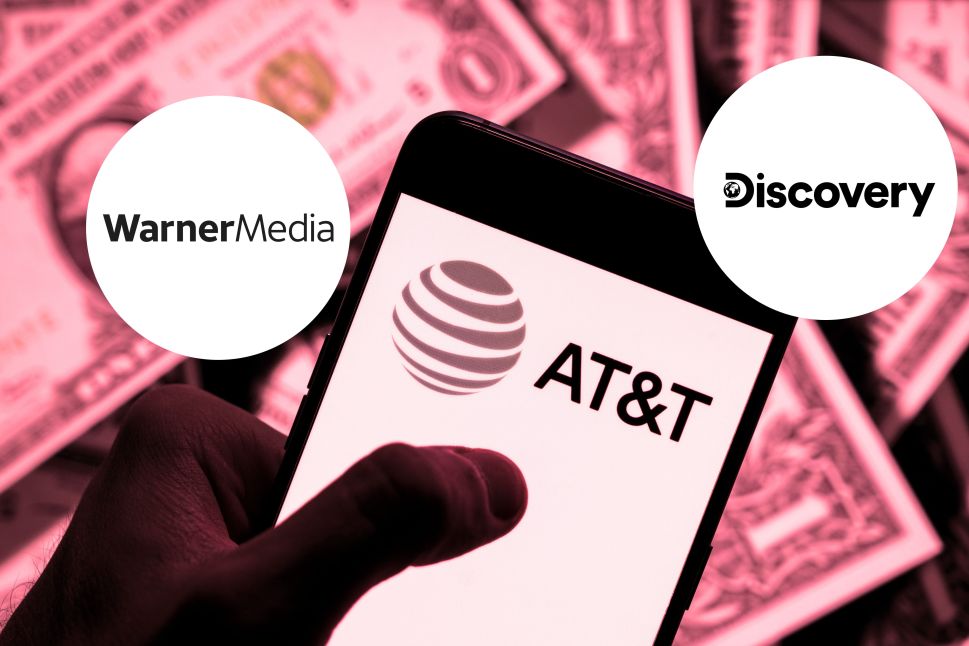