If Instagram has become the world’s stage, then Avocado Ibuprofen is a cult comedy. The equally poignant and caustic Instagram account and digital comic created by Finnish artist and writer Jaakko Pallasvuo has become a destination for Instagram users searching for a touch of reality on the performative platform. Unpretentious, witty, and often ironic, the artist uses their comic strips to make light, and dark, of how futile life on the internet has become in light of a rapidly commodifying visual culture and unsustainable world order. Throughout the digital comic, pixelated scribbly forms prefigure the social media platform while nameless first-person accounts wax poetic on the realities of being a 21st century artist in an increasingly net-based and profit-centered arena on the very platform the comic critiques. The comics are relatable for many a millennial that has regrettably witnessed social media become a glorified and surveillant manifestation of a virtual shopping mall. “I’m resigning to this platform,” says the artist to Observer from their home in Helsinki where they have been studying writing at the University of the Arts Helsinki. “This is not an artistic triumph… This shouldn’t be the pinnacle of our existence on this Earth.”

While Pallasvuo may be best known for their video work, Avocado Ibuprofen is by far the most viral of their works, with the Instagram account amassing close to 75,400 followers at the time of publication, nearly tripling its following in the past year. Beginning in 2017, Pallasvuo began to share these comics to Instagram once the platform made it possible to include multiple images in a singular post. This would become an ingenious format for the digital comics whose first-person narratives mimic a stream of consciousness, each swipe spiraling closer to a deferred reality. Today, the digital comics, which are illustrated on MS Paint, have only further eclipsed legible representation, as the most recent comic strips’ hasty lines and simplified composition can be best described as gestural. Despite this, Avocado Ibuprofen has found a growing audience that identifies with both this haphazard visual aesthetic and simultaneously unfiltered and world-weary voice. Instagram serves as a perfect home to these sentiments, balancing recognition of doomed global capitalism and shared millennial anxieties surrounding personhood and self-determination, while unable to divest from the very platform that fuels these anxieties.

“We’re like living in this global disaster while people are just posting about bread and dogs and exercise and how much fun they’re having,” the artist muses, referring to the performative nature of social media. “I feel like we would all be better off, and more mentally healthy, if we decided that social media was fiction.” And as a surprise to many, Avocado Ibuprofen is a work of fiction. Pallasvuo, who draws from their own study of narrative fiction in writing the comics, shares that though a sizable portion of their audience understands the comics as autobiography, they’d more aptly describe their comic strips as works of auto fiction. This “space of fiction” allows Avocado Ibuprofen to extrapolate on the real, performing the “thin layer of life” that Instagram represents. Avocado Ibuprofen is, “just the things that people want to be perceived about them or something.”

The account’s loyal followers are unusually vulnerable, sharing gratitude for the comics’ relatability under each post. “Do I really think you’re a genius or that’s a result of my narcissism because I see myself so much in your writing? Probably both,” one commenter writes, while another shares that, “you crystallize what I/we grapple with but could not put into words… It is indispensable to remember that I am not alone in these weird cultural struggles, makes me feel like I’m going a little less insane, seriously, thank you.” These comments consistently refer to a “you” that is assumably intended for Pallasvuo, though there is no indication that the comics are a reflection of the artist’s personal life aside from their being posted on the personal blogging platform. Sometimes fiction invites truth.

Still, Avocado Ibuprofen’s success is ironic. Though the comics appear spontaneous or hastily made, they are “intentional gestures.” That the non sequitur, nostalgic pixel art comic bodes well with the sorting algorithm that it takes issue with, even more mystifying. The more critical posts tend to garner the most enthusiastic response. The artist believes the account’s success has to do with reflexivity. “Critique requires some kind of complicity,” they say.

Most often the artist pens narratives from the point of view of a content creator or artist, critiquing how creators’ personhood becomes fixed as branded identity, while creative labor is exploited and ultimately commodified under capitalist systems in the art world and online. A November 2020 comic reads, “the whole thing [being a content creator] is actually completely fucked.. why am i making this stuff [content] for free for people who then criticize it and expect me to also be available to respond to comments.. and all this activity only makes Instagram or some other shit company money.. or something? It’s insane that all of culture is now ad-based!!!!” This comic ends with the narrator relenting to create more content once the angel, the narrator’s audience, has left the scene––drafting a post that mocks fans of Emily in Paris.

A more recent comic chronicles how the role of the artist and the influencer is beginning to merge, as art increasingly moves through the world as product and/or (crypto) currency; a fair assessment, in light of the cult of personalities curators and artists have come to adopt. A comic strip posted in late April, discusses existentialism, the “cringe” that comes with existing, and identity being too narrow or “fixed.” A figure that resembles the AOL Yellow Running Man antagonizes another blob-like figure, who wishes to cease maintaining an identifiable persona or character, with chirpy and seemingly well-reasoned responses against the faded backdrop of the almost blue comic. The artist conveys, with crude and endearing marks, how more than cynicism, awareness of such disorder, of such unconsenting chaos, results in the task of living through a doomed present that, like the comics, often provides no closure. While I don’t anticipate Avocado Ibuprofen going anywhere soon, Pallasvuo shares that they one day expect to grow tired of the project, and delete it.

So true, Jaakko. May you be freed from your residency on this virtual stage. 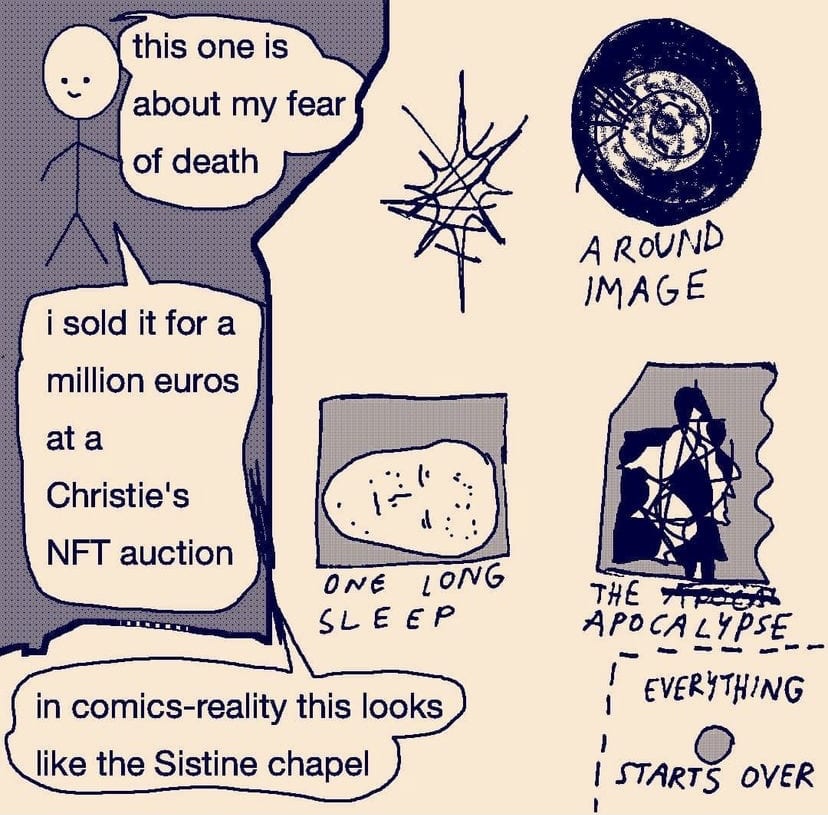