If the rubric for film criticism is honest observation and evaluation, than let us not stand on ceremony regarding Disney’s live-action reimaginings of its classic animated tales. From 2010’s Alice in Wonderland through 2019’s The Lion King, the mouse house’s output in this homegrown division has ranged from mildly entertaining to bland literal translations to soulless cash grabs. But amid a flood of averageness built upon weaponized nostalgia and repackaged consumer fervor, Cruella actually manages to conjure up real distinction as an origin story for the famous villainess.

Due out in both theaters and Disney+ Premier Access (which carries an extra $30 charge) on May 28, Cruella is a slightly more mature, slightly darker Disney tale than its predecessors. Emma Stone, effervescent as she chews scenery in enjoyably exaggerated excess, plays Estella/Cruella as someone who goes from wanting to climb the ladder of the cutthroat fashion world to knocking it over and letting anyone above her plummet all the way down. The movie is messy yet scrumptious, unwieldy yet vibrant. Its plot is all over the place but the sum of its excellently executed parts amounts to a whole that feels like a turning point for Disney.

The film, as current Hollywood strategy dictates, explores the rebellious early days of Cruella de Vil. Set in 1970s London amidst the punk rock revolution, it follows a young grifter named Estella, a clever and talented scammer with dreams of the luxurious fashion world dancing across her starry eyes. She befriends a pair of young thieves and together they are able to build a life for themselves on the London streets as a tight-knit pickpocket team of con artists.

One day, Estella’s fashionable creativity catches the eye of the Baroness von Hellman (Emma Thompson), a fashion legend who is devastatingly chic and terrifyingly unhinged underneath her exquisitely curated exterior. But their relationship sets in motion a course of events and revelations that will cause Estella to embrace her wicked side and become the raucous, fashionable and revenge-bent Cruella.

If you couldn’t tell by that extended plot synopsis, Cruella is a bit overstuffed and overly long at two hours and 14 minutes. The film begins as an origin story, segues into childhood connections that last through adulthood, suddenly takes up space with the stop-and-start momentum of her career ambitions, before finally settling into its true identity of a revenge thriller. Finally getting there feels a bit like Ikea furniture assembly over the film’s first half. With an endless array of needle drops encompassing seemingly every hit pop song from the 1960s and ’70s, the movie can also overly rely on stylization. But the success of each talented department gives Cruella genuine distinction as a blend of The Devil Wears Prada and a PG Harley Quinn.

Craig Gillespie (I, Tonya) directs with a fluid hustle-and-bustle energy that feels buoyant when compared to the languid ease of The Lion King (2019) or Beauty and the Beast (2017). The script, which counts Tony McNamara (The Favourite, The Great) among its credits, is really about a young woman breaking bad and becoming the worm that gorges on the rotten core. It’s a far tumble from the boring hero’s journeys we’re used to. Tatiana S. Riegel (I, Tonya) edits with an enjoyably pithy punk rock attitude that perfectly syncs with Fiona Crombie’s (The Favourite) lurid production design and Jenny Beavan’s (Mad Max: Fury Road) gorgeous costuming. Showmanship absolutely garners bonus points here as does the film’s creatively humorous use of Good Boy™ dogs.

Like a meticulously built Super Bowl-winning roster, the creative team behind Cruella has few visible weak spots. It’s the first time in the last decade that one of Disney’s reimaginings feels fresh and exciting.

Cruella may stretch itself thin with a jumbled list of priorities, but it’s rarely ever dull. Stone and Thompson are having a ball hamming it up as the rivalrous established incumbent and hotshot upstart in the fashion industry, doggedly attempting to one-up one another. Less cat-and-mouse and more snake-and-mongoose. There remains a question of who, exactly, this movie is for. It isn’t quite as sanitized as, say, Dumbo (2017) or Aladdin (2019), but also doesn’t flee Disney’s family friendly modus operandi. Regardless, before the box office totals begin rolling in, Disney should be content with the fact that Cruella is its most distinctive and fully realized reimagining. 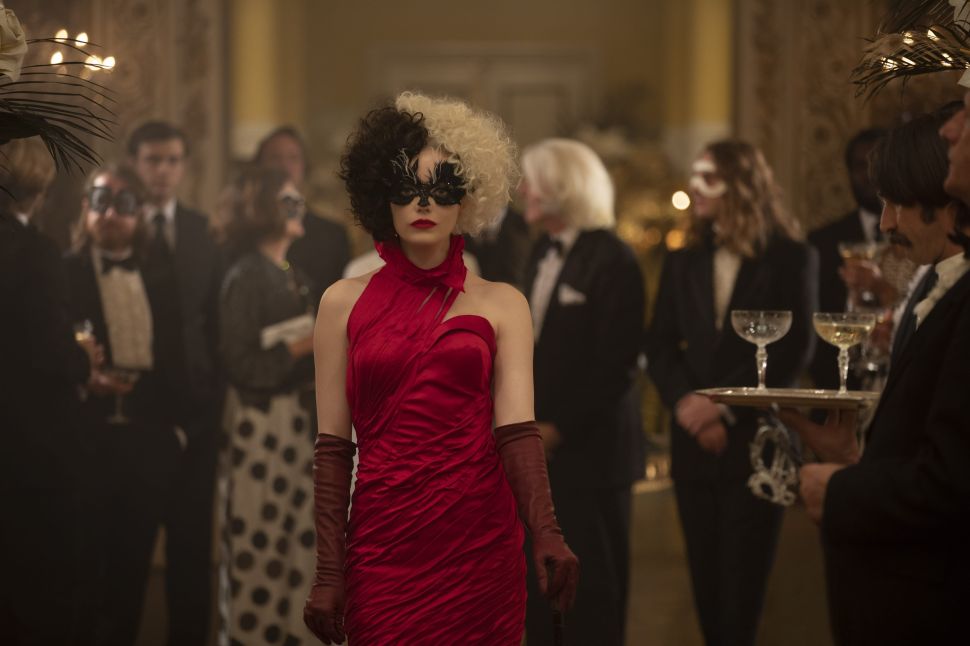