When Disney announced its new Cruella film, critics and fans recoiled as if they’d smelled the gross green smoke that drifted from the title character’s long cigarette holder in the classic 1961 cartoon One Hundred and One Dalmatians. It’s one thing to rehabilitate a wicked witch who curses an infant. But Cruella wanted to murder puppies in order to make them into a fur coat. As the John Wick films make clear, killing large numbers of people on film is good fun—people are vicious and nasty and annoying and generally (narratively at least) deserve to die. Puppies are innocent and wholesome, though. Coming for them is unforgivable.

Director Craig Gillespie and writers Dana Fox and Tony McNamara are canny enough to stay away from puppy killing; no Dalmatians die in Cruella. The creators also, though, understand that One Hundred and One Dalmations didn’t just hate Cruella for her fur coat fetish. The core of Cruella’s evil in that film isn’t what she does, but who she is: a single woman who plots to break up a happy family. She’s a bent bone in the throat of straight domesticity. And a villain who’s a villain because she is queer is a story that’s ripe for recuperation—even if Disney isn’t quite willing to fully commit to repudiating its own hetero default.

Cruella has no husband and no children. She’s a caricature of women who reject motherhood and childbirth as she plots to murder puppies for her own selfish luxury.

Cruella is probably the most memorable part of One Hundred and One Dalmatians, with her vividly divided black and white hair and Betty Lou Gerson’s vocals dripping with bile, greed and twisted sensuality. She’s so striking that you can forget that she isn’t onscreen that much. The bulk of the original film is devoted to the Dalmatians, Pongo and Perdita, who serve as charismatic mascots for heterosexuality and fertility. Pongo maneuvers his human “pet”, Roger, into meeting and marrying Perdita’s pet Anita. Then the cohabiting Dalmatians have 15 puppies (joined by another 84 adoptees).

Cruella is the grotesque antagonist because she wants to kill the dogs. But more broadly she’s the villain because she is anti-family. Drawn in elaborate towering gowns which suggest the look of an opulent drag queen, Cruella has no husband and no children. She’s a caricature of women who reject motherhood and childbirth as she plots to murder puppies for her own selfish luxury.

The film Cruella, with Emma Stone in the title role, embraces the character’s anti-domestic queerness. Placed in a boarding school by her single mother, young Estella gets in unfeminine fights in part because of her ingrown, outré fashion sense: Her hair is half black and half a shocking white.

Set in the punk rock milieu of 1970s London, the movie is certainly aware of its LGBTQ+ not-very-subtext. One of Cruella’s allies is Artie, a cross-dressing fashion genius, played by gay actor Jon McCrea. Artie is the first openly gay character in a Disney film. Cruella’s belief that she disappointed her mom by being too weird and bad also nods to the queer experience. So does her creation of an intentional family; alone, orphaned, and on the streets of London, she forms a bond with two other homeless children, Jasper (Joel Fry) and Horace (Paul Walter Hauser). They become her lifelong collaborators in thievery and friendship.

The movie also plays with the idea of the closet, and of queer and trans rediscovery of the self. Emma Stone is obviously having a marvelous time as she switches between meek, hang-dog Clark Kent Estella with glasses and stoop, and the fabulous Cruella, all dramatic structured shoulders, immaculate tailoring, and stunning bon mots—“born brilliant, born bad, and a little bit mad.” Estella tries to be normal, wearing a red wig to hide the black-and-white provocation on her head. But eventually she has to let her freak flag fly.

Cruella as maligned queer icon, strutting down the runway in a (very) fake fur coat, is a lovely reversal. Unfortunately this is still Disney, and the filmmakers do not back up their queer signaling with queer content. The story would work better in any number of ways if they were willing to make the character actually trans, but of course they aren’t. Nor are they willing to pursue the hints in the original film of lesbian attraction between Cruella and Anita (here played by Kirby Howell-Baptiste). Instead, the film tosses in a half-hearted attraction between Estella and Jasper in order to establish her normality. And when Cruella is more interested in pursuing fashion than the man, both Jasper and the film treat it as a betrayal.

Emma Thompson is marvelously malevolent as narcissistic fashion designer Baroness von Hellman. But the marvelousness is in the service of a caricature precisely in the mode of One Hundred and One Dalmatians’ Cruella. The Baroness is ruthless because women in business need to be absolutely unfeeling if they don’t want to be left with “a drawer full of unseen genius and a heart full of bitterness.” Her monstrosity is cemented when we learn that she’s a callous and even murderous mother.

Cruella’s queer chosen family should rebuke the stifling conformity of heterosexuality and patriarchy. But instead evil is embodied in another woman who is coded as a dangerous threat to natural maternal feeling. The movie, almost impossibly, redeems its title character. It does so by showing that she was condemned not for puppy-antipathy, but for being a queer woman with a dramatic fashion sense. And then it turns around and creates a villain who you’re supposed to loathe because she’s a queer woman with a dramatic fashion sense.

Disney can imagine that a (very sanitized) version of non-normative gender presentation might be liberating and positive. But it’s not quite willing to acknowledge the ways in which normative domesticity can be oppressive rather than adorable.

Even in a movie where she threatens no puppies, even in the movie that celebrates her, you can still hear Disney humming that song in the background about making family great again: “The world was such / A wholesome place until / Cruella, Cruella de Vil.” 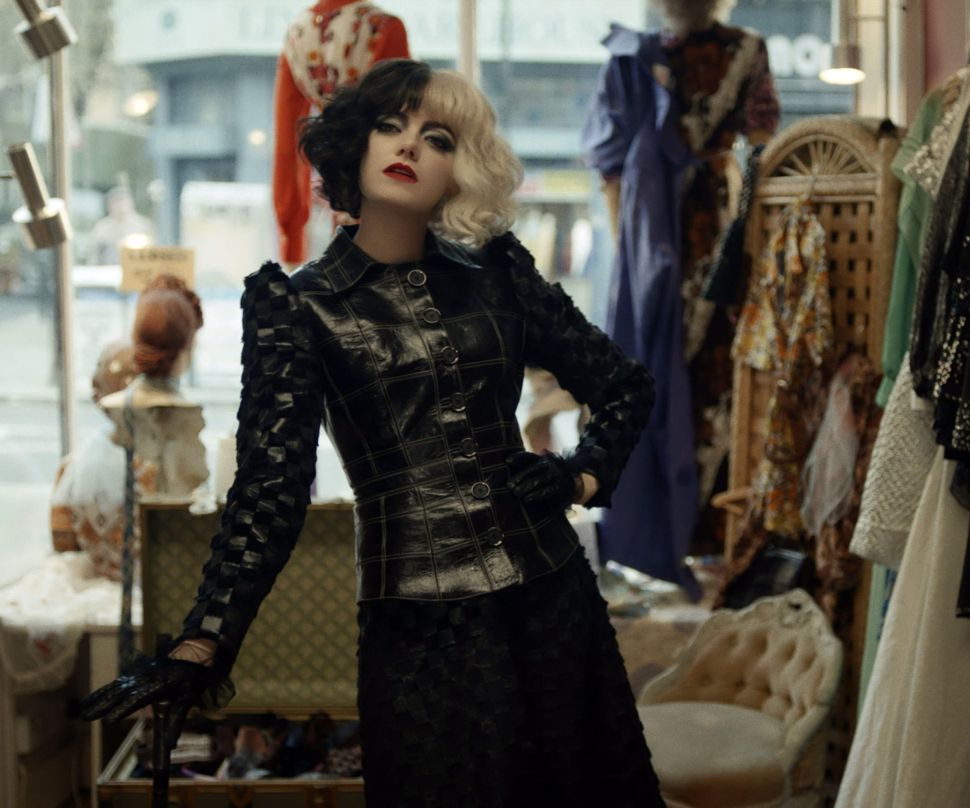