Even as COVID-19 eats into Disney’s coffers, its streaming franchise dominance pushes the company to new heights. Marvel/Disney+

After the bell rings on Wall Street Thursday afternoon, The Walt Disney Company will report its Q2 earnings for the year. While the pandemic is still pinching its major divisions such as parks and resorts and theatrical, its direct-to-consumer business has pushed the Mouse’s stock to all-time highs. How has streaming single-handedly kept the company not only afloat, but thriving, amid the worst economic conditions Disney has ever faced? A good question—let’s see if we can’t answer it.

Parrot Analytics sifts through social media, fan ratings and piracy data to represent audience demand, which reflects the desire and engagement expressed for a title within a market. While that can sometimes skew the data in favor of a title on a platform with a significantly smaller reach than its rivals but with vocal online fans, it does help to quantify the intangible buzz element of a series.

Disney, the box office king of the last decade, has proven its ability to produce zeitgeist capturing franchise successes. With the launch of Disney+, the company has translated that to the small screen.

The share of demand for Disney+ has primarily been driven by the massive amount of audience attention shows such as The Mandalorian, WandaVision and The Falcon and the Winter Soldier attract. Q1 was a success for Disney+ originals, with the platform holding 3 of the 10 most in-demand digital originals in the USA. 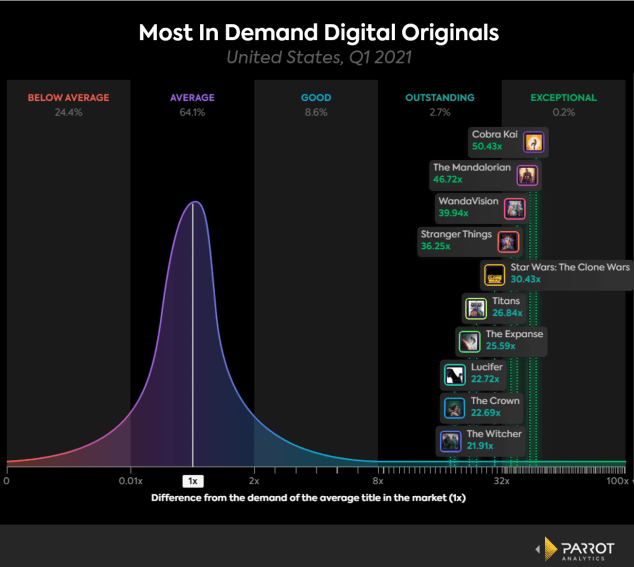 Most in demand digital originals over Q1 in the U.S. Parrot Analytics

Q1 was a big success for Disney+ with the launch of its new small screen Marvel empire, but demand indictors point to Q2 being an even stronger quarter. Half of the 10 most in-demand original series in the second quarter so far are from Disney+ or Hulu, per Parrot Analytics.

Meanwhile, the return of The Handmaid’s Tale this quarter should give a bump to Hulu’s audience demand share. The quarter is not yet over either. Star Wars: The Bad Batch, which debuted on May 4 and will run for 16 episodes, is still growing in demand and the highly anticipated Loki is due to be released in June. It won’t be surprising to see the Tom Hiddelston-led Marvel miniseries outperforms both of its Disney+ predecessors. The growing dominance of Star Wars and Marvel series should boost Disney+’s appeal for new and existing subscribers alike. 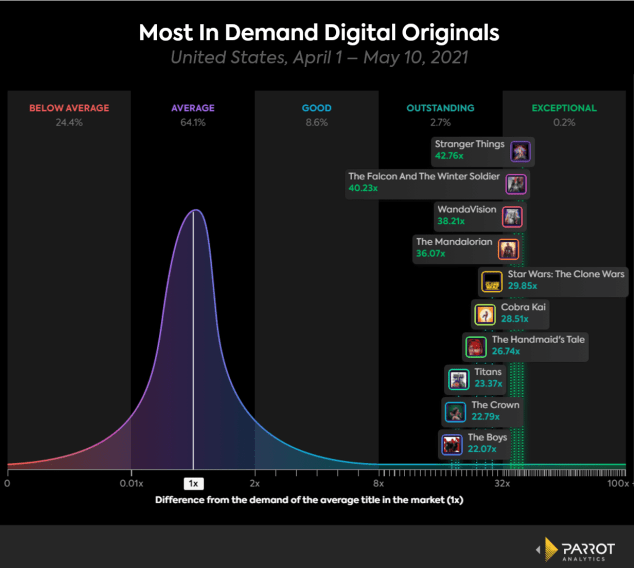 Most in demand digital originals since April 1 in the U.S. Parrot Analytics

Over four episodes (ranging from 42-60 minutes) tracked by Nielsen thus far, The Falcon and the Winter Soldier has produced nearly 2.5 billion minutes-watched for a weekly average of 625 million. As Nielsen data arrives four weeks delayed from the week it examines, we’ll have to wait to see how The Handmaid’s Tale‘s Season 4 premiere performed for Hulu. But it’s a strong bet that it will land in the Top 10 SVOD originals.

Disney+’s brand is built on four quadrant franchise power. Unique among the major streamers is Disney’s ability to keep a viewer locked within its ecosystem over the course of multiple programming selections. The platform leverages the power of its own original hits and the appeal of its blockbuster franchises to boost demand for its broader catalog.

Season 2 of The Mandalorian actively created crossover opportunities with other series in the Star Wars universe. A fan favorite animated character, Ahsoka Tano (Rosario Dawson), made her live-action debut in Chapter 13 “The Jedi” and caused demand to surge for both The Mandalorian and Star Wars: The Clone Wars, where she was originally introduced. Moreover, this character has her own spinoff series planned, showing that Disney only intends to further strengthen the connections between its shows in the Star Wars universe. 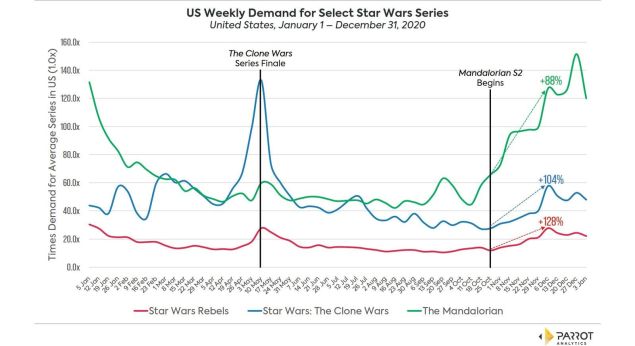 The interconnected Marvel universe will continue deploying this tactic as well. The events of WandaVision will lead directly into Doctor Strange in the Multiverse of Madness with Elizabeth Olsen reprising her role. Teyonah Parris’ Monica Rambeau, introduced in WandaVision, will next appear in The Marvels, alongside Brie Larson’s Carol Danvers and Iman Vellani’s Kamala Khan, who will be introduced in Ms. Marvel. Mark Ruffalo’s Bruce Banner will appear in the legal dramedy She-Hulk. It all creates a vortex of cross-pollinating programming that drives viewers from one project to the next in the sprawling episodic MCU franchise.

Disney’s revenue will undoubtedly still be in the dumps with limited capacity restrictions still kneecapping parks, resorts and moviegoing. But the company’s overwhelmingly powerful streaming dominance will be music to Wall Street’s ears. As the company prepares to release an avalanche of Marvel and Star Wars Disney+ programming in the coming years, the SVOD outlook only looks rosier.