Film adaptations of stage musicals walk a tricky line of having to both condense the story into the length of a feature, while also translating a stage production into a cinematic experience. Many get lost in the grand spectacle and forget to actually adapt the text, but that’s not the case with In the Heights, a film that doubles down on the commentary from the original amid all the catchy and breathtaking musical numbers to create the first truly must-see cinematic experience of the summer.

In the Heights follows the life and dreams of the residents of the Washington Heights neighborhood in New York City. The story focuses on Usnavi de la Vega (Anthony Ramos), owner of a small bodega, as he spends his days dreaming of leaving the Big Apple behind and moving back to the Dominican Republic to rebuild his parents’ business by a beach while the neighborhood changes around him.

Director Jon M. Chu adapts Lin-Manuel Miranda’s first Broadway sensation by diving into the play’s themes about dreams and infusing the film itself with dream-like magical realism. The editing dances along to the rhythm of the music numbers, with the song lyrics brought to life via visual effects. In one scene Vanessa (Melissa Barrera) sings about wanting to move downtown and design clothes as giant fabrics of all textures and colors cover the barrio, and in another Chu pulls off a gravity-defying, one-take musical number where two characters start dancing on the side of a building. The opening number ends with a shot of Usnavi looking from inside his bodega, trapped in his own world and his own dreams while the outside world is literally dancing outside his window.

Quiara Alegría Hudes adapts her own book for In the Heights and expands on its rather bland plot by adding some commentary adobo to the film’s script. There is a bigger emphasis on contextualizing certain characters’ motivations and struggles with what it means to be a part of the Latinx community and the pressure of inheriting your parents’ dreams and hopes, along with their expectations. Indeed, even as we quickly learn of every character’s dreams, the movie asks if the dreams we see are really theirs, or just projections from other people, and even the true meaning of the American dream. The older characters constantly talk of Latin America and the wish to return to it, or at least to an idea of it, as they wonder if all their struggles in the United States have really been worth it.

Not all of it is good, however, as the film’s approach to social commentary can come off really corny at times. Some of the characters’ subplots feel like they’re trying to shoehorn in a timely message, as the script doesn’t give enough nuance to them and they end up distracting from the main story. Likewise, for a film that’s such a celebration of Latinidad, community and Washington Heights, it does feel disappointing that In the Heights lacks proper representation of the diversity of the Latinx diaspora. Unlike the real Washington Heights, the film’s cast is primarily light-skinned, with Black Latinx actors being mostly relegated to background dancers, despite the film’s music borrowing so much from Black culture. For a film that makes such a big deal about representation, it comes up short.

If there is one standout performance, it is Olga Merediz as Abuela Claudia. Merediz perfectly encapsulates the Latina matriarch, as she carries the weight of her community, trying to impart hopes and dreams on the new generation, teaching them about Latin America, even as she herself wonders whether her parents’ sacrifices have been worth it. Her show-stopping song, “Paciencia y Fe” is the definitive standout in the film, a song about the many hardships immigrants face when entering the U.S., while the choreography and cinematography evoke classic Hollywood, but the characters are played by Black and Latinx actors, showing us the faces of those who paved the way for many of us with their own paciencia y fe. It may be a bit soon to talk about awards season, but keep Merediz’ name in mind, because you’ll hear it a lot very soon.

Make no mistake, this is a musical turned into a blockbuster, as Chu treats the wide shots of the dozens of background dancers with the same eye you could see Christopher Nolan apply to Tenet, or the Russo brothers apply to Endgame. There is a feeling of melancholia beneath the upbeat lyrics and the relentless optimism of the characters that comes to the surface at several points in the film, a recognition that things fade, neighborhoods change and people leave, but we might as well throw a huge party before that happens. In the Heights is that party, and we are just lucky to be invited. 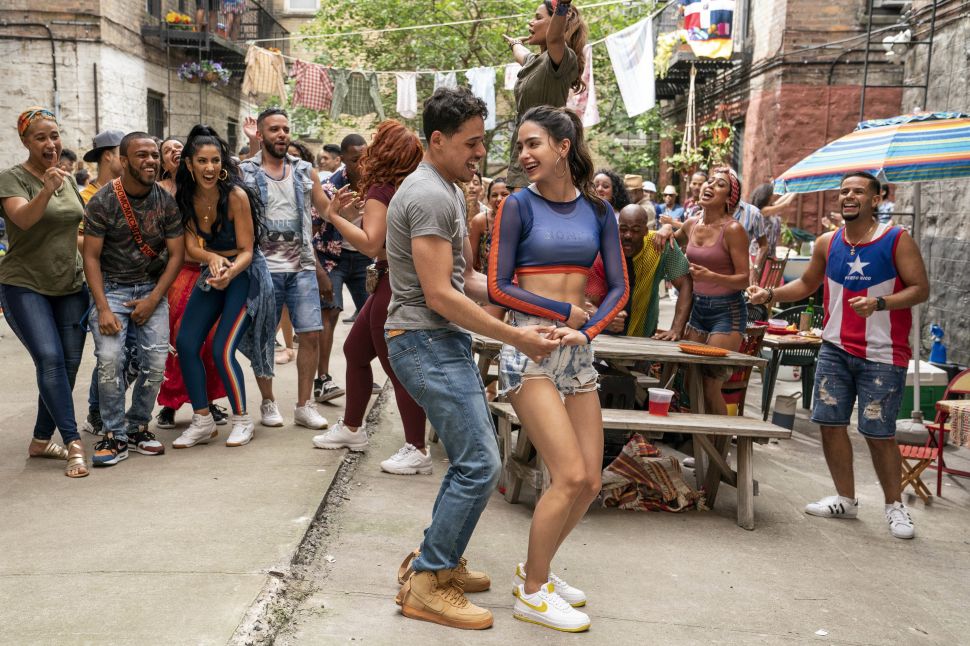