Ivy Haldeman’s paintings are filled with imagery that grows more complex the longer you look at them. In the artist’s latest exhibition “Twice” at Downs & Ross located in Chinatown, Haldeman explores a variety of topics through several recurring characters that have become a staple within her work ––a feminized hot dog woman, hot dogs in general, power suits, disembodied limbs, and more. This latest series mimics a psychic trip through Haldeman’s mind.

When you first enter the gallery you encounter a larger painting that is a close up of one hand that is arched with an index finger stretched over the middle one. The sherbet and blood orange tones of Hand, Sitting, Index Crossed Over Middle, give depth to what the hand is doing in its almost seductive pose. The disembodied hand is graphically well executed and is comical in both the color of it and the gesture it is making. This sets a tone for the show and also is emblematic of what Haldeman’s work is all about.

Haldeman’s canvases emit a feeling of nostalgia––the images feel familiar and are like things you have seen before but have been subverted and manipulated through the absurdly funny and sometimes odd scenarios she has created. In Twice Colossus, Head Leans Left, Pinky Up, Head Leans Right (Gaze), two hot dog people are depicted in deep conversation with one another only a few inches apart. The buttercream glow of the bun gives way to the face of one hot dog person with long, sumptuous eyelashes and small lips with their head propped up on her hand as she gazes at her counterpart. The buns become pillow-like and function as a bed. But given the nature of what they are –hotdogs and buns after all– they are also phallic in shape and yet they still exist within and beyond the bounds of their hot dogness. A painterly Freudian slip if you will. It is this kind of slippage that occurs over and over again in Haldeman’s work and what adds to its complexity.

The fluffy bun envelopes Haldeman’s hot dog protagonists and gives them a place to rest and create space. They relax in bun and have an intimate exchange with another hot dog person, and play with hand gestures in another.  Throughout the series of paintings, it feels like we are being introduced to another side of this subject matter and this is what makes this motif so intriguing.

Within Full Figure, Head Leans on Bun Edge, Leg Akimbo, Bottom Enfolded, the hot dog is depicted leisurely lying about in their bun. She is contouring the upper half of her body resting on the bun while one leg dangles over the side. At the very end of her bun the tail of the hot dog body peeks out. It is exposed and the detail of the recognizable marks of that part of the meat has been painted in. In the very front of the bun is one lone stiletto heel that is on its side and is signaling to the viewer that something just happened. The bun becomes a couch, or maybe a love seat or a chaise lounge, and if it weren’t for the hot dog part this could be any person after a long day of work or a night on the town. There is a palatable feeling of familiarity in what this painting depicts, it is one of my favorites in the exhibition because it captures everything Haldeman is about––the absurd normality of the everyday.

The graphic style line work of Haldeman’s work is reminiscent of ads from the 1950s. There is a muted vibrancy to the color pallet Haldeman uses that seems to jump off the canvas. There are sherbert oranges, egg shell and buttercream yellows and whites, and cool-grey almost periwinkle purples that become animated in her approach to shadows and her line rendering. The canvases’ color palettes in my mind bear a slight resemblance to the obscure 1957 film The Umbrellas of Cherbourg while also maintaining the retro feel Haldeman is trying to capture.

In a recent interview Haldeman recounted how she first became interested in the character of the hot dog. In 2011, while on a trip to Buenos Aires, Haldeman came across a hand painted sign for a deli that featured a hot dog. She sketched it then moved onto other things. Several years later while flipping through her old drawings some time later she became enamored with it again. From there the hot dog people began to leap off the pages of Haldeman’s sketchbook and onto her canvas.

In Haldeman’s case, and in the case of psychoanalysis, a hot dog is never a hot dog. The hot dog becomes a stand-in for something else whether it be a penis, desire, a cigar, a finger, and it is a way for Haldeman to further parse her larger conceptual project.

Painted over the course of 2021, Haldeman’s exploration of the hot dog people and power suits occur in new and interesting ways through intimate interactions; many of which positions them in direct opposition to what many people experienced over the course of the last 14-months. The power suits in particular are of interest. Devoid of actual bodies, the suits become activated through the silhouettes of clothing that they inhibit, a kind of ghost body if you will. There are no legs or arms––only torsos of women’s bodies. While Haldeman’s rendering of these female forms doesn’t feel violent, the absence of a figure is interesting and calls into question how the body is meant to function in these works, or rather the parts of bodies. They are blown up and become the entire focus of the canvas.

This push and pull between gender norms, dress codes, fashion, and power is evident in this series. Two Suits, Step Forward, Point, Cuff Behind Back (Smalt, Blue), features two suits as the entire focal point of the painting. The foreground of the painting showcases a periwinkle suit that is turned with one sleeve gesturing up towards its side and is bent at the wrist. The other suit, a darker slate grey with blueish grey with periwinkle undertones stands behind it grounding the other suit hands behind its back. There is a tension within the movement each suit is creating and the pose they are in.

The power suits become a symbol for the female form but are still functioning within the parameters of what it was meant to be. The term which was coined in the 1980s became a way for women to assert themselves in the corporate sphere. The suits themselves came to be defined by big shoulder pads and sharp lines. If you trace the term out more, power dressing first emerged in the 1970s as a way to negotiate or assert power into fashion and therefore were worn in business scenarios. While the term has fallen out of popularity, the concept still remains.

The psychology of this larger cultural and fashion trend is evident in these works as well as the idea behind power poses. Striking a particular pose in theory can influence how you feel and behave, in line with this is the particularities of power dressing. To pose a certain way will emit a certain mood or tone which is emblematic of the suits. In Haldeman’s paintings the power suits become something more and create slippage between what the clothing represents, the color tone, and the larger social commentary that is occurring. It is a suit that is absent from the body but is activated through the pose it strikes and connections it makes.

There is an overall cultural pose that Haldeman is striking through these paintings. Absurdity, desire, and even psychoanalysis take up space in these works that might not seem apparent at first glance. Haldeman is carving out new space for concepts she has been working through and this most recent body of work is some of the most exciting to date. Details matter and it is what these paintings are calling attention to that give them their true power. 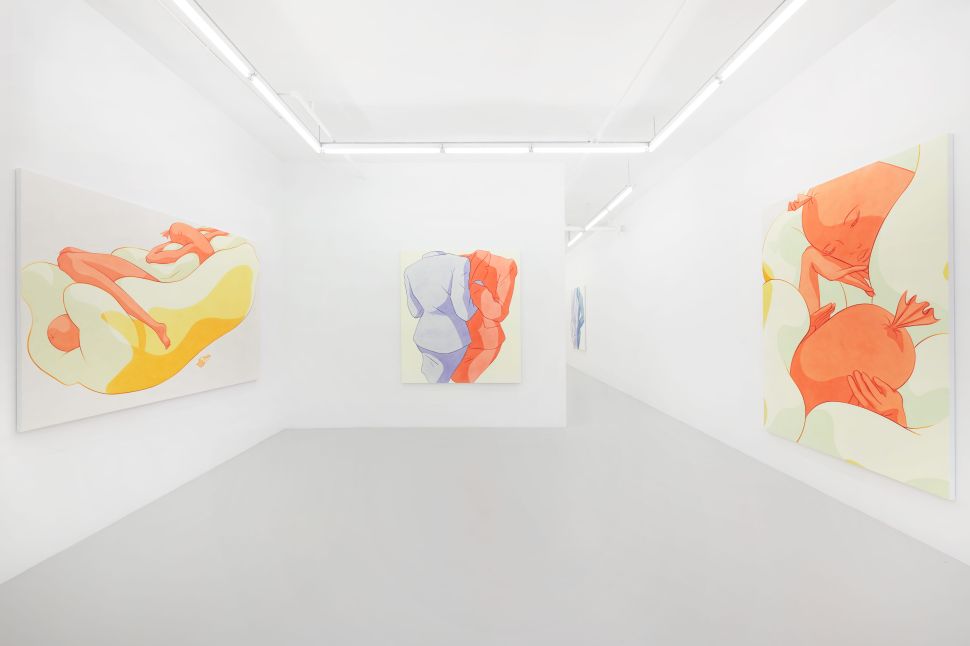