It’s tempting to view every new exhibition through the prism of the last year— to search for narrative threads that reflect the one big narrative of distance, disease, pain. This titanic trauma must have trickled down into every nook of canvas, one might think, its effects accreting, consciously or not, beneath every stroke of brush. It’s a knee-jerk desire for narrative clarity that I found whirring to life inside me as I stood before the works in Katherine Bradford’s latest show, “Mother Paintings,” on view at Canada Gallery until May 15th. “Surely those are face shields,” I thought, looking at the translucent geometry that hovers over the faces in Bus Stop; that must be the anxiety of a crowded room that’s paralyzed the colossus at the edge of the canvas in Guest for Dinner. There are paintings titled Fever and Unsettling Times, but more than that, there is a persistent motif of contact and care— fodder for my internal logic of this as Bradford’s COVID show.

But, while pandemia has surely informed the particularities of the septuagenarian painter’s practice, the reality is that the embrace of closeness in “Mother Paintings” is the latest step in a narrative pivot that has been years in the making. Bradford has spent much of the last half-decade moving away from the masculine midnight solipsism of her earlier work, with its massive ocean liners and depictions of lone superheroes, and towards a painting that is focused on the heroics of interpersonal care. The first hints of this new, more intimate figuration could be seen in the bright-hued group scenes that populated shows like 2016’s “Fear of Waves” and 2018’s “Friends and Strangers,” but with “Mother Paintings,” it seems that Bradford’s chrysalis is nearly complete: there is no solitude to be found here, no romantic loners adrift in impenetrable nocturnes, but rather groups of people gathered together, reaching out, consoling, carrying one another forward.

This sense of intimacy is felt immediately. Bradford conjures an atmosphere of closeness not through any specific detail— her figures are almost uniformly featureless— but rather through simple, spare gestures. From a mother’s caress in Bus Stop, to the tender placement of hand on forehead in Fever, to a quiet family moment courtesy of Mother’s Lap, interpersonal warmth is rendered through touch— a gesture that surfaced only fleetingly in Bradford’s earlier, more distanced work. The simple domestic scene Motherhood, one of the most powerful in the show, is disarming in its directness, in how much power seems to radiate from the simple act of gathering together on a couch. Whether inspired by social distancing or a meditation on the gendered obligations of the show’s titular, totemic Mother figure, it’s clear that the electric possibilities of skin on skin have fully animated Bradford’s practice

Focusing on narrative in a Bradford painting is, of course, at least partially missing the point. Her great skills as an artist are her bold, imposing mark-making and her understanding of color, both of which are on full display in the paintings here. Bradford has a way of building up layers of hues and brushstrokes so that her paintings seem to be constantly in flux, with half-finished forms floating ghostlike beneath subsequent layers of paint, as in Fear of Dark, or flecks of neon peeking out from a hide of dark scumbling, as in Guest for Dinner, where the dinner tables seem possessed of a deep-set, miraculous luminism.

Her work so often seems to occupy some intermediary plane, one where the bounds between beings and their surroundings are less than solid, and they can slip into and out of each other at a moment’s notice. That tendency is still present here— Bradford’s hand will always be her hand— but the figures in “Mother Paintings” seem to carry a greater sense of import than in some of her previous works. The families and friends and mothers on display here are large in the frame, dominating most of the picture plane. They are occasionally wobbly, or shot through with ambiguous extra limbs, but it’s clear that we are meant to focus on them, not ponder how they might dissolve away into Bradford’s endless, eddying field.

While she may have mostly abandoned the romantic solipsism of her earlier work, Bradford’s focus on the iconography of the powerful has not abated. There is a heroism to the works in “Mother Paintings,” visible in the load-bearing laps of Mother’s Lap and Fear of Dark, in the powerful reaching limbs of Motherhood and Fever, in the courageous figures of Fear of Dark that calmly apprehend the perforated darkness before them. The physical tax of caregiving is viscerally present in Bradford’s contorted forms: to care is to commit a feat of acrobatic and emotional prowess, her figures suggest, one that wracks the body, leaving it knotted, bent, blue as a corpse.

These formal qualities feed back into that great overarching narrative shift, the one I am tempted to attribute in part to quarantine, though I should probably know better. Over the past year, the word “hero” has often been deployed as a form of forced martyrdom against those compelled to continue their labor—whether wage, domestic, or otherwise— unabated and unaided by any social safety net. Conflating the heroic tenderness of these “Mother Paintings” with a pandemic that has broadly left many caretakers and women in the lurch feels suspect, a capitulation to a narrative handed down by those who can’t be bothered to commit to care taking themselves. Perhaps that’s the point of Bradford’s chosen titles for these works. Motherhood is monumental, and care is heroic— not just during hardship, but all the time. These are “Mother Paintings,” after all, not “Pandemic Paintings,” and the thing they canonize is care, not tragedy. Maybe, though, it’s best not to think about narrative at all— perhaps the point is to bask in Bradford’s undulating weft, to be drawn in by the luminous warmth that radiates from somewhere deep in her canvas. 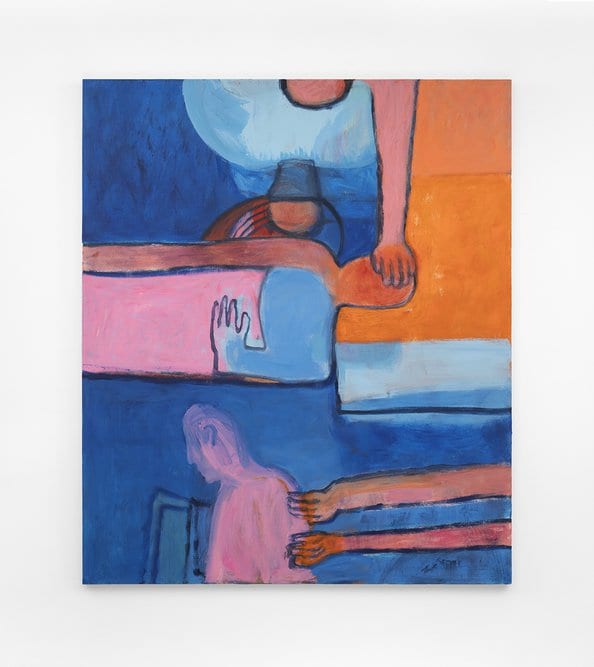