The highly-anticipated Pop Song, published by Catapult, is Larissa Pham’s first book of essays. As an established pop culture critic, Pham’s work has appeared in The Paris Review Daily, The Nation, and Guernica, among others. She also has a novella, Fantasian, published with Badlands in 2016. The essays of Pop Song follow Pham through early adulthood. Her observations span a lot of ground — night runs on Yale’s campus, a painting course in France, a residency in New Mexico, each place an astute rendering from a definitive voice. Her parents having left Vietnam for America, she writes, “a product of this political displacement, I’ve always been in this space of refiguring. I’ve never really had a home, only places I’ve lived.” In Taos, she finds “a platonic ideal of untouched Indigenous America was shilled, parceled out in silver jewelry and lumps of turquoise that, one seller quietly muttered to me, had actually come from China.” In Shanghai, with its “deep past and sleek futurity, Pham rides in “wood-paneled black cars” and landmarks like “the Pearl Tower, magenta pink and crystalline, as if covered in gemstone pavé.”

Her tone is steeped in millennialisms, with chapters occasionally beginning in sentence fragments (“Dinner at the bar at Largo”), but Pham tries neither to dismiss the context of her Internet upbringing nor to over explain it. She describes the particularities of her formative years online through anecdotes that are fittingly visual, and which evoke the phenomena of this milieu: seeing Nan Goldin’s photo Bruise multiplied and degraded in the tiles of a Tumblr background, posting “handwritten drafts on pink paper” of Sylvia Plath’s Ariel “at regular intervals, as though going to church.”  Tumblr pedagogy familiarized Pham with writing a version of herself for others, when “the dominant mode by which a young, hungry writer could enter the conversation was by deciding which of her traumas she wished to monetize.” Even moments offline are excruciatingly contemporary, like when she has sex under the spray of a Muji diffuser or when her friend writes on her arm “in highlighter: ‘BREAK UP WITH YOUR BOYFRIEND.’”

In one of her longer essays, “Body of Work,” Pham chronicles her relationship to pain, enlisting the works of those such as Jenny Saville and Maggie Nelson. Her careful attention to formalist description is coupled with poetic enthusiasm. Of Carravagio’s rotten fruit, she writes: “I could reach in with my finger, poke through the waxen skin to feel its insides, mealy and deliquescent.” We hear about the insouciant cruelty of exes, like the one who mocked her eating disorder when she tried to help him vomit (“you’d know about that, wouldn’t you”). Her research on the public acts of mortification performed by saints — like Lucy, who is painted holding her self-plucked eyes out on a plate — precedes a personal account of learning about BDSM precipitously, materially, and then, right after, as an “earnest academic.”

As we learn more about the relationship between Pham and the “you” to which the book is addressed, we are drawn into the writerly efforts of parsing relationships, especially one to the self. Essays like “Blue” and “Crush” are elegies for distances lost — the distance from a person or a place — which were powerful by way of fantasy, anticipation, and promise: “I see how desire could obliterate me; I stand watchfully at its edge.” Pham tries to make a relationship work, she tells us, by fitting “the conventions of genre.” The book itself began as a project in form. In essays like “What we say without saying,” there is a clawing sense that Pham might resent the language she is required to rely on. “It’s always seemed so unfair to me that I could write paragraphs and paragraphs and yet all that could be felled from a song.” Wishing she had been a musician, Pham admires Frank Ocean’s “Good Guy,” which “feels like a phone call,” both clipped and close.  She ascribes the song with “it,” a quality similar to Walter Benjamin’s aura, but which doesn’t degrade even in its reproduction. “I wish that it no ekphrasis. I hope it remains beyond writing.”  It is fitting, then, that Pham should often write in sentence fragments, a sort of entropic approach, or, paradoxically, in numbered stanzas, imposing clean order on the chaos of language. Sex in front of a phone camera, stilted and fumbling, is distilled into Pham’s experience of it: “Did he want to see my body where. And. Do what and.”

Interested most in the emotional pulses of art, “a strength of gesture,” Pham’s posture is one of acute sensitivity to the world; she is always describing colors to us (“adobe red, mud brown, bright blue”), or the way bougainvilleas have flowered (“a profusion of bright purple”; “a riot of fuchsia”). Her curiosity swells under the haze of alcohol, a twenty-something turning to the page with inflamed partiality. But wherever Pham looks, her gaze is ceaselessly empathetic, and it is this generosity that binds the reader to her quest for understanding: “How did the cilia know which way to move?” Her return to the metaphor of loops is somewhat apt, in that the book can feel repetitive at times. The abundance of artistic references is surely important to the book’s goal, but her criticism sometimes gets away from us in an overly sentimental lyricism. Nonetheless, the book emits kindness, and even with all the pain of heartbreak, violence and loss, Pham manages to generate sincere hopefulness. Near the end of the book, Pham watches from her hotel window the people all shaped by their umbrellas: “I felt, bathetically, a spike of warmth for every person in the world.” 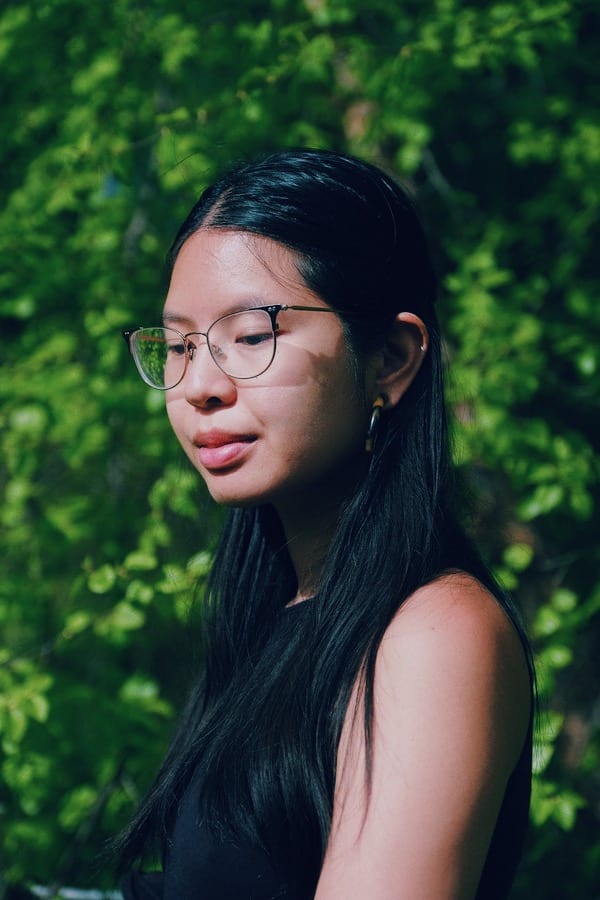