More than once during this ever-long pandemic spent glued to various screens I’ve been drawn to memories of my Sims gaming craze. I’d quickly run out of patience on the simoleons income side and would enter the motherlode cheat-code to give my Sims a glamorous life of endless material upgrades. I can’t remember the name of my Sim’s avatar but I jealously recall how perfect my acquired greenhouse was, thanks to the gardening expansion pack I once got for Christmas.

Stepping into Lu Yang’s “Doku: Digital Ayala,” her multimedia exhibition on show at the Jane Lombard Gallery in New York until June 19th, 2021, revives afternoons consumed in deafening amusement arcades and evening hours crouching over video games. Lu Yang is an award-winning Chinese artist who, in a seeming ode to the cyber-entertainment bubble, explores the convergence of immaterial worlds and the multifaceted interpretations of existence.

Building on her previous works, “Doku: Digital Ayala” (curated by Barbara Pollack) questions the reality of reality, the post-human and how seeped traditions of eschatology survive disenchantment, depersonalization and contemporary ennui leaning towards dissociation.

At first glance post-modernist, possibly even nihilistic, Doku appears as the artist’s familiar-unfamiliar avatar. Doku is an augmented projection, achieved through the collaborative efforts of CGI techniques, motion capture, 3D facial scanning (and tweaking) and other digital, surgical-like knife strokes. Under the influences of otaku, manga, cosplay, e-girl and anime subcultures, Doku physically resembles Lu Yang but not quite. Doku is gender-fluid and asexual, both male and female and neither. One is struck by Doku’s avoidant gaze to the camera and the lack of outward facial expression. They are neither happy or sad. Doku is a blank sheet—beyond good and evil.

In the various panels (light-boxes) and prismatic video animations, Doku inhabits congested, maximalist worlds of para-realities. Every realm reveals a touch of solitude and search for purpose. The color-coded stills are reminiscent of shrines, doomsday dystopian magazine covers or The Hunger Games’ Katniss Evergreen movie posters. They feature Doku and their spiky hair standing in various warrior poses.

Animal Realm #1 is a 3D installation tainted by red and fuchsia hues. The image shows Doku staring upward. Behind them is a gory abattoir scene and we guess that they are in a cold meat storage. Blood drips from the fresh carcasses to the floor.

By contrast, a green Heaven Realm #1 exudes halcyon days, abundance and plenty. A digital blue butterfly rests on Doku’s left hand (unless they captured it). Around them are luscious ferns and monstera vines populating a tropical jungle background.

Doku dances in short video clips. In one facilitated by a grant from a 2019 BMW Art Journey award which draws inspiration from Balinese culture, we see Japanese choreographer and dancer kEnkEn insufflating life to Doku’s androgynous body. Together their undulations are juxtaposed next to a fleshless robot in a sophisticated, upbeat three-way revival of Dance Dance Revolution. In this trinity, Doku is a hybrid of both robots and humans—a techno-alchemical vessel of flux and movement.

In another video DOKU – Hello World – Human, the avatar alternates size during her dance, becoming a giant in a trance-like, kinetic, cyberpunk aesthetic rendition of a video game. Doku occupies an empty, neon-filled Japanese city at night in a beaming costume which traces the outline of a modified, bionic circulatory system. Techno music accelerates tempo as if echoing tachycardiac heartbeats. Through the various artworks, the atmospherics of the sci-fi immersion mutate and what imperturbably remains is Doku, the digital, hyperrealist non-dual reincarnation of the artist.

Shanghai-based Lu Yang came of age at a time of great transformations. Her country opened to world trade, globalization and the Internet era which coincided with a paradoxical perception that the world expanded and shrank at the same time.

An avatar is an expression, a canvas neither intrinsically better or worse. Etymologically, avatar is derived from Sanskrit and combines the root words of descent and crossing over. In Vaishnavism, Hindu god Vishnu “descends” to human affairs, assuming multiple embodiments – from ten to many, many more.

There’s a significant layer of soteriological and spiritual meaning in Lu Yang’s work, and by extension, Doku’s quests. Doku’s name is short for Dokusho Dokushi which quotes a Buddhist scripture from the Great Vehicle tradition—the Infinite Life Sutra (Sukhāvatīvyūha Sūtra). It means “alone we are born, and alone we come into the world,” illustrating Doku’s solitude which may be wrongly assumed as solipsism. In this text, the Buddha speaks about the Pure Land (Sukhāvatī) attainable through exceptional merit. The sutra references a cosmological worldview with different realms of rebirth and transmigration.

When we first enter the exhibition, the light-box panels survey the six realms of existence according to this tradition—namely: human, hungry ghosts (with geological formations akin to dried lava flows), hell, animal (an abattoir), jealous gods or demons, and heaven (an unsurprising bucolic scene)—and ultimately, we walk towards the transition of Doku and their rebirth. The realms of existence are mostly haunted by eerie visuals of ecological collapse and urban hellscapes.

“Doku is born to explore the secret of the human mind and the intention of the universe,” Lu Yang explains, as her website reveals more behind-the-scenes.

“Digital: Ayala”, the name of the exhibition, is further ensconced in Buddhism as it recalls the doctrinal concept of ālayavijñāna—an eighth level of consciousness, a fundamental storehouse of all past experiences ahead of reincarnation.

Doku’s space then belongs to a no-time or outside-time rather than a predictable near-future. “Doku: Digital Ayala” forms a project not of vanity but of being. Doku is perhaps what the iconoclastic Overman is to Nietzsche: the memory card of our past existence and a path towards historical and physical transcending.

Lu Yang’s previous projects include “Electromagnetic Brainology” (2018), “TMS exorcism” (2018), “Delusional Mandala Crystal” (2015) part of “Delusional Mandala” series and she created her first avatar “Uterus Man” in 2012. These works have in common the use of technology and virtual reality to better understand the human brain, experience and possibilities. Her work has been featured in galleries and solo or group exhibitions in Asia, Europe, Australia, New Zealand and Canada. In a climate of rising hate crimes against Asians in the United States, her artwork displayed in a New York City-based gallery and her participation in the Asia Society triennial through the 27th of June are noteworthy, timely and thrilling.

Is cyberspace a new nirvana? Would it be desirable even, to create a permanent avatar of ourselves? Several Silicon Valley-based transhumanists are cherishing this engineering dream, riding on the melancholy of a finite, earthly life and the prospect of lucrative outcomes to defy the inevitability of our death. Lu Yang shows that even other reimagined forms of self can’t break free of the laws of karma (the web of causality and interconnectedness of all things) and samsara (the endless cycle of attachment, suffering and rebirth).

“I hardly go out anywhere. I live on the internet,” Lu Yang recently said.

“Doku is not like digital idols, where they just wear nice clothes,” the artist said in another interview. “We really want to set up connections,” she added, referring to the human hands and brains which created her avatar.

Doku trades one realm for another and though parameters change, a cycle begins anew; the limitless becomes limited. They exude a sense of entrapment—not so different from social media-filled, cacophonic pandemic days when interactions with optimized avatars of strangers and friends have superseded in many cases real-life simulation. A techno-future already within reach and not all fulfilling. 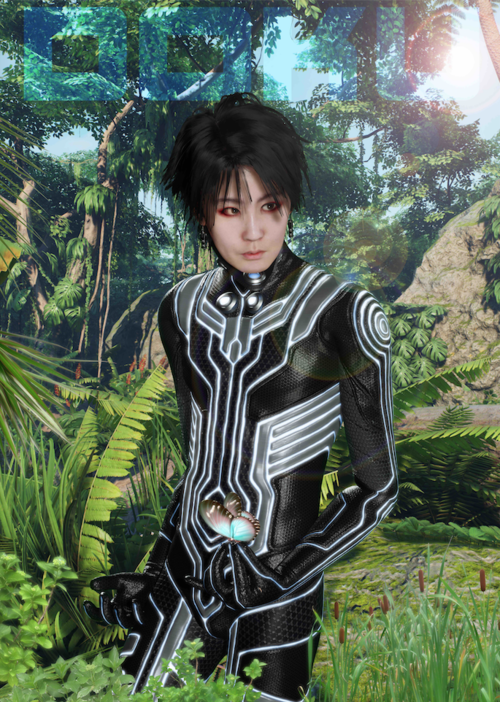