It’s an open secret that Netflix, in a concentrated effort to better compete with its established studio rivals such as Disney and Warner Bros., is aggressively attempting to develop new franchises. It’s why the streaming company spent more than $450 million to acquire the rights to Rian Johnson’s two Knives Out sequels. But even more prevalently, the company is trying to develop in-house franchises that start and end within the Netflix ecosystem.

One example of this effort is the company’s burgeoning relationship with filmmaker Zack Snyder. Netflix will release his original zombie heist film Army of the Dead in 600-plus U.S. Cinemark theaters this Friday before the highly anticipated film drops on Netflix May 21. A live-action prequel, Army of Thieves, which Snyder is producing has already wrapped production. Animated prequel series Army of the Dead: Lost Vegas, which Snyder is also producing, is currently in development.

“I just feel like this is a cool thing to start doing in the Netflix format,” Snyder told BroBible’s Post-Credit Podcast. “Netflix is a place to go for these kinds of blockbuster movies. That’s what I want. That language is a really cool and fun thing.”

Army of the Dead reportedly carries a solid $90 million budget as an ambitious genre-blending original film. It’s the type of expensive undertaking for unfamiliar concepts that you rarely see from major studios these days. The last megabucks new-to-screen franchise was The Hunger Games. These days, pre-existing material that audiences have a familiarity with are far safer bets, which has reduced the variety of tentpole features that get greenlit.

“This is my first movie I’ve done with Netflix,” Snyder said. “I haven’t analyzed the marketplace in a super deep dive, other than to say that it is true that Netflix and, in regard to Army, that, yeah, this is original IP. It’s a big budget, but not huge budget, it’s not a superhero tentpole budget. But the world building and sort of the specific entering of another world is akin to that kind of summer blockbuster creation.”

Snyder discusses how he had the freedom through filming to create an intimate and natural feeling in Army of the Dead. He didn’t want the film to be overly slick aesthetically, which could compromise the audience acceptance of the major elements and zombie tropes he was playing with. So he opted for a third-person point of view that attempts to make the viewer feel as if they are part of the journey with close-knit shots. He wants to create the sense that we, the audience, are members of the crew, which differed from the way even his own traditional superhero blockbusters are filmed.

“I just really got energized by the process and then that also led to my desire to shoot the movie myself and operate [the camera] and just really kind of connect sort of with cinema again,” he said. “Even making Justice League, your distance from the camera is pretty great. When you make a giant, blockbuster superhero movie, the cast is somewhere over there [gestures], you know? So for me, it was really nice to be right in the middle, to make this organic.”

Army of the Dead arrives in theaters on May 14 and on Netflix May 21. 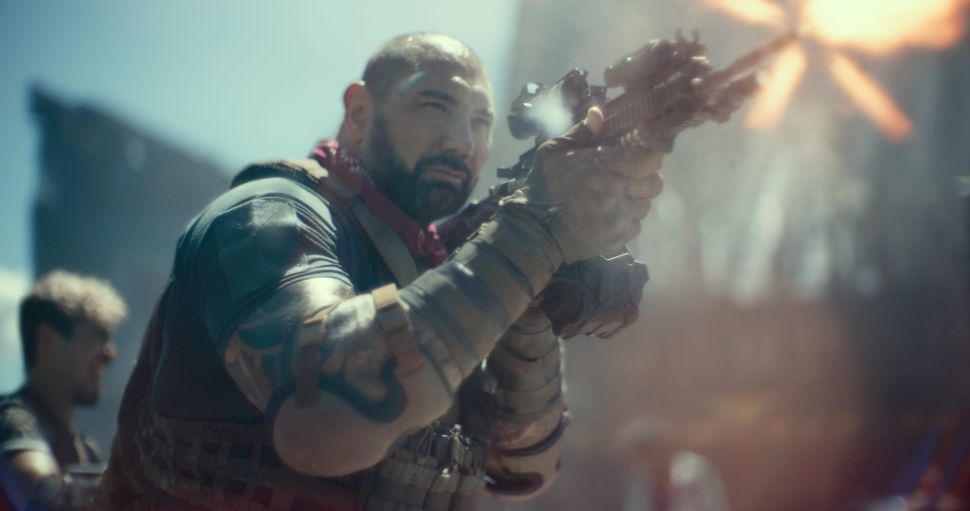