“The worst part of all serious disease is the anxiety it causes in those who are sick to those who love them. We must overcome our fear. When someone has AIDS, it’s safe to be friendly. Laugh with them. Cry with them. … AIDS is everyone’s problem and no one’s fault.If each one of us takes care and is responsible AIDS will be under control. Until then, we must learn to live with AIDS.”

Everything about Niki de Saint Phalle’s AIDS: You Can’t Catch It Holding Hands, seemed impossible: the childlike treatment of the total horror; an artist seeking humanity from a global community; an aesthetic that balanced downtown NYC, Upper East Side lux and Parisian illo.

How could this book (given out free in French schools!) even exist? It had taken President Ronald Reagan until 1985 to talk about AIDS; conservative arguments framed AIDS as a moral reckoning, one that judged gay men, drug users, and Blacks and Latinos; even in New York City, Mayor Ed Koch (believed to be gay as summarized by The New Yorker in 2013) was pathetically, homicidally slow to respond. The government, federal and local, just hadn’t cared, at all.

Page spreads from AIDS: You Can’t Catch It Holding Hands are currently on display at MoMA PS1 in Saint Phalle’s first exhibition at a New York museum. The show collects more than 200 works—sculptures, models, prints, drawings, jewelry and products, film, video, photography. The exhibition narrates a cohesive vision, from Saint Phalle’s 1960s emergence to her 2002 death, allying better known series—the “Tir” paintings, the “Nanas”, and Tarot Garden—with her architectural, performance, book and commercial endeavors. A year delayed, and maybe lacking some of the big sculptures that would have looked so dynamite in the PS1 yard, Niki de Saint Phalle: Structures for Life, is a brilliant and sensitive curation, offering visitors enough context and flare to put the artist in their heads and hearts forever.

In 2021, it’s surprising that Saint Phalle hasn’t already had a New York City museum show. Even in 1986, she was a celebrated figure—and one whose biography was almost magically aligned with her authorship of AIDS: You Can’t Catch It Holding Hands. Saint Phalle was American and French, New York and Paris; French by birth, raised in New York City, and the only woman admitted to the influential Paris-based artist group, Nouveau Réalisme. If she was iconic in France, as the angry young woman who made paintings by shooting them, she was no less present in New York City, living at the Chelsea Hotel and showing alongside the prominent artists of the day. But a male-dominated establishment also saw Saint Phalle as “primitive.” She lacked formal training and despite her insider status and decades of practice, her work was often dubbed “outsider art.”

Phalle’s overt anger, feminism, and calls for matriarchal power also set her apart from the art world. In her book, Mon Secret (1994), Phalle remembers her “Tir” series in relation to a childhood incidents of incest and sexual abuse, “WHO was the painting? Daddy? All Men? Small Men? Tall Men? … Or was the painting ME? … I was shooting at MYSELF… At my own violence and the VIOLENCE of the times.” Abuse and betrayal are central themes to Saint Phalle, but her anger wasn’t just personal. As she wrote in a 1991 letter to curator and museum director Pontus Hulté, “Very early I got the message that MEN HAD POWER AND I WANTED IT. YES, I WOULD STEAL THEIR FIRE FROM THEM. … Men’s roles seem to give them a great deal more freedom, and I WAS RESOLVED THAT FREEDOM WOULD BE MINE.” Bloum Cardenas, Saint Phalle’s granddaughter, who collaborated with curators in a 2002 retrospective at Bilbao’s Guggenheim Museum, spoke to The Guardian about the “Nanas”, Phalle’s follow up to the “Tir” series:

“For me, it is an army of women coming to take over the world. People forget that all these colours in mid-60s Paris were in really bad taste; pop hadn’t conquered the world and America hadn’t completely taken over. And at a time when Twiggy is how you’re supposed to look, she comes with these women who have breasts in your face, they are curvy, they flaunt their sex in your face, in every position. They are powerful, they are themselves.”

In a 1966 letter to her mother, Saint Phalle wrote, “Très tôt je décidai de devenir une héroïne. Qui serais-je? George Sand? Jeanne d’Arc? Napoléon en jupons?” (Very early I decided to become a hero. Who would I be? George Sand? Joan of Arc? Napoleon in petticoats?) Saint Phalle’s interest in the pop, the beauty and the horror of it, as well as in self promotion and fabrication, is in keeping with the practices of her contemporaries and later-in-life fellow scenesters, such as Andy Warhol and Yayoi Kusama. But these were dangerous ideas: that art could be, as she said in the 2014 film, Jean Tinguely – Niki de Saint Phalle (directed by François de Menil and Monique Alexandre) “a mass art object that everyone could have”; that an artist might sell to the public; that art didn’t have to be kept in museums.

Saint Phalle’s challenges to sexuality and gender, her aggressive, even lurid use of color, her marketplace experiments, her gigantic personality, made her of particular pertinence in the East Village. Her influence can be seen in David Wojnarowicz, for example, in his use of plastic dolls, or his “Metamorphosis” busts, or the painted surfaces of his sculptures, or the lurking forms of his snakes.

That Saint Phalle had grown up on the Upper East Side, and her jewelry and perfume lines were in the shop windows of Madison Avenue, made the critique that much more ironic. The value of art, then far more than now, was predicated not only upon scarcity and refinement, but inaccessibility. Physical inaccessibility, and emotional and intellectual inaccessibility. Saint Phalle’s public works, parks and interest in art for everyone, even children, was at odds with a paradigm of “great” work, guarded and pedestaled in a Romanesque museum; moreover, that so many people adored her work diminished its desirability to collectors. If everyone understood an artwork, ownership brought no pedigree—no demarcation of superior discernment—and the value was lessened. No doubt the overt woman-power contributed to the faint praise. In a 1966 installation by Saint Phalle, Hon-en katedral : Hon-en historia, exhibition goers lined up to enter a tremendous Nana figure through an opening between her legs. The work was so impactful that, it’s now said, the birthrate in the situ city of Stockholm went up for the year.

Soho was 57th Street’s answer to the East Village. The abstract expressionists and their descendants, along with Warhol, could recalibrate downtown. A few artists, very downtownee, would carry the Soho banner, and an art world that hadn’t intentionally demonetized itself could reassert its capitalist foundation. Warhol publicly embraced Keith Haring and Jean-Michel Basquiat, and even Saint Phalle. With a powerful media influence, Soho, not the East Village, took the torch from 57th Street. Altogether satisfying? Not really. Downtown was dying. Every gallery and museum opening was a wake for those who should have been there. The murderous ineptitude of government was too much to bear, and the presumption of “art for art’s sake,” an ‘80’s stand-by, had become the argument of the blind and heartless. New York had changed, and the world had changed. And the arts, broken hearted and furious, could not abandon activism and politics, which would cross over—cross the Bowery and Broadway, cross from the East Village to Soho.

Saint Phalle’s AIDS: You Can’t Catch It Holding Hands draws on the momentum of a decade, looking back to the youth “No Nukes” movement of the early ‘80s, and looking forward to an AIDS activism that established ACT-UP (Silence=Death) in 1987. With themes of machine, man, technology and a kind of Gaia insight into the profundity and inevitability of self-destruction and love itself, Saint Phalle’s work had always existed in a near past, very now, and future tense. And the culture war had begun, and AIDS, as Saint Phalle and David Wojnarowicz, as innumerable artists had realized, was the front line, the trench dug between uptown and down, and artists and the world.

“The world has been experiencing a whole pattern of auto-destruction, whether in environmental disasters like Chernobyl or health disasters like AIDS… Young people need to become involved. AIDS is a complex situation that’s sure to bring out the best and the worst in people. And it’s just beginning.” 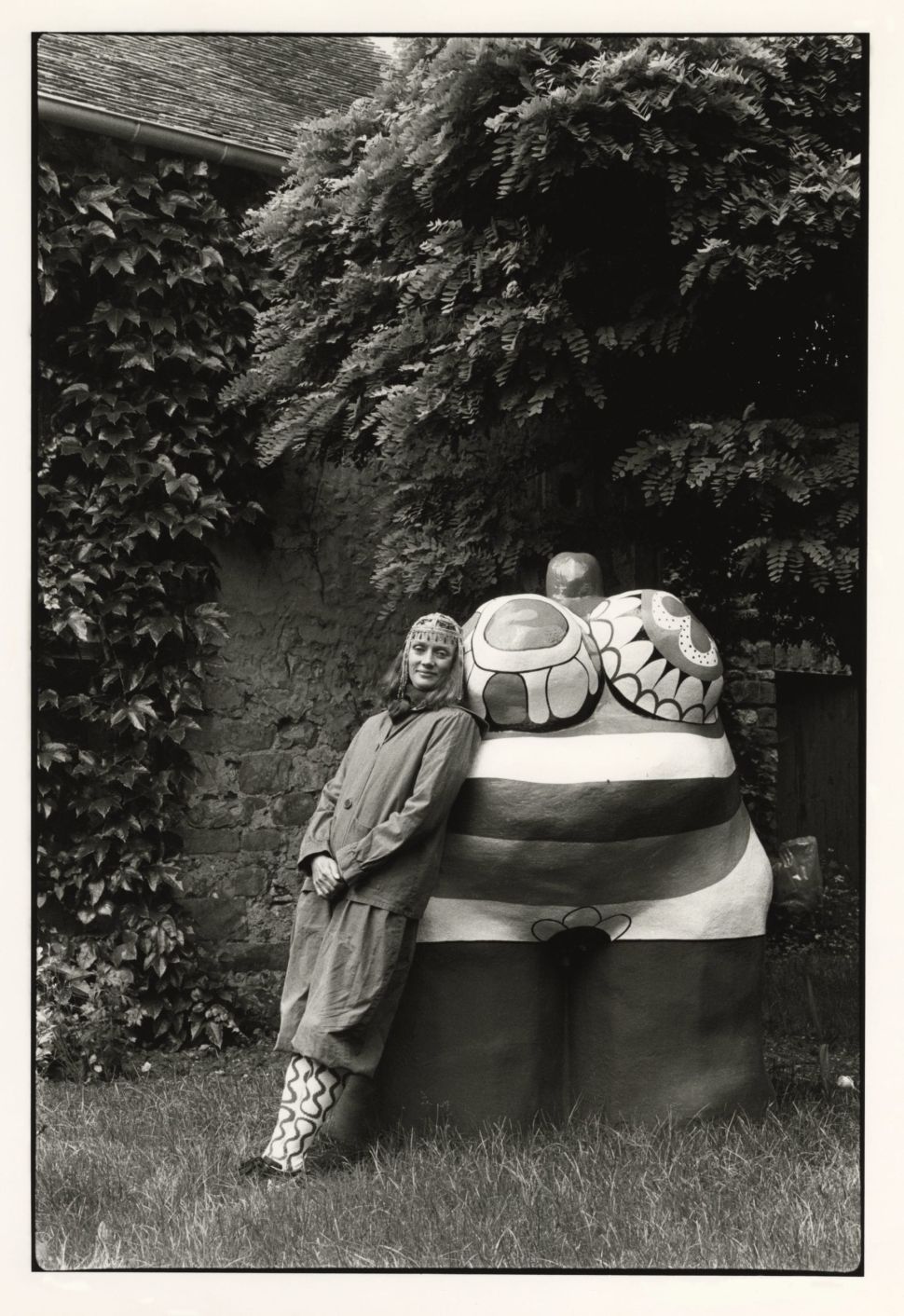