The British royals have been encouraging people to get their coronavirus vaccines when eligible, and now another member of the royal family has publicly received a COVID-19 shot. Prince William received his first dose of the coronavirus vaccine this week, and shared a photo of the event on social media. He also thanked all those involved in the vaccine rollout.

A picture posted on the Duke and Duchess of Cambridge’s official Instagram and Twitter accounts shows Prince William, who is wearing a medical mask, rolling up his sleeve as he is administered the jab, as the Brits say. The Duke of Cambridge wrote a personal message in the caption, which reads, “On Tuesday I received my first dose of the COVID-19 vaccine. To all those working on the vaccine rollout—thank you for everything you’ve done and continue to do.”

Prince William, who is 38, contracted COVID-19 earlier this year, and reportedly had a rough time with the virus. He isolated at the Cambridges’ country home, Anmer Hall, and luckily didn’t infect Duchess Kate or their three children. His father, Prince Charles, also tested positive for coronavirus last spring.

Both Prince Charles and Camilla Parker-Bowles received their coronavirus vaccines in February, a month after Queen Elizabeth and Prince Philip, who passed away in April, received their shots.

While the Prince of Wales, the Duchess of Cornwall, the Queen and the Duke of Edinburgh all publicized that they received the shot, the Duke of Cambridge is the first British royal thus far to share a photograph of himself being injected with the vaccine.

Prince William received the vaccine at an NHS-run public health facility at the Science Museum in London, just a short ways away from the Cambridges’ Kensington Palace home. It’s not yet clear if Duchess Kate has been vaccinated yet, but it seems likely that when she does get the shot, the Cambridges could share another photo, in order to raise awareness and make Brits more comfortable about getting the jab. 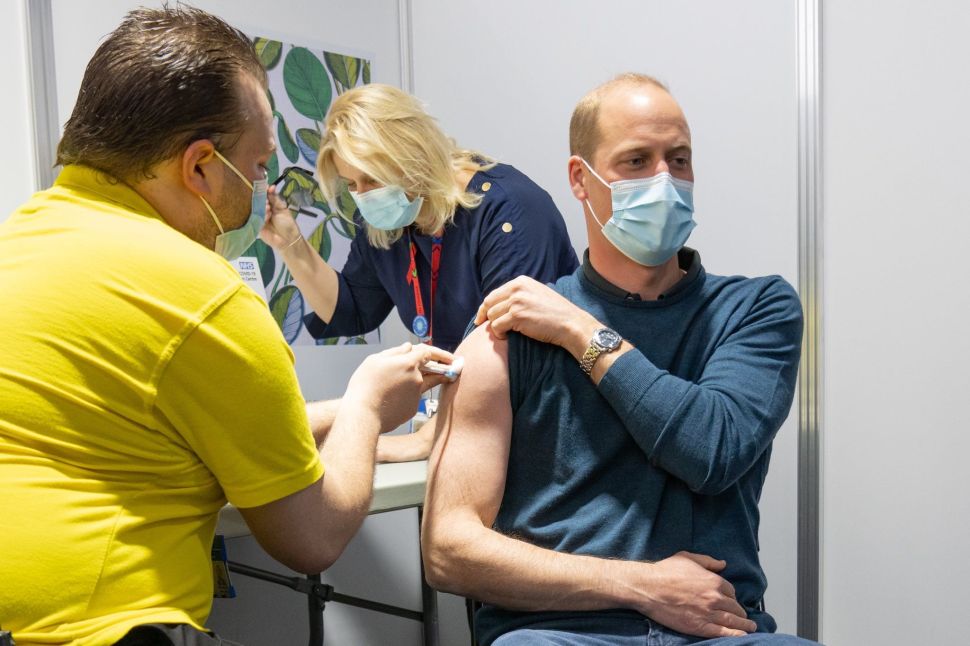