There were many significant moments set in the Cohens’ pool house throughout The O.C., the venerable teen drama that ruled the aughts and centered on the growing pains of Ryan Atwood (Ben McKenzie), Marissa Cooper (Mischa Barton), Summer Roberts (Rachel Bilson), and Seth Cohen (Adam Brody) in Newport Beach, California. But in one particular episode, Seth tried to dissuade his girlfriend, Summer, from telling her Brown University interviewer that designer Miuccia Prada is the greatest influence in her intellectual development.

Summer scoffed. Why would she lie? “If you want to memorize answers you think they want to hear, that’s fine,” Summer told Seth. “But I believe in being myself.”

“And by the way,” she added, breezing out the door. “Miuccia Prada combines styles from time periods in ways people never even imagined possible.”

Summer, portrayed perfectly by Bilson, was never your stereotypical rich bitch. Across The O.C.’s four seasons, she subverted the materialistic, mean, popular high school girl archetype in a sweeping arc that saw her evolve from the superficial best friend of perpetually troubled Marissa to one of the show’s most multifaceted, compassionate and resilient characters: an academically gifted environmental activist and steadfast backbone for all those in turmoil around her.

The main thread that kind of goes through the whole series is how strong she is, and I love that.

“I feel proud of her,” Bilson says, smiling through the telephone, speaking to Observer from Los Angeles. “The main thread that kind of goes through the whole series is how strong she is, and I love that. Just to see how far she goes, I feel proud. You know, I have a daughter, and I’m like, okay, if she watches [The O.C.] someday, she can see the arc and the growth you can have as a human, which is cool.”

Bilson is revisiting Summer on the new podcast, Welcome to The OC, Bitches!. She and co-host Melinda Clarke (also known as the manipulative Julie Cooper) are rewatching the iconic television series in its entirety and discussing it episode-by-episode, with special guest stars including cast members and sociologists to unpack its legacy. When the idea to do it came up last May, Bilson jumped at the chance immediately.

“I was like, absolutely! First of all, it’s so much fun to talk about The O.C. and my experience on it. And we get to rewatch it, which is like watching it as an audience member because it was so long ago.” Bilson asked Clarke to join her—they had last seen each other about five years ago, Bilson recalls, shortly after Bilson gave birth to her daughter—and when they talked again recently, it felt like no time had passed. “We spoke for over an hour and we’re like, ‘Okay, we have a lot to talk about, this is great!’ We’ve been so happy to do it and can’t wait for everyone to listen, hopefully.” It felt like the right time, she says, to do something lighthearted and fun amid the anxiety caused by the pandemic.

In conversation, Bilson feels more like a good friend than the beating heart of one of the biggest cultural touchstones of the new millennium. Resetting the tone of teen soaps with its sharp writing and indie rock soundtrack, The O.C. was a smash hit following its 2003 premiere and made instant stars of its young cast. Bilson grew up in Los Angeles and around film and television sets (her father is producer and director Danny Bilson), so wasn’t too phased by the media madness that quickly swarmed her. She was dating co-star Brody at the time and, she adds, the core four cast-mates also liked each other and hung out outside of the show, which created some built-in insulation. “Thank god social media didn’t exist then, you know, because that’s a whole other world. But we had each other. We all supported each other and we were in it together.”

At 39, watching herself as a 21-year-old is a trip. “Nobody likes to look back at themselves when it’s awkward, embarrassing years—and it’s all portrayed on television, you know, like, oh my god! It’s definitely embarrassing, but I can also appreciate the youth and recognize how far I’ve come and how much life has happened. It’s pretty incredible and surreal at the same time.”

A compelling hallmark of The O.C., of course, was how it parodied itself by being self-aware. There was The Valley, for instance, the fictional teen show that Summer obsessed over, and its reality spin-off, Sherman Oaks: The Real Valley (a Laguna Beach wink). The cast, themselves inspired many inside jokes, like how Death Cab for Cutie’s prominent role as Seth’s favorite band reflected Brody’s real-life fandom. That was all creator and executive producer Josh Schwartz, Bilson says. “Josh was infamous for just really paying attention to us in our own personal lives. Summer loving Golden Girls came about because Josh learned that I love Golden Girls.”

And while Chrismukkah wasn’t exactly pulled from real life—Schwartz told Vulture it was coined to both celebrate and underline Seth’s outsider status in Newport, recalling how Schwartz himself felt attending the University of Southern California—Bilson could also relate to the holiday. “My dad’s Jewish,” she says. “My mom was raised Catholic, but we weren’t raised religious, she was very spiritual. But we did Christmas and we would go to my dad’s family [for] Passover, Hanukkah. I definitely had the Chrismukkah experience and I’m appreciative of that.” (And Summer did save Chrismukkah that one time.)

Right now, Bilson is knee-deep in The O.C.’s first season. She admits she has no memory of any of it, so rewatching has been a genuine journey of discovery. “Even Josh was like, ‘Bilson! You were there. You were in the scene. Get it together!’ But I don’t remember!” she laughs. “There will literally be things that I have no recollection of doing.” Sticking out so far are moments like, in the pilot, where Ryan smoked a cigarette—a marker of a different time with what was deemed acceptable for mainstream television—and the bold Y2K fashion, much of which has cycled back in style. “They’re selling the Juicy [Couture] suits again in stores,” Bilson notes. “Even the little vintage Levi’s skirts, that was definitely on the show and those came back full-force.”

One thing Bilson does remember is the music. Indie rock was often described as another main character on the show and The O.C. established itself as a tastemaker. As it did for viewers, it opened up a new sonic world to Bilson, too. “Rachael Yamagata I was introduced to, whom I love, and all the awesome bands we had at the Bait Shop,” she says, referencing the rock club that featured live performances from artists like The Killers and Rooney. A favorite for Bilson is “Hide and Seek” by Imogen Heap, which played as Marissa shot Trey, Ryan’s brother, during a violent brawl in the second season finale. “That song will forever just be—being such a cool song and such a moment, I feel like, stands out for sure.”

Mazzy Star’s haunting “Into Dust” scored a particularly pivotal scene in the inaugural season where Ryan carried Marissa, sweat-soaked and barely breathing, from an alley after she suffered a drug overdose in Tijuana. It’s a heartbreaking, key early chapter in Marissa’s tragic downward spiral. The O.C. was never afraid of exploring complexities around addiction, social class, loneliness and grief, in both the teens and adults. “I do like that about it,” Bilson says. “I mean, it’s hard to say it’s refreshing because I have a daughter and I don’t want some of the things that Marissa went through to be reality for anyone.”

I’m watching Mischa go through all of these things, god, she really got put through it—and she delivered every time. Like, full on. I just watched the Tijuana episode where she OD’s, and I’m like, Jesus.

She continues: “And, I have to say, as I’m watching Mischa go through all of these things, god, she really got put through it—and she delivered every time. Like, full on. I just watched the Tijuana episode where she OD’s, and I’m like, Jesus. And she was 16 or 17 when we shot that and giving it her all and doing it so well. I’m just utterly impressed.”

Bilson would love for Barton to be a guest on the podcast. “I think if Mischa came on, I feel like that would be awesome,” she says. “I haven’t seen or spoken to her in so long, I’d love to catch up and I think that would just be a really fun conversation.”

Our talk moves to a reboot. If there ever were to be one, where would the gang be today? Bilson bets on Seth and Summer still being together, probably with children. Also, by the series finale, Sandy and Kirsten Cohen had another baby and so did Julie. “I mean, there’s this whole other generation at Harbor [School],” Bilson says. “Ryan is an architect, maybe. Did he end up with Taylor [Townsend, played by Autumn Reeser] at the end?”

I’m not sure, I answer. It felt like it was left up to interpretation. “I don’t know either,” Bilson echoes. But, Julie Cooper. Speaking of arcs and strength, she went from hellcat to college graduate, ultimately earning the viewer’s sympathy. “That’s what I’d want to see the most. What is she up to?”

Perhaps one of the most enduring things about The O.C. is how it still offers so much to talk about. The show captured the zeitgeist of the early 2000s, speaking directly to its audience and cementing so many aspects of itself into the greater fabric of pop culture. But even now, nearly 20 years later, the impact it made remains and continues to be relevant.

“A lot of it is because I think the right group of people, all around, came together at the right time and created something that—you could feel it, you know?” Bilson says. “High school angst will always be there. That will definitely always resonate.”

Welcome to the O.C., Bitches! is available through Apple Podcasts.

The O.C. is streaming in full on HBO Max. 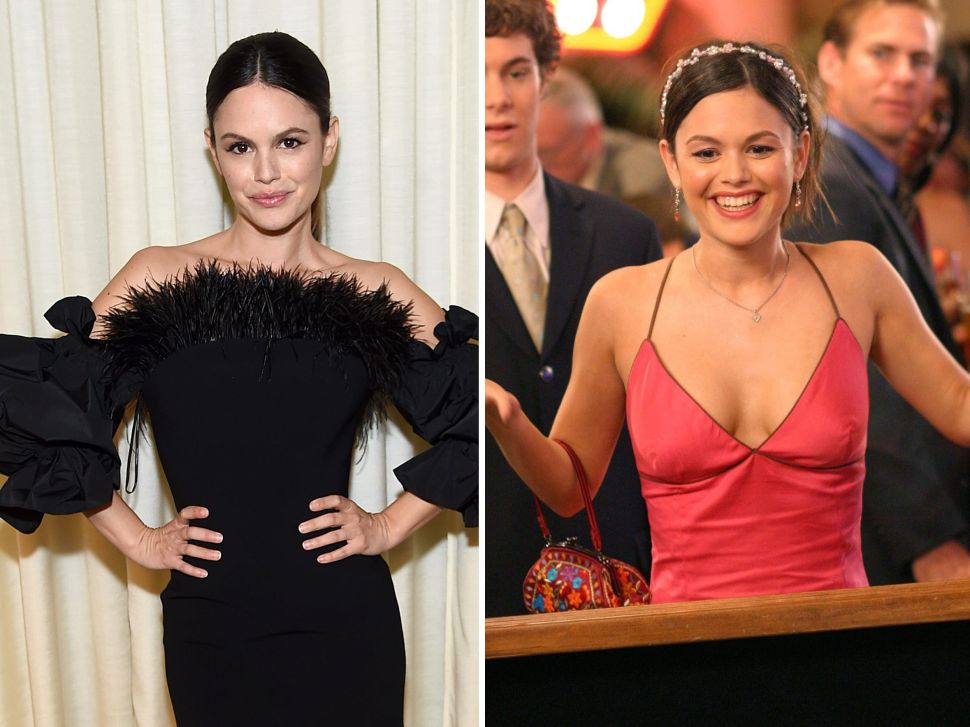