Recently, I watched monologist Mike Daisey explain Scott Rudin at the Kraine and found myself sincerely wishing he’d explore miming. After streaming Fake Friends’ reality-TV wallow This American Wife, I mused in a similar vein: What impact would these extremely online camp clowns have if you took away their GoPros and hashtags? For many, theater is most resonant when bodies in space are unfiltered by anything but our senses and biases. Both Daisey’s torrents of social commentary and Fake Friends’ manic pageant of Real Housewives clips are engaging, then benumbing. The lecturer is so deep in their subject, the class has drifted asleep.

I’m focusing on This American Wife, a multi-camera feat packed with outrageous found text and lurid tableaux, performed in a virtuoso style we’ll dub commedia dell’queer. Three gay men — Jakeem Dante Powell, Michael Breslin, and Patrick Foley (the latter two co-writers) — Uber to a McMansion somewhere on Long Island (the show is streamed on location). A Wife, visible only from behind as a siren swaddled in leather, fried extensions and lacquered XXL press-ons, beckons them into the house. The trio enters, their street clothes morph into pastel leisurewear, and they plunge into a feverish recitation of their favorite Real Housewives zingers and smackdowns. Wine is swilled, raw chicken is washed with hand soap, and realness is kept.

Of course, said realness is fake, curated by retakes and concretized on video, thus meta-real in its simulated-performative liminality. I think. Sample discourse: “My husband’s real, bitch.” “As real as your hair.” “Your tits, your ass, your whole ugly face is fucking UNREAL.” It’s all there, the psychotic materialism, internalized misogyny, and the general Heisenberging of life with cameras stuck in your face 24-7.

About thirty minutes into the fight (continuously shot as camera operators glide through so-chic-they’re-tacky rooms), the pastiche decays. Grabbing the cameras, the actors train them on each other to pry out painful admissions about body shame, growing up gay, and sexual trauma. Powell admits that he hates his body; Foley tearfully recalls an assault from college. At first, the shaky-cam verité seems improvised but factual — the actors are that good. But later, Breslin tells a similar story of sexual violation with the same details as Foley (predator with rainbow fauxhawk).

Eventually, the boys go on “vacation,” their boozy island revelry spilling out into the backyard and the pool, and the video mise en scène fractures into music video, pseudo-doc voiceover, subliminal flashes of Real Housewives clips, and split-screen lysergic monologues. It’s a lot. Naturally, it helps if you’re conversant with the divas from the semi-scripted Bravo franchise — wealthy, oversharing ladies such as Erika Jayne, Kandi Burruss, the Countess, NeNe Leakes, and Countess Luann de Lesseps. I am not…and have no plans to be.

Directed by Rory Pelsue with dramaturgy by Catherine María Rodríguez and Ariel Sibert, and co-produced by Slave Play playwright Jeremy O. Harris, This American Wife sets out to be an avant-garde, haute-camp allegory of seduction, corruption, and betrayal that conspicuously consumes itself. The fingerprints of other artists are all over the place, from Albee’s encrypted social games to Genet’s drama of screens and masks and Fassbinder’s cinema of abjection and resistance.

But despite its nonstop visual flair, acting dazzle, and the athletic choreography of cameras, I pined for critical distance between the boys and their fetishized TV show. Deconstructing an obsession with a cultural property that has minted celebrities, generated a fortune, snared millions of viewers, and left a number of supporting “characters” dead by overdose or suicide should feel more consequential and disturbing than a 90-minute TikTok on molly. I wanted these giddy idolators to nail their god to the hull of a luxury yacht.

The script’s directions and lines namecheck the Wooster Group and Bertolt Brecht as aspirational touchstones, but both are dubious. There’s not enough formal estrangement and sheer weirdness to support the Wooster comparison, and I didn’t track a sustained class or moral critique, just a fanboy frolic that flirts with trauma. What if you did a Fire Island riff on The Maids in which Madame never showed up?

Likewise, you keep waiting for an “exorcism” portion of the ritual, but it never arrives. The final section is an improvised reunion against a green screen in which the imperious Foley quaffs Pinot Grigio and lashes into his costars and the show’s critics, which was amusing but desperate. (The night I watched they dragged the New York Times theater section most thoroughly; gulp.)

In the end, Fake Friends should be followed by anyone who’s serious (or angry) about theater; they’re smart and talented and playing the long game. Think of Elevator Repair Service in the 1990s, Radiohole in the 2000s, and Half Straddle in the last decade; design-forward devised troupes push the field forward and make us see drama differently. After last fall’s meme-driven farce Circle Jerk and now this ambitious but exhausting mirror ball, I can’t wait for them to jump out of the laptop and join us in reality. 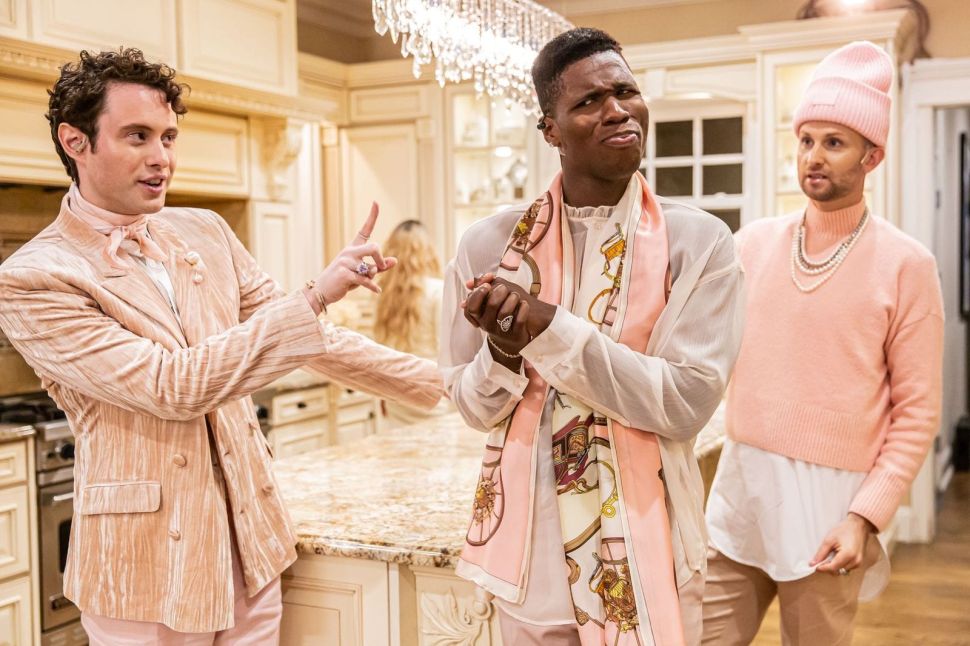