The Mona Lisa has been one of the most famous paintings in the world for hundreds of years now because of the mystique surrounding its theft, but interestingly, there have also been copies made of the painting that are almost as illustrious. In June, Christie’s Paris will offer for sale Hekking’s Mona Lisa, a replica of the original that was acquired by its mercurial collector from an antique dealer in a small village near Nice. Because of the painting’s unique history and collector Raymond Hekking’s particular zest and enthusiasm for it, Hekking’s Mona Lisa is anticipated to sell for between €200,000 and €300,000.

Raymond Hekking, the collector in question, devoted an enormous amount of energy to attempting to prove, extraordinarily, that the Mona Lisa in the Louvre was not the original, and that he possessed the authentic version. Hekking managed to draw the attention of the international media with this theory, and he also directly challenged the Louvre with the theory that after the Mona Lisa was stolen from the museum in 1911 by Vincenzo Perugia, the restitution of the authentic work should therefore be called into question.

“Art challenges, fascinates, sometimes obsesses,” Pierre Etienne, the International Director of Old Master Paintings at Christie’s, said in a statement. “Hekking’s Mona Lisa that we are pleased to present bears the name of its owner and inventor, Mr Raymond Hekking (1886-1977). She is the perfect illustration of the fascination the Mona Lisa has always inspired and which she exerts more and more. She is the dream of a man with a passion for art. She is his Ideal. Raymond Hekking was her staunch defender among art historians and the world’s media in the 1960s. She will be his Muse, he will be her Poet.”

Several copies of the Mona Lisa have been made throughout history; one of the most famous, which was purportedly made in da Vinci’s studio by one of his students, resides at Madrid’s Prado museum. However, Hekking’s particular zeal for his canvas epitomizes the old adage that beauty (and value) is in the eye of the beholder. 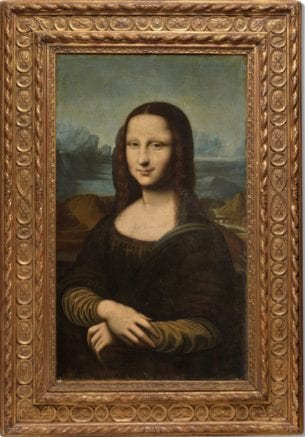