This week marks the 100th anniversary of the Tulsa Race Massacre, a devastating attack on a blossoming Black community by a white mob that culminated in hundreds of deaths and the razing of thriving businesses and community centers. Black Wall Street Gallery in SoHo is currently showing an  exhibition commemorating the tragedy, and this week, according to the owner, the gallery has been vandalized multiple times in a manner that suggests that the acts were hate crimes. Reportedly, on Sunday, Monday and Tuesday, defacement occurred; once, white paint was applied to the gallery’s window so that the name of the gallery was obscured.

Another incident of defacement was the application of the letters “EDHRLL” to the gallery’s window display, and at another time, graffiti reading “ETC REAL ART” was drawn on the location’s front window. “A literal white washing,” had occurred with the white paint being applied to obscure the gallery’s name, owner Ricco Wright told the New York Times in an interview. “We’re going to leave that there and just put another vinyl sticker above it with the same lettering to let them know when they go low, we go high.”

“It was both deliberate and intentional for someone to white wash Black Wall Street on the exact date 100 years ago when the massacre happened,” Wright continued. “We want to thank everyone who has reached out in solidarity and support given all the vandalism,” the gallery added in an Instagram caption. “We’ve decided to leave the first two acts of vandalism on the glass to remind the world that hate still exists in 2021, even in New York City. But our plan is to keep on pushing like Curtis Mayfield.”

It’s not yet clear who the perpetrators of the vandalism are, but Manhattan borough president Gale Brewer specifically condemned hate in New York in a press conference on Thursday at the gallery. 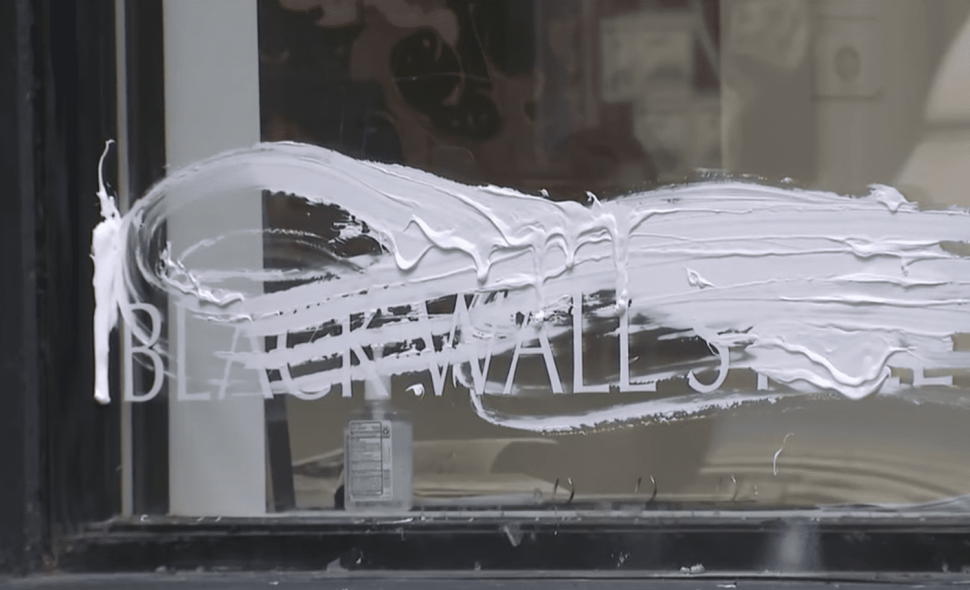