The 2018 film Blindspotting was justly acclaimed as a bitterly loving and lovingly bitter portrait of a gentrifying Oakland. It was especially lauded for the ambitious and unconventional script written by stars Daveed Diggs and Rafael Casal.  Compared to the new STARZ spin-off television series of the same name, though, Blindspotting the movie looks surprisingly Hollywood. The series is experimental in some ways, but what really distinguishes it from its origins is its television-ness;  it embraces sitcom tropes, an ensemble cast and woman-focused stories. In doing so, it manages to be that rare TV adaptation that surpasses its movie predecessor

The big-screen Blindspotting is about Collin (Diggs), who is reaching the end of his parole term, and his friend Miles (Casal) who is determined to get him into trouble. The television show, conceived again by Diggs and Casal, is set half a year later, after Collin has left town. Miles is still around, but at the beginning of the show he is arrested for possession with intent to distribute, and is sentenced to jail for an indeterminate period. His partner Ashley (Jasmine Cephas Jones) and their six-year-old son Sean (Atticus Woodward) are forced to move in which Miles’ hippie mother Rainey (Helen Hunt) and Miles’ extremely unwelcoming sister Trish (Jaylen Barron).

Blindspotting the movie pushes back against typical film tropes in many ways—not least in having Diggs play the empathetic lead role with Miles as his unpredictable and dangerous white sidekick. But it also plays into certain movie expectations. Collin and Miles both are trying in different ways to be men, which involves negotiating their relationship to violence. Director Carlos López Estrada breaks the movie’s easy, discursive pace with sudden, stylish depictions of brutality. Miles and Collin get into fights, and Collin witnesses a traumatic murder by police. The conclusion of the film shows Collin improbably confronting the culpable officer with a firearm drawn. It’s a hyper-stylish scene that echoes the climax of high-end genre movies from Tarantino to Spike Lee, in which no conflict can be resolved without the guns coming out.

That’s not the case in the television show, though. At least in the six of eight half-hour episodes available for review, there is little in the way of violent confrontation or gunplay. One episode is entirely given over to deliberating whether to spank a child. (They decide not to.)

The distinction here, in genre and approach, has a lot to do with gender. Television has long been seen as a more feminized medium than film. Its audience still leans toward women, and the STARZ network in particular has tried to cultivate a female audience. For Blindspotting, that means shifting the lead role to Ashley. But it also means telling a different kind of story which is less about male-male bonding and tension, and more about family and community.

Blindspotting is a high-quality, ambitious show, and it makes a number of dramatic stylistic choices, with varying success. Ashley’s spoken-word hip-hop monologues to the camera often seem unnecessary, belaboring emotions and characterization which the enormously talented Cephas Jones is perfectly capable of conveying more directly and effectively through facial expression and body language. On the other hand, the series’ incorporation of choreographed movement and ensemble quasi-dance numbers is often inspired. In one of the best of these, Ashley sits stock still in the waiting room at the jail, her face a mask of hopeless despair, as other visitors shift and pace and jitter around her in fast forward. The clock crawls and races at the same time, a vivid image of how the loved ones of those incarcerated are also doing, and done by, time.

The real genius of the series isn’t in its Peak TV innovations, though. It’s in the way it uses its own unremarkable pre-Peak-TV television-ness. Most of the immediate plots are low-key sitcom boilerplate setups: Ashley deals with rich assholes at the hotel where she works; Ashley tries to figure out how to discipline Sean after he kicks her; Ashley tries to decide when and how to tell Sean his dad is in jail.

Oakland in the movie is the setting for Collin’s drama. Oakland in the STARZ show, by contrast, is a whole world of people negotiating the job market, law enforcement, gentrification and a generally hostile white society.

But the banal-as-life stories take on a painful weight in Miles’ absence. Ashley has to keep dealing with petty shit. Her grief and desperation shows up each day, like everybody shouting “Norm!” on Cheers. Life goes on without any particular fuss, and she can’t stop it. A gun battle in this context would be almost a relief.

The series also makes the most of serialized television’s tradition of multiple storylines. The movie Blindspotting was focused on Collin and Miles and their friendship. It doesn’t do much to show other perspectives.

The TV show is very much Ashley’s story. But other people get narratives as well. Petulant teen nightmare Trish turns out to be a lot more vulnerable than she looks as she tries to get a loan to start her own strip club. Collin’s sister Janelle (Candace Nicholas-Lippman) circles a sweet, blink-and-you’ll-miss-it maybe-romance with her mom’s boarder Earl (Benjamin Earl Turner).

Oakland in the movie is the setting for Collin’s drama. Oakland in the STARZ show, by contrast, is a whole world of people negotiating the job market, law enforcement, gentrification and a generally hostile white society. And that negotiation isn’t made with guns, but with each other.

Traditionally, film has been considered a more prestigious, more ambitious and more personal mode than television. That’s changed somewhat recently, as TV budgets have gotten higher and film stars have popped up in Netflix or HBO series. Blindspotting 2021, though, is a reminder that television isn’t just good when it becomes more like film. The medium has its own traditions and its own virtues. Sometimes smaller stories are better, if you’re willing to see them. 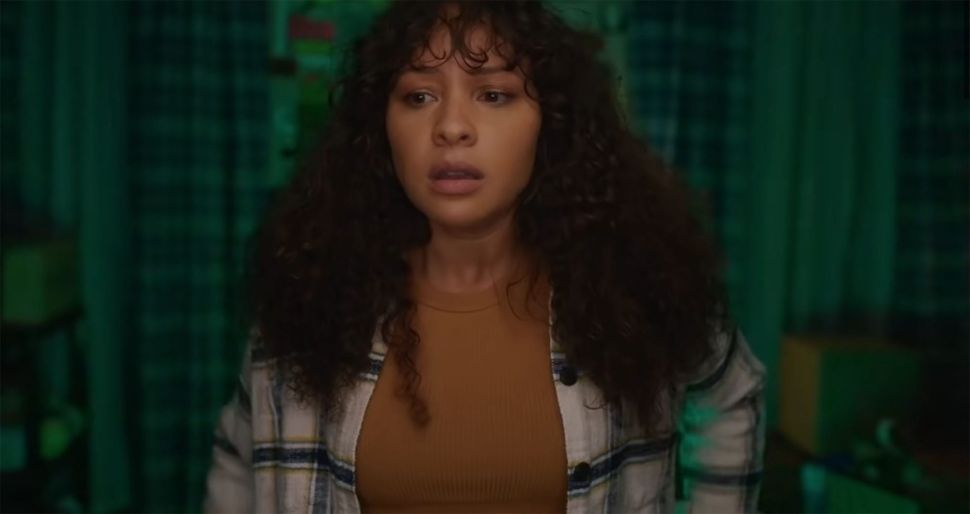