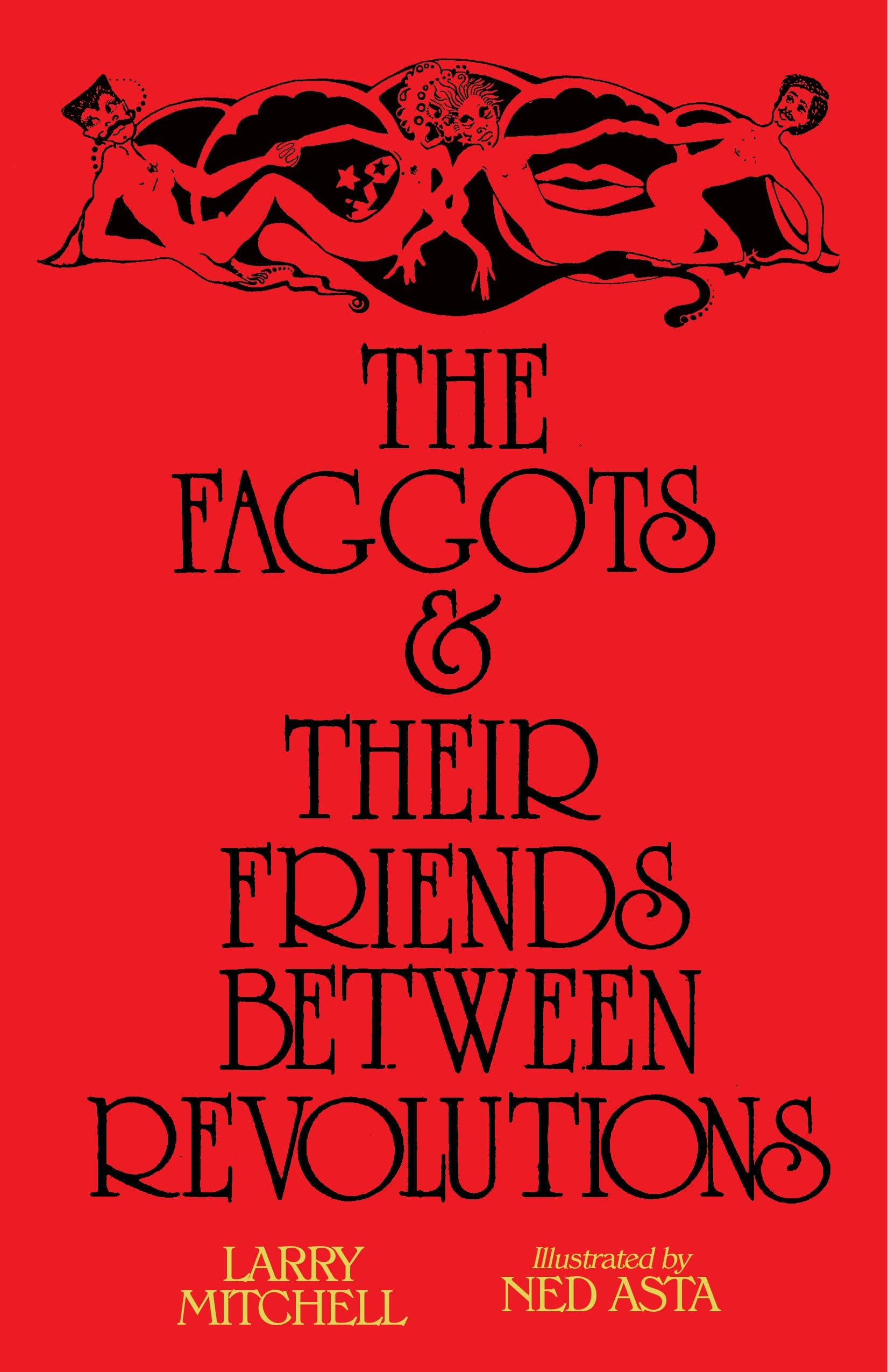 Originally written as a children’s book, The Faggots transports us to the lush queer underground of Ramrod, a quickly unraveling empire led by the paranoid and patriarchal “Warren-And-His-Fuckpole.” The fabulous group of dissidents—made up of the faggots, the faeries, the women who love women, the queens, the strong women, the faggatinas, and the dykalets—find each other in the nooks and crannies of devastation, subtly changing their identities to throw off “the men without color.” In Ramrod, solidarity emerges not from a fixed set of identity categories but from collective stakes: a shared vision of a set of relations rooted in luxury, laziness, and play— and one which naturally positions the friends in coalition against the men.

Central to the ethos of the book, Asta’s work is characteristically cheeky. In some places, her Aubre-Beardsley inspired illustrations fill the entire page: a circus-like cityscape, the interior of a beauty salon, dance parties that transform prison keys into musical instruments. In others, playful doodles decorate the book’s borders or frame the aphorisms and short stories scattered throughout. So much happens in each drawing— espionage, refusal, cruising, cunning, smut, promiscuity, hustling, scamming; endless love, endless gossip, endless becoming and unbecoming. Here, language is a blueprint, but art actualizes a present condition of freedom. Politics blossoms at the level of everyday life, sometimes exploding into the streets, but always emanating from the private.

The Faggots draws directly from Asta and Mitchell’s experiments with queer communal living in the late ’60s and ’70s, particularly their nearly a decade at Lavender Hill. Built on unceded Cayuga Nation land, twelve miles south of what is also called Ithaca in Upstate New York, the 80-acre commune was made up of bisexual and gay men and women, mostly Jewish and Italian from the city, who were looking to counter the isolation imposed on queer life by putting socialist and feminist ideals into practice. The chosen family—which included Asta and Mitchell along with members Sunny Bat-Or, David Hirsch, Bobby Jake Roberts, Yvonne Fisher, Lazar Mintz, Mitchell Karp, Joseph Modica, Chaya Spector, Steve Waring, Francesca “Luna” Santini, and Allan Warshawsky—first found each other at the usual spots: study groups or Gay Liberation Front meetings; the Rambles in Central Park or the Continental Baths. On Staten Island, where Mitchell was a longtime professor of courses like “Community-building,” the group formally began to coalesce. “Everyone sat on the floor,” Asta tells me, “sometimes drinking wine, always talking sociology.” It was a pedagogy that naturally birthed a commune on the Island and which, after a political split between straight and gay members, moved Upstate.

While gay collectives were emerging across the United States at the time, Lavender Hill was unique both in its longevity as well as its refusal of any forms of orthodoxy or sectarianism. “We would put on costumes, take quaaludes, genderfuck, dance a lot,” Asta tells Observer. “We were having a great time.” They used fabric to create bedroom walls and pumped in the snow. They gave each other nicknames (Asta was “Loose Tomato,” due to her nudist tendencies) and began using “Mx. Per” (short for Mx. Person) rather than gendered pronouns. Many of the members became involved with Moosewood, a collectively-owned vegetarian restaurant in town where Asta still works with her now-grown son Tazio.

For the illustrator, Lavender Hill was an extension of the ephemerality that survival often requires. Born in 1947 in Queens, Asta attended Catholic grammar school (where she was sent to the principal’s office for “drawing naked women”) before graduating from New York City’s School of Visual Arts. She was “a city girl”: living on MacDougal Street and then Second Ave; performing with Hot Peaches, Jimmy Camicia’s radical theater troupe which included the iconic liberationist Marsha P. Johnson. Later, she toured in Europe (“they have a different idea of theater there,” she tells me tersely, “they pay you”), spent time in Oakland (with “a beautiful lover”), and then moved to Malibu (where “the politics are disgusting”). Ultimately, Asta returned East, where she “fell in love with everybody from Lavender Hill,” and where she has since remained. As in her drawings, Ned’s life is marked by cyclicity; moving between the city and the country, hiding in plain sight, creating “someplace else” each day.

Not yet co-opted by the forces of capital and empire, gay liberation did not sell easily. The straight presses “wouldn’t fucking touch the book,” Asta tells Observer. The gay ones were too broke. So Mitchell and his friends published the slim volume themselves, founding Calamus Books in hopes of publishing more “gay male or lesbian writers.” Eventually, though, “everything went dormant”: Reagan took office, Lavender Hill members moved back to the city, Stonewall’s revolutionary spirit was diluted with assimilationist demands like marriage equality and the right to serve in the military. In spite of falling out of print in 1988, The Faggots continued to circulate through more covert networks, bootlegged copies passed around at dinner parties and disseminated across the Internet. In 2019, for the book’s 40th anniversary, and in a moment that seems to have marked a meaningful resurgence of queer/trans radicalism, Nightboat Books brought it back into print, newly contextualized with essays by filmmaker Tourmaline and performer Morgan Bassichis.

It’s appropriate that the book made its way to cult classic status by way of queer family. As is the reality of all separatist projects, Lavender Hill was never utopian. Early on, conflicts arose over the equal distribution of labor, romantic heartbreak, and a need to balance privacy with collectivity. By the peak of the AIDS crisis, many members had moved back to the city, spending time at ACT UP meetings and die-ins after having lost communard Lazar to the virus. But Lavender Hill also emerged from a love ethic that expanded the domain of the political; an understanding of queerness not as an essentialized identity but a particular point at which to open ourselves up to broader political struggle. In each of Asta’s sketches, liberation is found in intimate, in the communal, in love as doing; in those ordinary acts of care that make up the texture of faggot life.

This time of year, Asta is preoccupied with what seeds are growing. Her zucchini is doing well, and vibrant red flowers decorate the porch. There is a chicken coop, and hot , and Lavender Hill is only a short walk away. “What’s happening lately is fabulous,” the now 74-year-old marvels, her nose ring sparkling a little as she looks out towards the mountains. Last summer’s uprising, anti-pipeline protests, Palestinian liberation, tenant organizing, rapidly expanding mutual aid networks, anti-fascist movements across the world— “it gives me hope, it’s astounding.” Asta tells me about her co-workers at Moosewood who have been teaching her about the new iterations of fun younger queers are having with gender: they/them pronouns, the articulation of identities like “non-binary,” a general disinterest in having to identify in the first place. “It makes me want to live more,” she says, “it makes me want to learn everything I can.”

It’s ironic and humbling. Recently reprinted and now in the process of being translated to Spanish, The Faggots is a record of the queer hope, love, and militancy that informs the current moment—“an ode to,” as Mitchell writes, “the old faggots who were there and helped make this happen just by being there.” Laughing slightly, Asta tells me that, in the wake of the previous presidential regime, she is often asked if the book is about Trump. She shakes her head. “But this isn’t about Trump! This is about anarchy! This is about resistance!” And isn’t that what abundance and pleasure are all about? This is a place where we love each other more than we hate the current order; a place where friends teach us more than any political theory or manifesto or historical text ever could. 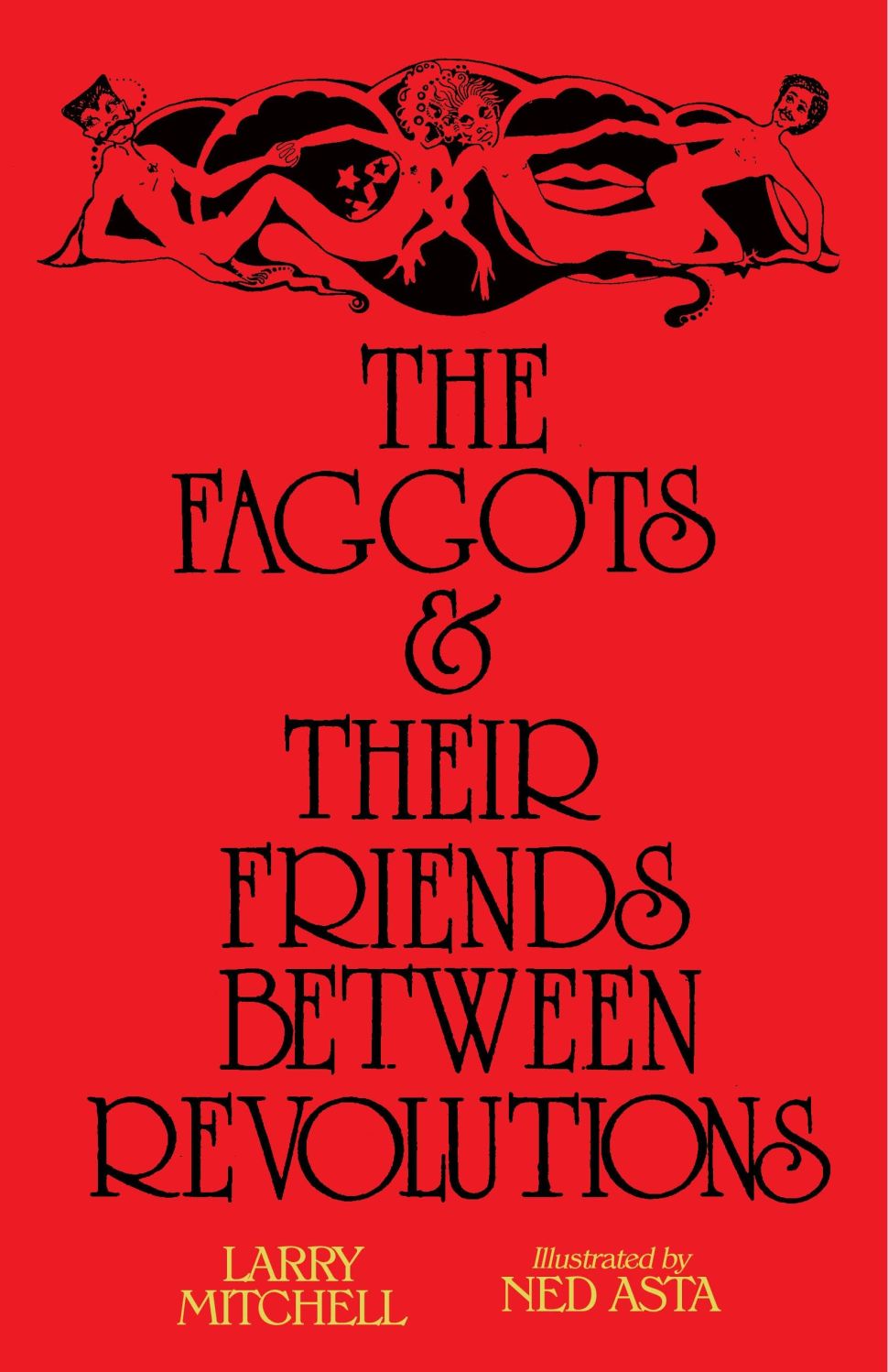