All signs point to Marvel’s Loki being yet another hit for Disney+. Marvel Studios

Do the controversies that course through social media have any real impact on a company’s bottom line? It depends. But in the recent cases of major streaming services, such as Netflix and Disney+, the answer usually is no.

Redbubble, a platform that enables artists to sell their own on merchandise such as T-shirts and coffee mugs, alerted Twitter user @YourBoswell that one of their designs was being removed from the platform because “it may contain material that violates someone’s rights.”

“The owner of these rights has provided us with guidance describing the type of content they consider infringing that should be removed from the marketplace,” the email reads. “In most cases, this means that the rights holder did not specifically identify your work for removal, but that Redbubble has detected potential similarity between your removed work and one or more words, phrases or images included in the rights holder’s removal guidance.”

The art in question is tied to Loki and the rights holder indicated is Disney Enterprises, Inc., according to Redbubble’s email, though that remains unconfirmed. The concern this case has sparked online is that the all powerful Mouse House may be trying to copyright a figure that has existed in Norse mythology and beyond centuries before becoming a mainstay of the Marvel Cinematic Universe (or even Marvel Comics). Despite this, Disney+’s new blockbuster Marvel series Loki, starring Tom Hiddleston, is surging in popularity.

Loki has become the most in-demand TV series in the world across all platforms just seven days after launching, per data firm Parrot Analytics. This is a faster rise to the top than its sibling Marvel series The Falcon and the Winter Soldier (eight days post launch) and WandaVision (14 days post launch).

On Wednesday, June 16, when the show’s second episode was released, Loki earned 89.9x more audience demand than the average show worldwide. This was 29.5% higher than second place Game of Thrones, which has enjoyed a significant global resurgence in demand following HBO’s promotion of the Iron Anniversary back in April. 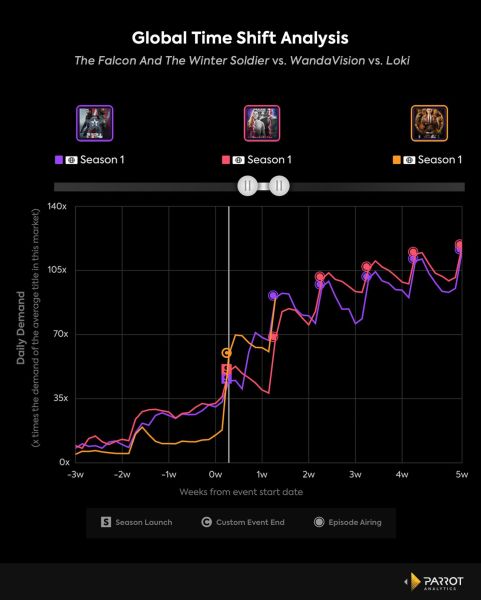 On a time shift analysis from Parrot Analytics, global demand for Loki is virtually tired with The Falcon and The Winter Soldier, while it is significantly ahead of WandaVision. As the most purely entertaining Marvel Disney+ series featuring easily the most popular lead character of the three shows thus far, this isn’t a huge surprise. Disney CEO Bob Chapek did provide the vague platitude that Loki is the most watched Disney+ original premiere ever, though no specific numbers were given.

The Marvel Cinematic Universe is really just a blockbuster big screen version of episodic storytelling. As such, it’s no wonder that Disney+’s weekly release strategy for the most popular creation in Hollywood is building demand for its series over time. Following the pattern above, Parrot Analytics expect global demand for Loki to steadily grow week over week as long as new episodes are released. Hiddleston himself has hyped up Episodes 4 and 5 as a turning point where the “series takes off” in unexpected directions.

The building interest of its weekly releases and the speed at which Loki ascended to the top of the global rankings helps partly explain why Disney+ has moved from a Friday to a Wednesday release date for new original series. The other part of the equation is a growing list of in-demand original titles that enables Disney+ to expand its domination of the weekly schedule. Star Wars: The Bad Batch is currently enjoying Friday releases while Disney+ films and Premier Access titles will continue to release on Fridays as well. 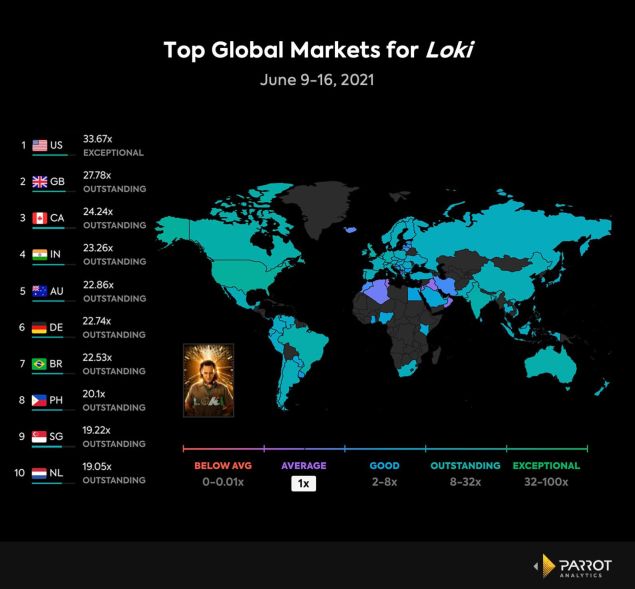 Loki‘s global appeal is a strong driving factor for its popularity thus far. Per Parrot, it has achieved Outstanding demand levels in countries in Asia, Australia, Europe, North America, and South America. The ability for content to effectively traverse various markets is one reason why Netflix has been investing in overseas programming for years. Disney+ is starting to follow suit. Its ability to cultivate pre-existing IP and franchises to support new projects remains unparalleled.

Parrot Analytics sifts through social media, fan ratings, and piracy data to represent audience demand, which reflects the desire and engagement expressed for a title within a market. While that can sometimes skew the data in favor of a title on a platform with a significantly smaller reach than its rivals but with vocal online fans, it does help to quantify the intangible buzz element of a series.

We’ll see if this copyright conversation develops into something more substantial in the coming days. But as of right now, the bubbling potential controversy does not appear to have dulled audience’s thirst for Loki and the Marvel Cinematic Universe.