“How in the hell are you not dead?” asks Tej, the technical expert played by Chris “Ludacris” Bridges, of Tyrese Gibson’s Roman, after the latter’s militarized vehicle dislodges itself from a crevasse, blows up on a landmine and yet somehow leaves everyone in its proximity unscathed.

The line develops into a bit as the film and its characters globe hop with its plot — two bitterly estranged brothers (played by series centerpiece Vin Diesel and overmatched newcomer John Cena) chasing after top-secret tech that promises its possessor domination over the world’s computers and weapons systems. In a meta riff that blends the meaning of life with the absurdity of long-running movie franchises, Roman continues to question why and how it’s possible that he and his crew are still alive after 20 years of death and logic defying adventures.

Roman’s ruminations on existence are mildly funny at best; with the two most comedically inclined members of the outfit — Dwayne “The Rock” Johnson and Jason Statham — largely absent, laughs are in somewhat short supply in F9.

Still, it’s a pretty good question. Why is this multi-billion dollar franchise built out of a cheesy teen street race movie from 2001 still alive? And after a year where the most memorable speeding vehicles in our lives were the siren-blaring ambulances racing through the canyons of our cities, the question is there for us as well. How are we still here, and why?

You would not expect a movie as on-its-face preposterous as this one to be able to provide much insight into such a profound query, and it doesn’t. Yet at its very best, there’s something positively life-affirming about F9, the fifth Fast & Furious movie directed by Justin Lin.

It’s in the joyful impossibility of its physics, based more in emotion than science. When Letty (series mainstay Michelle Rodriguez) is thrown from her speeding Yamaha only to land safely on the hood of the perfectly placed Dodge Hellcat driven by Diesel’s Dom, she is unhurt not because gravity doesn’t exist, but because Dom loves her and, somehow, that is enough.

It’s in the terminal velocity the film manages to achieve, despite long stretches where the characters ponderously reflect upon their life. (Like Dewey Cox before he plays a song, Dom has to think about his entire life — flashing to both his long dead father and toddler son Brian — while in the middle of drowning.)

Yet the nearly two-and-a-half-hour film rarely drags, due to Lin’s excellent sense of pace (aided, no doubt, by the film’s three credited editors). It also helps that he and fellow screenwriter Daniel Casey keep the focus on the souped-up and grease-stained cars rather than, say, a nuclear submarine. Even the film’s foray into space travel is done via a Pontiac Fiero that’s been strapped to a rocket and launched from a jet.

But mainly the film’s infectious exuberance is conveyed in the way Lin and his longtime cinematographer Stephen Windon capture the action. Lithe rather than chaotic, the camera rarely stops moving and almost never touches the ground. It dips, swoons and glides — an ever-responsive Ginger Rogers to the cars’ Fred Astaire.

Even the film’s copious weaknesses are a reason to smile, taking us back to both the series’ B-movie roots and to less fraught periods in our lives.

The dialogue is often laughably silly (“This was definitely Mr. Nobody’s secret hideout” is one example that sticks out) and the faux gravitas that is laden on every character’s shared side-glance and half-smile would register as absurd in any other movie. But Lin so deeply understands the rhythm and tone these films are meant to have that even these howlers end up becoming more marshmallows and Maraschino cherries in a perfectly whipped Ambrosia salad.

“Well, that’s new,” Letty says after Dom loops the front wheel of his Dodge into the rope of a fallen bridge and swings them across a canyon to the other side, destroying the car but — you guessed it — leaving the heroes pretty much untouched.

No, not new exactly. More like completely unbelievable, utterly ridiculous, pleasingly familiar and after the year we all just lived through, utterly necessary. 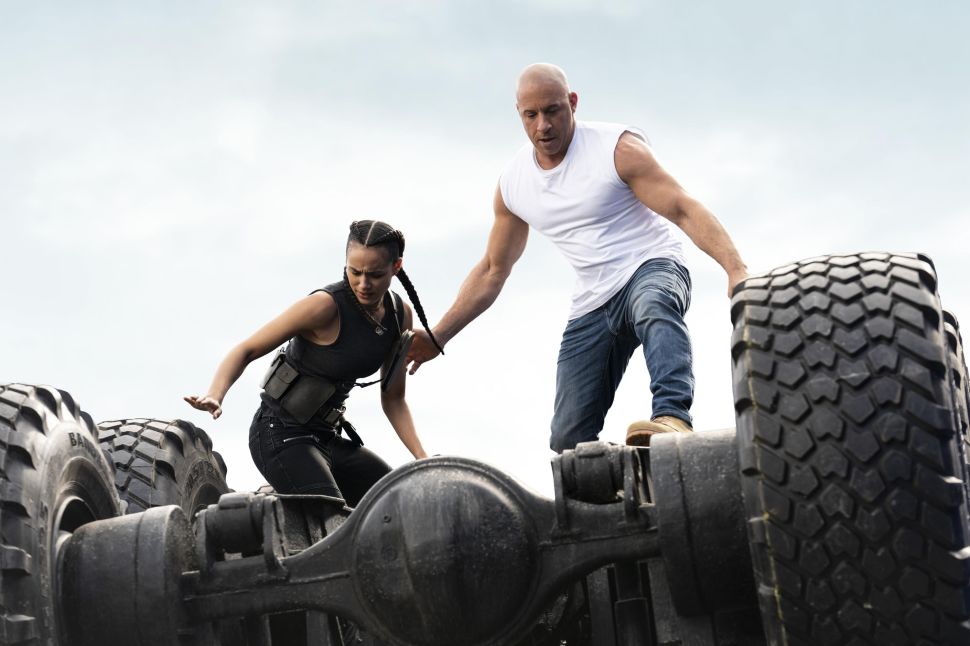