In the early days of talk cinema, hits like 42nd Street(1933), Show Boat (1936) and The Wizard of Oz (1939) helped ignite a deep passion for movie musicals. This carried on for more than 20 years with Singin’ in the Rain (1952), West Side Story (1961) and Disney’s emerging empire with Mary Poppins (1964). While the movie musical never fully faded into obscurity, its prominence eventually began to wane. Mid-century Hollywood soon became infatuated with Westerns. High Noon (1952), Shane (1953) and The Searches (1956) helped to cement that genre as nothing short of a national pastime, most memorably rendered in striking color. But Father Time is undefeated, and while Neo-Westerns have managed to make a minor comeback in certain forms, the grouping is hardly the vanguard of entertainment these days.

The lesson remains the same: no good thing lasts forever in Hollywood.

The current cultural behemoth dominating both multiplexes and small screens alike is the superhero genre. But unlike previous Hollywood heavyweights that came and went the way of Blockbuster or Quibi, capes-and-cowls have become more than a passing trend. They are the lifeblood of the entertainment industry’s entire economic model now. Skepticism connected to the idea of “superhero fatigue” has persisted for 20 years, and yet the genre is stronger and more ubiquitous than ever.

Disney’s Marvel Cinematic Universe, Warner Bros.’ DC Extended Universe, Sony Pictures’ Universe of Marvel Characters and a galactic push of surrounding multimedia superhero material have maintained the genre’s dominance with steady expansion and evolution. After 20 years of rising interest, the threat of superhero fatigue has been more or less put to bed. The bubble hasn’t popped and likely isn’t anytime soon. But that doesn’t mean the genre can remain static or stagnant. Challenges still lurk on the horizon.

Christopher Reeve’s original Superman films of the 1970s and 1980s paired nicely with Star Wars to transform science-fiction into a bankable blockbuster lane. Tim Burton’s Batman (1989) developed into a full fledged phenomenon. But the 1990s rendered comic book material a punchline in Hollywood with an endless parade of schlocky flops. Blade (1998), X-Men (2000) and Spider-Man (2002) all helped to change that paradigm. But arguably the most drastic shift for superhero movie development didn’t start with comic book characters at all.

“In 2002, The Bourne Identity shifted how the general population looked at a spy which forced a reimagining of James Bond as a grittier spy portrayed by Daniel Craig in Casino Royale,” Jason Cherubini, co-founder and CFO of Dawn’s Light Media, a film and media production company that primarily produces feature films in the action and thriller genres, told Observer. “This shift towards gritty realism in tentpole franchises was mirrored by Christopher Nolan’s take on Batman.”

Since then, on-screen superhero entertainment has expanded its cinematic universes across multiple properties and mediums that often touch on multiple different genres. Nolan’s The Dark Knight Rises is an action-packed treatise on socioeconomic division between classes. Marvel’s Captain America: The Winter Soldier is an espionage thriller. Before being snapped up by Disney, Fox’s films fell into other genres—with Logan, a Neo-Western, and Deadpool, a raunchy comedy—that just so happened to feature comic book characters.

“This acceptance by the entertainment-consuming public of the expansion of what is considered a ‘superhero movie’ has gone beyond Marvel,” Cherubini said. “For all of DC’s missteps in creating their own shared cinematic universe, they were able to tell a gritty film about mental health through the viewpoints of a known character, Joker.” Love it or hate it, the fact that Joker made $1 billion at the worldwide box office speaks volumes about the strategy.

“As for the silver screen, current and future production will be increasingly driven by foreign markets.”

DC has continued that success in the world of television by targeting the young adult audience with The CW’s Arrowverse and repurposing some superhero properties to tell atypical comic book stories such as Doom Patrol and Harley Quinn. Now, the Disney+ Marvel series are also providing an opportunity to spotlight secondary characters in ways that push the MCU forward in unique storytelling directions. When else would you see a comic book TV show commit wholly and completely to riffing on historic TV sitcoms? On the opposite end of the spectrum, HBO’s Watchmen subverted the superhero genre to add to the source material and put forth universally praised prestige television, rather than a pale imitation of what’s currently cool in the zeitgeist.

Expanding beyond the primary universes of Marvel and DC is likely always going to be an inconsistent prospect. Amazon’s Invincible leveraged audience familiarity with the genre to deliver well-earned shocks rooted in bloody and mature pathos. Netflix’s Jupiter’s Legacy was an incoherent and costly mess. So, for new heroes to enter into the landscape, they will have to find an angle that draws attention and differentiates itself from the oversaturated offerings that preceded it.

Superhero fatigue has not become a tangible threat despite the failures of recent projects such as Jupiter’s Legacy, Bloodshot or Hellboy. But that doesn’t mean the American market isn’t over-served.

“As for the silver screen, current and future production will be increasingly driven by foreign markets,” Kendall Phillips, a professor at Syracuse University’s College of Visual and Performing Arts who teaches Rhetoric of Film: Marvel Cinematic Universe, told Observer. “These markets may not have had quite as much exposure and, so the big superhero spectacle movie may still have some longevity. Although, I suspect that the big tentpole superhero film may start to lose its attraction for some.”

Phillips points to Avengers: Endgame, which served as a season or series finale of sorts to the first incarnation of the MCU, as a logical exit ramp for casual fans. As Marvel revs up Phase IV, it’s fair to wonder if it can rally the same kind of mass appeal for another big universe-shaking arc. It may be one reason why Marvel is shifting to more focus to the streaming service.

“Like anything, audiences will continue to support films until the market runs dry, the ideas run out and the execution isn’t there.”

“Culturally, I do wonder how the superhero narrative can stay relevant,” Phillips continued. “As much as superhero films are about villainy and, at times, heroes turning bad, at their core they are about optimism. Superman always does the right thing and wins in the end. Thanos may be triumphant in Infinity War, but we know in Endgame it will be our heroes who save the day. I’m not entirely convinced audiences are feeling that kind of optimism at the moment.”

In his forthcoming book, A Cinema of Hopelessness, Phillips writes about the MCU and points out that while these are stories of heroic triumph, they are also riddled with narratives of mistrust, betrayal and even failure. Following years of political upheaval and 18 months of a global pandemic, these darker moods may be even more prevalent in our culture at the moment.

“Every franchise with the exception of James Bond gets people tired,” Barry London, former vice chairman of the motion picture group at Paramount Pictures, told Observer. “Like anything, audiences will continue to support films until the market runs dry, the ideas run out and the execution isn’t there.”

What the next superhero evolution will give us

Entropy has taught us that adaptation and evolution are necessary ingredients for longevity. We are going to see further expansion of the superhero stories being told as necessity is the mother of invention. With Marvel regaining the rights to X-Men and Fantastic Four, audiences will see new iterations of iconic characters in the coming years. But the MCU is also smartly allowing older heroes such as Robert Downey Jr.’s Iron Man and Chris Evans’s Captain America to make graceful exists and introducing new heroes to take their place.

“Developing the IP as a comic book is much less expensive and allows the creator to develop potential storylines that will eventually make it to the film, while building some level of audience recognition.”

“It’s a strategy to rejuvenate interest and continue it rather than let these same heroes who have become so well known continue until audiences get tired of them” London said.

But increasingly, more obscure characters and properties—such as Netflix’s The Umbrella Academy and Amazon’s The Boys—will lead the way. (Don’t forget, Iron Man was considered a B-list character before Marvel and Robert Downey Jr. turned him into a global icon).

As the public continues to embrace comic book stories as mainstream entertainment, Hollywood has increasingly chased a nearly endless war chest of comic book IP. This has opened the door for Netflix’s recent release, Sweet Tooth, based on the DC Vertigo comic books, as well as its upcoming adaptation of Neil Gaiman’s Sandman. We’ve also seen films like V for Vendetta, 300 and Sin City as examples of non-superhero comic books that have had successful adaptations in the last 20 years. New-to-screen heroes such as RoboCop, Darkman, The Matrix and The Incredibles aren’t impossible to develop into successes these days, but the degree of difficulty in doing so has risen exponentially.

What’s more, creating new IP in the comic book medium first before adapting it for the screen, similar to what AWA is attempting to do, is a future Cherubini envisions for the industry:

“The idea of new original superhero content going straight to the screen is probably not going to be the norm. With so much known IP to be farmed and developed for film and television projects, I think we are more likely to see existing smaller IP developed than we are to see things completely original. This isn’t to say that no original superhero stories will make it to the screen, but from what I have been hearing in talking with independent filmmakers is that they are now more likely to attempt to develop their ideas as a comic book first before trying to create a film or television show. Developing the IP as a comic book is much less expensive and allows the creator to develop potential storylines that will eventually make it to the film, while building some level of audience recognition.”

Superhero fatigue hasn’t remotely set in despite years of warnings and a competitive wasteland littered with flops. But that doesn’t guarantee an infinite runway of audience anticipation. At the end of the day, the entertainment industry is akin to sailing blind at night. No one knows where they might end up.

“These things peak and then they start to disappear,” London said. “But movie trends can be cyclical and more about the rejuvenation of an idea. For every rule, there are no rules. But movies that entertain will generally win.” 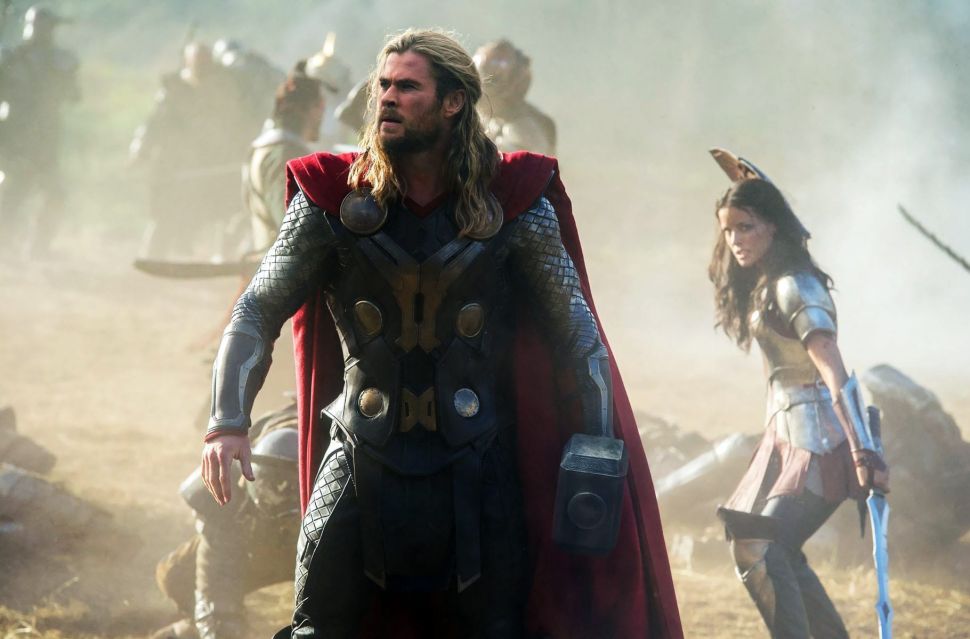