Both women were born only four years apart – Hesse in 1936 and Wilke in 1940. They also were no strangers to personal hardships. Hesse and Wilke were both Jewish. Hesse came to the States in 1939 at the age of 3 with her family fleeing the Nazis during the start of World War II. Hesse’s mother committed suicide when she was ten years old. Hesse tragically died at 34 after three operations to a brain tumor. Wilke’s life also possessed a similar level of catastrophe, her father died suddenly when she was 20. Wilke even passed away tragically from cancer at 52. These biographical similarities almost map onto one another and the traumas they both experienced would help to later fuel their art. Wilke’s later work, for example, which is not featured in this show documented her harrowing self-portraits towards the end of her battle with cancer. However, the roots of this can be seen in “Erotic Abstraction”.

Despite both artists’ adoption of a minimal aesthetic, process-based works, and utilizing new materials of the time such as fiberglass and liquid latex, this is something that would come to define Hesse’s work in particular. It was Hesse, after all, who was groundbreaking in her use of latex for sculptures in the late 1960s, which is something that other artists, like Wilke, began to adopt in their studio practice.

While Hesse and Wilke do intersect, their work also very much diverges. Over time Wilke began to adopt a more performative element to her pieces; two of her early performances can be seen in this show. These performance elements are apparent in the works within “Erotic Abstraction;” something she would continue to engage with until the end of her life. Hesse, on the other hand, maintained a studio practice that was very much focused on the object she was creating. While she did document the progression of her work, engaging with themes involving the body, Hesse did not employ the same performance tactics Wilke would go onto explore.

“Erotic Abstraction” consists of two gallery spaces located on the ground floor level of Acquavella. The main room features a variety of Wilke’s small scale sculptures as well as collage, sculptural assemblages, and documentation from her performance-based works. The second room located off the main entrance is filled with many of Hesse’s tactile and fragile sculptures. However, both rooms feel very separate. One thing that still seemed counterintuitive, in terms of the presentation, was the choice to present each of their work separately. Both artists’ work were confined to different rooms, which didn’t assist in encouraging more of a dialogue between them.

Wilke’s work is animated and alive. There is a vibrancy and even comical element to some of the works. Both compelling and in your face, while maintaining subtlety. While Wilke is directly playing with vaginal shapes that become abstracted, almost erased or deconstructed. Wilke’s piece The Orange One from 1975 is particularly fantastic.

Consisting of metal sheets and latex, the flesh like layers fan out and appear petal-like or folds of skin. There are various holes that Wilke has deliberately punched throughout The Orange One, creating breaks in the skin-like material, giving your eye something to focus on. The various layers are held together with simple silver thumb tacks. It is both utilitarian and fragile in its design. The shape repeats itself like an accordion in this piece which consists of, at my count, at least 30 layers. Upon closer examination it is hard to determine where the edge of the metal begins and when the latex layers emerge.

Hesse’s work on the other hand has a commanding nuance about it. The works possess an almost primal component. Many of the materials she is using become transformed and take on a new meaning. There are pieces that extend her drawing practice out into 3D forms while also taking risks with materials and shapes. It is subtle in its presentation but the power that exists behind these works of art radiates in its simplicity, elegance, and complexity. They are biomorphic and reference the female form in indirect ways that sometimes become erased.

Hesse’s 1969 piece Sans III is a standout. Consisting of 49 connected units, this piece extends from the wall to the floor in a straight line. The latex gives an amber glow but their taut surface gives a skin-like appearance. The units resemble conveyor belt bins, and while the piece is incredibly fragile, it does seem to suggest some movement or a kinetic quality given the way it is presented.

Another piece by Hesse from 1966, Untitled (Bochner Compare) is part of a larger exploration of the circle that Hesse would investigate throughout her career. This form gets revisited in different materials from washers to cords to ink drawings. Untitled uses Papier-mâché and cord to create a breast-like mound. Its 3D shape announces itself and activates off the piece of board it was created.

The notion of time and the temporal is also another element that is on display within this exhibit. This comes into play when thinking about how fragile these works really are, even the materials they used were meant to break down over time which further underscores the life of an artwork. The exhibition catalog features a number of photographs of the artists at work in their studio handling fiberglass, liquid latex, and other found objects. What is so revolutionary about the work is how they were actively challenging the status quo and the minimal aesthetics of this era, making work that would define this time.

Correction: This review originally said that Eva Hesse was 39 when she died, this is incorrect, she was 34. 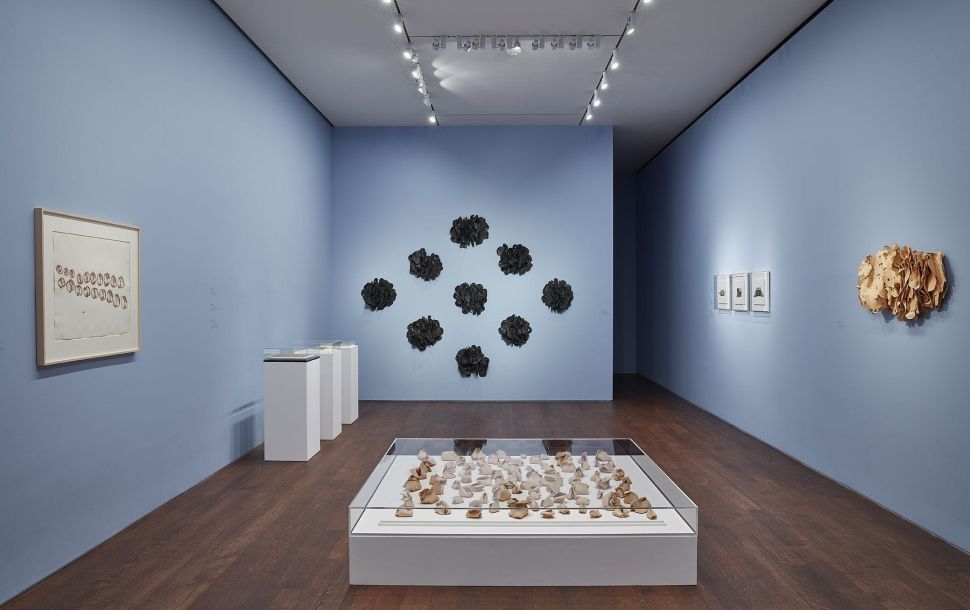